Holy Gabriel’s ghost!  The sixth season of The 100 continues to reign with The Gospel of Josephine.  Eliza Taylor delighted us with her astonishing and brilliant performance of Josephine Lightbourne.  She quickly washed away any remnants of Clarke, transitioning to a completely different person.  Additionally, Bellamy and the others discover the cryptic truth about “living in paradise.”  The episode was definitely taking an explorative mind trip and placed everyone on their tip-toes.  Written by Georgia Lee and directed by Ian Samoil, The Gospel of Josephine rang high as it delivered emotional and moral variables and making its note as one of the most satisfying episodes.

I Am Josephine Lightbourne.  Nice To Meet You

Here comes Josephine Lightbourne, rebirthed in Clarke’s exterior, and ready to pounce with her manipulative charms.  In her new Ferrari of a body, Josephine gets the inside scoop concerning Clarke’s people.  The first ones she seeks is Spacekru.  There were a few quirks that off-put Clarke, but no one seems to notice anything major.  Except for Gaia-who like Clarke holds an iron clast protection on Madi-found it completely odd that Clarke would do a 360 and sent Madi off to school. 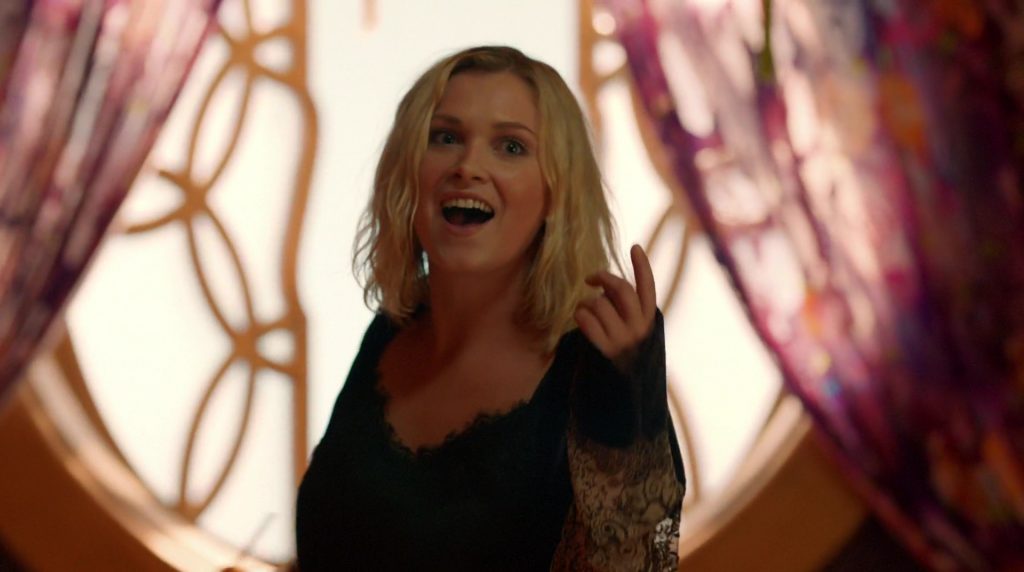 Then we then have that cute, but awkward open sex talk between Josephine and Bellamy.  Clarke has never mentioned her love escapades with him before, so it was funny to see this.  Bellamy probably nods it as the overall happy effect of Sanctum.  Yet, he’s happy to see “Clarke” happy.

I mean, his overall expression though of the entire conversation:

I assume that Josephine held nothing back when it came to her own sex life, so why not play it up for good measure?

As we journey into Clarke’s—I mean, Josephine’s story–she clicks in with Abby, who is heads over in books trying to find a cure to save Kane, notices that Clarke is writing with her right instead of her left.  Abby, albeit being so absorbed in her work and desperation manages to see this little out-of-character whim.   She brushes it off as nothing major though, as everyone has a ‘bad day.’

But she hasn’t witnessed the Naming Day ceremonies or been to the medical lab behind the skeleton closet, so why should the thought bubble up?  The most that she could come up with is that her daughter was having an off day. 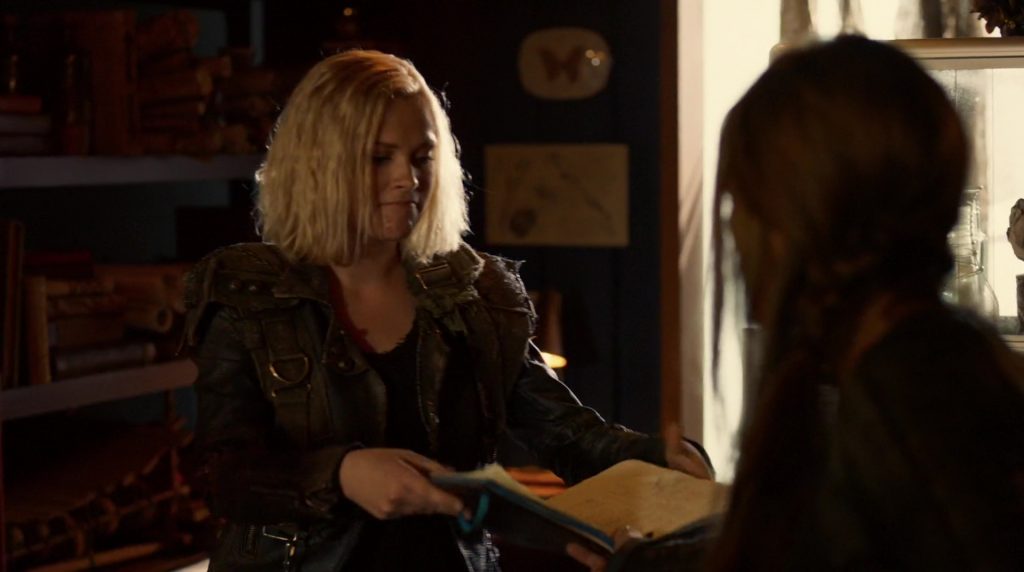 You just don’t know how off Abby, but I am afraid that you’ll find out soon enough.

The more Josephine hangs around Bellamy, Murphy, Jordan, and Gaia, the more suspicions arise.  Bellamy is the first one (why shouldn’t he be?) to figure it out, after seeing the cold, impassive, nonchalant, and unempathetic expressions that she gave in the lab.

As if that wasn’t enough to go on, they all had a meeting with the joining of Madi in the bar.  They debated leaving vs. staying and upon listening, Josephine lights up when she heard that Abby can medically create Nightbloods.  She knows now that this is the key for her people to have absolute immorality.   It can also give her the push and approval from her parents to finally start the breeding program called “Oblation,” which would make all Sanctum citizens have royal or Nightblood.  The cycle of finding hosts can finally end; there will be no limitations.

Thanks to Jordan making a scene with Delilah/Priya, Josephine slips out, but not without Bellamy noticing.  He’s determined to get to the bottom of Clarke’s personality change.  Believing that the best way to trick her is by speaking Trig as they’re both fluent.

Why use the language when there were other things to trip Josephine up such as the radio calls or mentioning Monty and Harper?  My guess is that since she was confused prior when Gaia used Trig, then again when he spoke.  He used this to his advantage, but at the same time, Josephine picked up on his game. 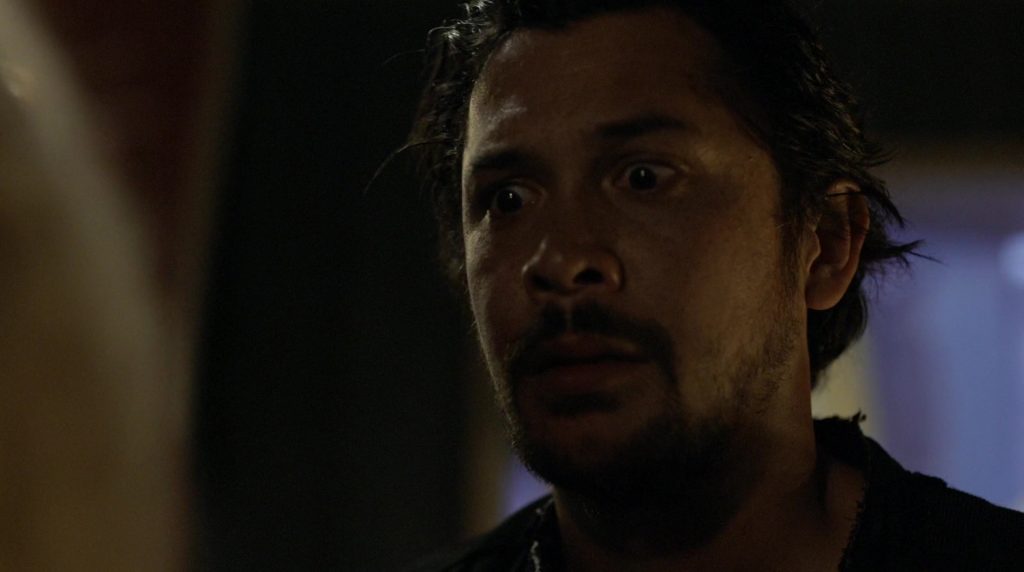 “Who ARE you?”  Bellamy demanded, as he literally pins her against the wall.  The horror cascades over him as he realizes that Clarke is gone and that this stranger has taken host.  It’s a genuine rip to his head, heart, and soul as this was his partner who stood by him, despite some misalliances. Bellamy’s broken emotions conveyed their relationship as a whole—what they’ve been through together, what they shared privately, and how they were able to become “together” emulated just how important and valuable they are.

“Josephine Lightbourne.  Nice to meet you.”

The erasure of Clarke Griffin will never alter the meaningfulness and will only strengthen.  It’s too historic and impactful to let go.

The ultimate blow was Josephine paralyzing Bellamy with the sedative, leaving unable to physically react, but to take in full consciousness.  There is no doubt that Bellamy will be prisoner just so he doesn’t go blabbing out the truth.

His absence will not go unnoticed or not without a word from his friends and girlfriend.  Bellamy is vital to the group as we all know, so it was an error of Josephine not to clue in.

She is doing a crappy job at playing Clarke; this will likely be her downfall.

Josephine has one more manipulative, sociopathic ploy up her sleeve which she uses it on Murphy.  He like, Bellamy, is horrified at Josephine, and once she informs him of Clarke’s death, he’s even more freaked out.  To calm Murphy, she offers him a life of immortality. 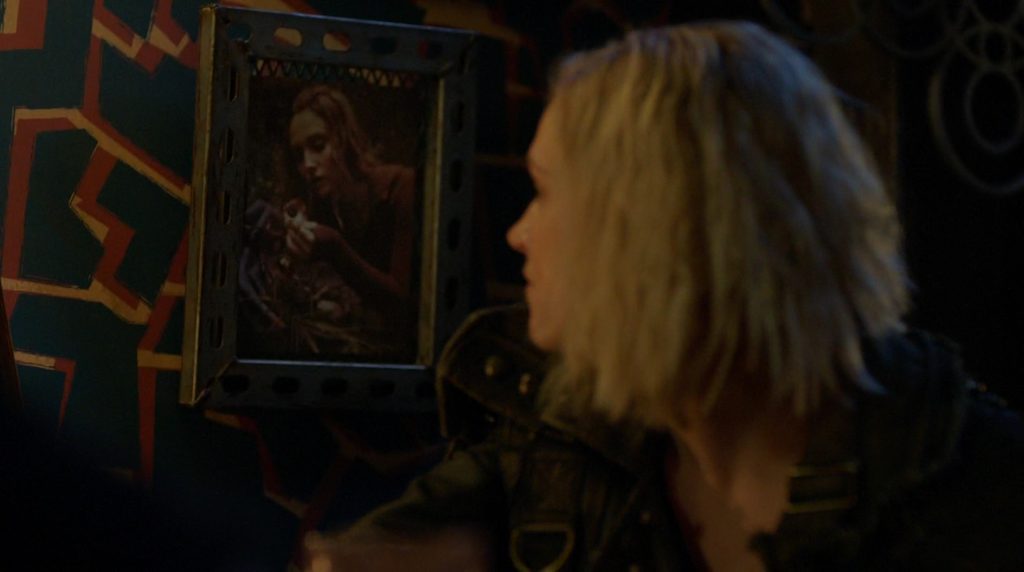 Murphy can’t resist the temptation as he had visited hell.  The experience obviously left him shook, so immorality, even though it’ll mean someone will be sacrificed to host his memory drive, is too good of a deal.

However, this all could be very much a ruse as Murphy could be already planning to stop Josephine and bring Clarke back.

The guy has been treating Clarke like a virus, yet Murphy knows just how special Clarke is, so he may find this opportunity to bring her back from the dead.

Or he could totally be doing his Murphy thing, turning once again on people.

Or, he could be once again, the unlikely hero.

“His Dad Taught Him To Hack”

Jordan is so not ready to let Delilah go as they shared a connection and he feels like she could be “The One.”  Jordan may be getting ahead of himself as he had no previous relationships, but you must admit, that Delilah and he did make an adorable pair.

Heartbroken, but not to be defeated, Jordan does an investigation.  Backtracking to the night before, he knows that something went on during Naming Day.  Reflective of his father, Monty, Jordan wants to get to the bottom of the situation.

Which I love as a great remembrance to the late Monty Green.

Bellamy, Jordan, Gaia, Murphy, and Josephine (who has a little crush on Murphy) enter Sanctum’s holiest place inside the Palace. The gang scoops out the skeletons, unaware of their true essence (well, all, but Josie), and the most curious one is Gaia.  She believes that the skeletons were the commanders remains. 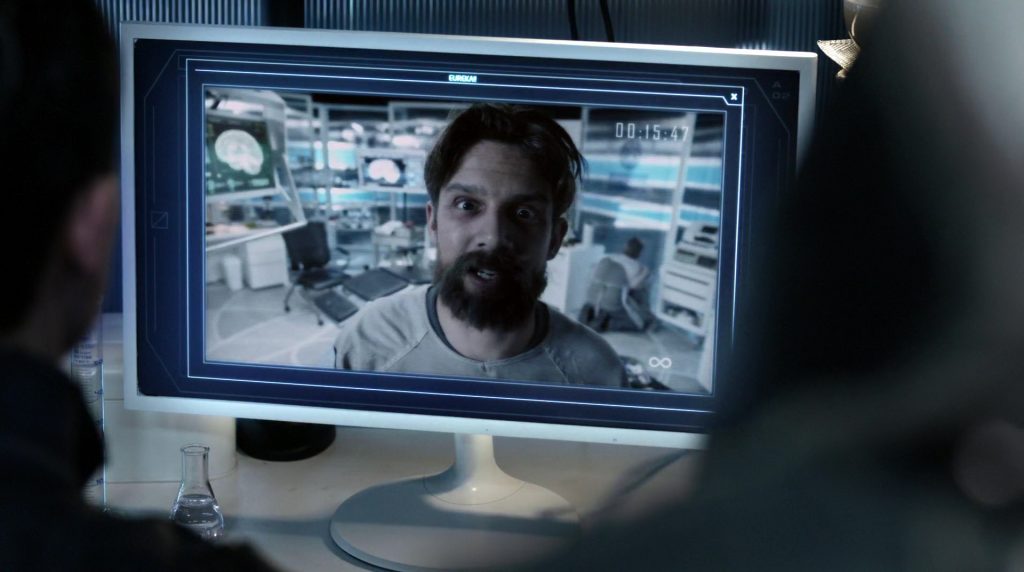 The real revulsion begins when “Eureka” plays on the computer.  An aging Gabriel breaks medical history as he finally discovers that an adult embryo can support a Prime’s memory drive.  Working with him is an older Russell Lightbourne.  The test subject is Brooke, who didn’t give her consent to be the host of Josephine.  It took them twenty-five years to try to bring back Josephine.

As for Josephine, all remnants of Brooke have washed away, and she fully embraces her new personality.

Jordan is openly the most upset of all because it must have felt Brooke’s fear with the disappearance of Delilah, who is now Priya.  He just really couldn’t fathom that someone would do such malice to another human being.  Just to appease some God or religion?

To preserve the line as the very threat of Prime extinction is very much possible?

Or are these people simply just evil, enjoying the sadism that follows the ordeal?

Josephine wrapped it up in to fit Sanctum’s perverse society.  Okay, just one of the reasons.

“Familial love is a powerful motivator.  People will do anything to ensure the survival of the ones they love.”

After witnessing the video, just how can the group stop the madness?  They certainly don’t want the same fate for Clarke, who just takes the whole video without feeling or emotion.

What they don’t know yet, is that Clarke is Josephine.  Oh, what a mess it will come to once they do. 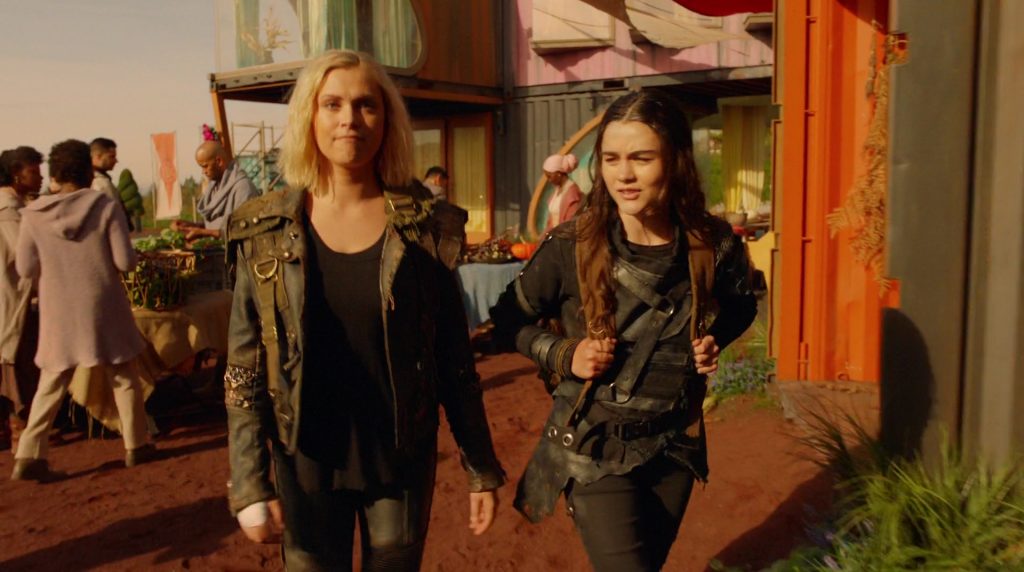 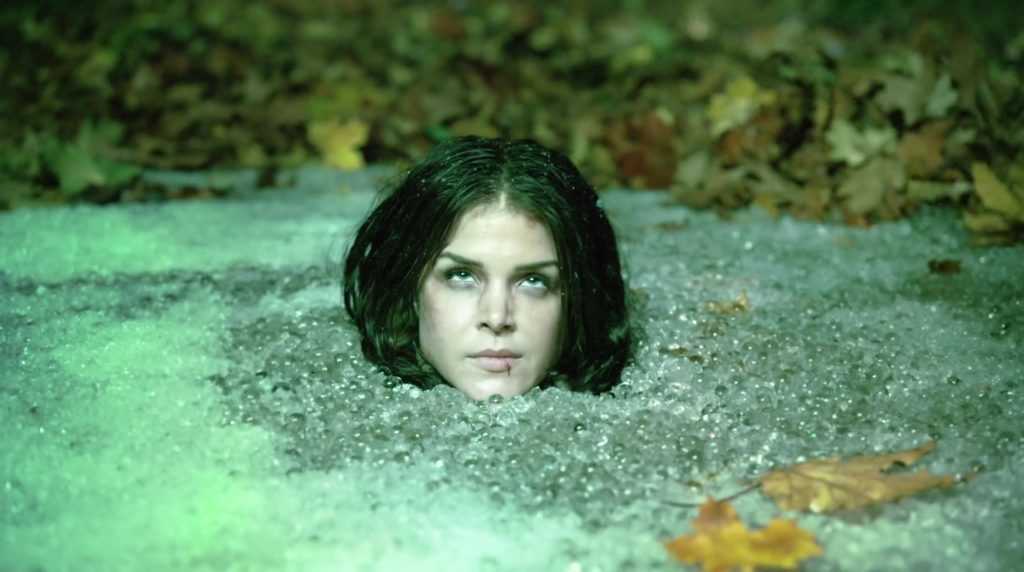 What did you enjoy about The Gospel of Josephine?  What did you think of Eliza Taylor’s performance?  Do you think Octavia has finally wakened up?  Is the moon going to blow up by Earthkru because they want Clarke back?