The 100 The Dark Year Recap-Review

The 100 The Dark Year opened up a lot of explanations as well as delivered a few yummy plot twists.  While some situations may seem devastating beyond any human comprehension, the narratives provided gave the viewer understanding and some blow-hard emotions.  Here is the recap-review for The 100 The Dark Year.  Just a warning:  I advise no snacking or drinking of any kind during the reading.

The 100 The Dark Year Recap-Review

“She Bore It So They Don’t Have To”

Cannibalism, marching to war, and switching sides was the recipe for The Dark Year.   Written by Heidi Cole McAdams, the episode shed the light of what happened during the darkest chapter in humanity, and what drove Octavia to madness.  Also, if you love strong women with attitudes intact, than this is the episode for you.

The Dark Year also recalled some very powerful sentiments from season two and made a better understanding of the Mountain Men.  The 100 itself is like a book (I know that there’s an actual book); you flip back the pages to connect each scenario.  The more you read about it, the more you are driven into the characters, plot, and comprehension. 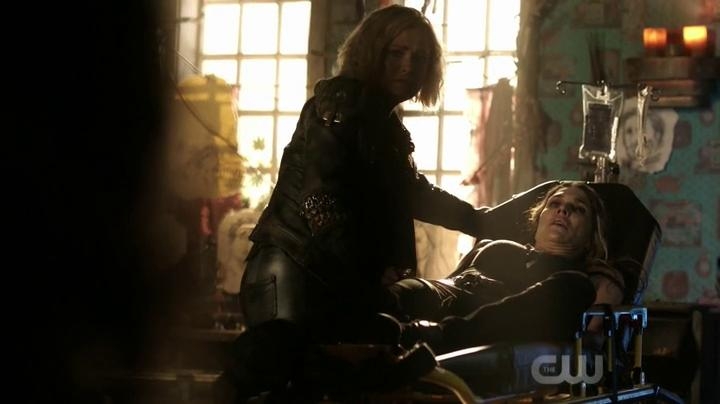 There was also the reasoning of Abby’s addiction, and why she allowed herself to be dug deep into it.  Abby sharing hers with her daughter (and granddaughter) indicates that despite their time apart, the Griffin women still share a strong bond.  If Abby didn’t trust her Clarke or she wasn’t empathetic, then Abby would not have told her great pain.

Let’s take a bite into The Dark Year if you dare.

To Eat Or Not To Eat…That Is The Question

Nope, that really was the in-depth, humane question of The Dark Year.  The Bunker civilians are about to enter into “Starvation Mode” as there is not enough food.  10% of the daily caloric intake is protein, and since the soybean crop suffered a ruination, there is only one other option.  To eat those who died in the arena.  At, first, it’s preposterous, at least to Octavia and Kane.  It goes against any morals that people have-even though they’re in a life-or-death situation.

Through the repressed memories of Abby, the people of Wonkru had to eat the remains of their own.  Those who did not want to, end up dying.  The latter was made clear by Octavia as she took on a few who didn’t want to cooperate.   Kane was very resistant, but when he failed to convince Octavia not to kill the ones who refused, he changed his tune.   At the same time, I understand Kane’s and the others’ point-of-view.  It must feel like a slap in the face to consume the one you loved, all for the sake of life.  Yet, when it comes to surviving, we make the most unfathomable choices just so we can breathe another day.  It’s either them, or me when it comes down to it, and at the end, if we are still breathing, we must cope with the guilt and trauma that tail ends those choices. 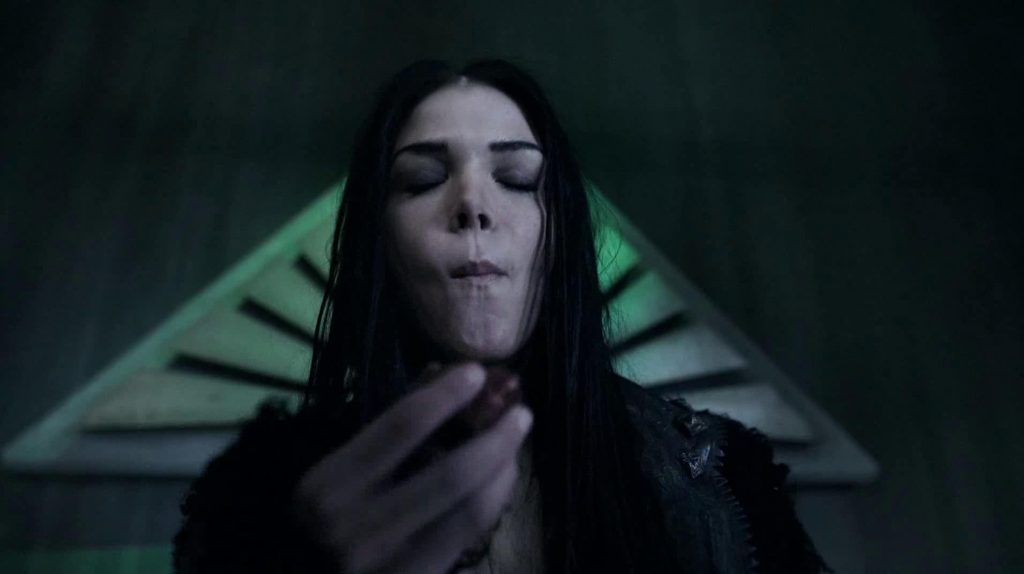 And that is what Abby is coping with-her decisions that fabricated into her dependency.  She bears the burden, pain, and weight of the incident so that others would not have to cope.  Octavia has taken on a much different aspect in terms of holding anguish; but not any less dark or depressing.  By allowing herself to become Blodreina, Octavia bores her inner pain so that her people wouldn’t have to.  Unfortunately, the devises are not left unnoticed and those who are close to them tried to help or they simply broke away.

“I Never Said That I Was A Hero”

Madi watches Clarke treat her mother’s overdose and seems rather indifferent about it.  The stories that Clarke told her about Abby are nothing like the woman she sees presently.  To add to that, Madi is ashamed and disappointed in Clarke.  She has sided with McCreary to enable him to win the war.  At first, it felt out of context and perpetration for Clarke to switch sides.  If it was for the protection of her daughter, Madi, then changing loyalties may have been her best and only option.

The ingenuity of Madi is that she sees the world in a brighter hue; the goodness in people, and having the premonition of things to come.  This makes her character one-of-a-kind and stands out.  Of course, each character stands out in his or her way, but perhaps being so young gives her that glow-up.  I am beyond curious of how Madi will comply as Heda (I thought she was glimmering Lexa.) and how it will fit into the season five finale. 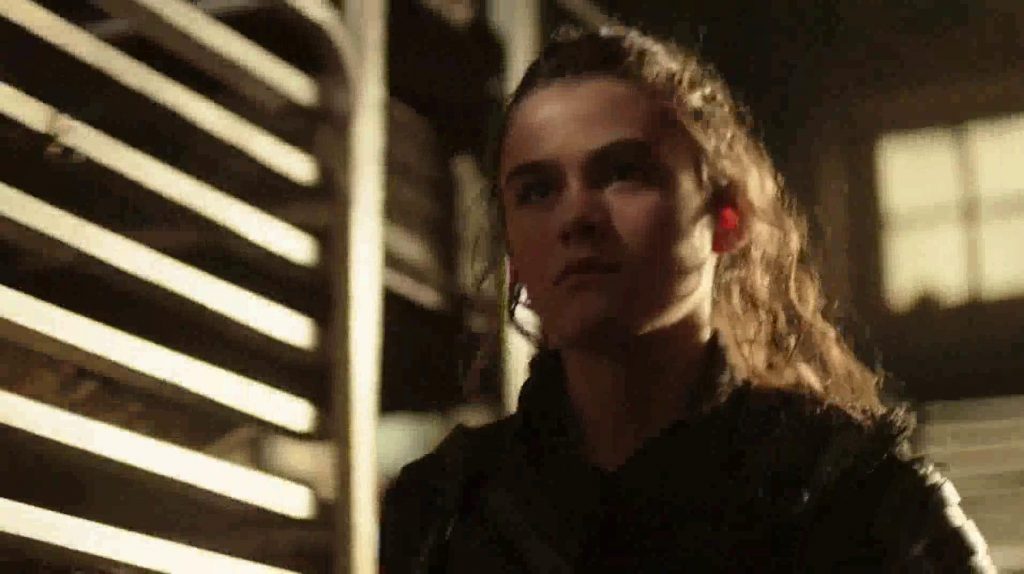 Would Madi be safer with Wonkru though?  Well, that is tough to decide as Bellamy broke her trust in the last episode, The Warriors Will, and she is deathly afraid of Octavia as she may harm Madi for being a Nightblood.  Yet, the difference between the two and McCreary is that McCreary murdered without reason.  The Blakes killed for the survival of their people.

Just like Clarke had to do by pulling the lever at Mt. Weather-but she hasn’t shared that tale with Madi.  Madi got that information from the Flame; Clarke’s memories are shared within.

But Clarke is doing everything she believes that is right for Madi, even though that it may feel wrong to the viewer.

Something tells me though that Clarke may have something up her sleeve because I don’t ever believe that she will put Bellamy (as much as she is pissed off at him) in peril.   She may even think and accepted that he is dead, as given to her thinking and behavior last episode.  Despite the latter, that is not Clarke, but if she decides to stay on the McCreary side of things-without a special force of her own, then we are going to have issues.

And we don’t want that.  Come on Clarke, you are the heroin in Madi’s eyes, don’t ruin it for her.

Octavia leads the way to war in Shallow Valley, and Bellamy has had it with her at this point.  This was the break between the Blakes that I was dreading.  To Bellamy, Octavia has clearly lost all reason and is no longer his family.  Oh, the pain and tears that was displayed on her face!

Bellamy only wants to see his family and girlfriend again, and while he may look like that he is siding with Wonkru, my belief is that he will come to the aide of Spacekru.  It makes the most logical sense and fits the narrative. However, I do have that sliver of hope (stubborn), that the Blakes will rekindle their sibling relationship. 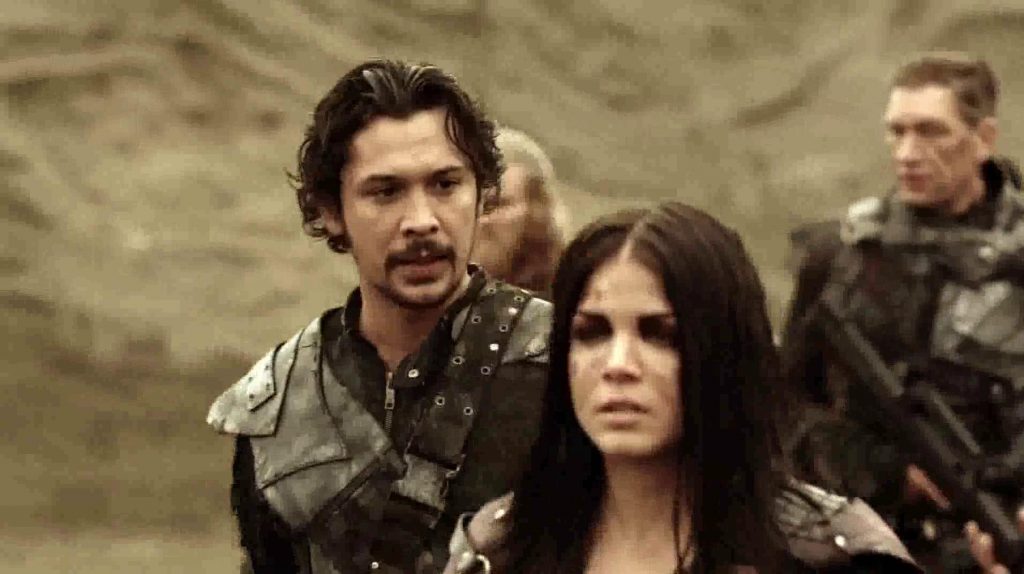 For the most part, the familial chemistry between Bellamy and Octavia is magnificent and brutally honest.  Yet, it can become quickly toxic when one shows the other animosity and hostility.

Arguments and differences aside, they work together to go over battle plans to take down McCreary, and that was the only neutral moment that they had in The Dark Year.

Now, if only Octavia treated her brother nicely, she would not have this issue with him.  If only you shared The Dark Year experiences with him, Octavia.  He may understand.

Bellamy and Monty speaking around the fire with hopes and dreams of living in the Valley peacefully made me shed the tears.  Bellamy made me shed even more when he stroked Echo’s sword, missing her.  Can’t you give the man another second of happiness?

Under The Command of General Echo

The Warriors Will was the episode that revolved around the Bunker sword fight between Bellamy, Indra, and Gaia.  None of whom died-and that is a wonderful thing.  The Dark Year ventured off into the resistance formulation subplot under the leadership of Echo.  Being a spy and natural in the woods, the role of general suited her.  I know there’s a lot of polarizing opinions when it comes to this character and that it is not a terrible thing.  We just have our own personal outlooks; it’s what makes the analyzations and theories fun. 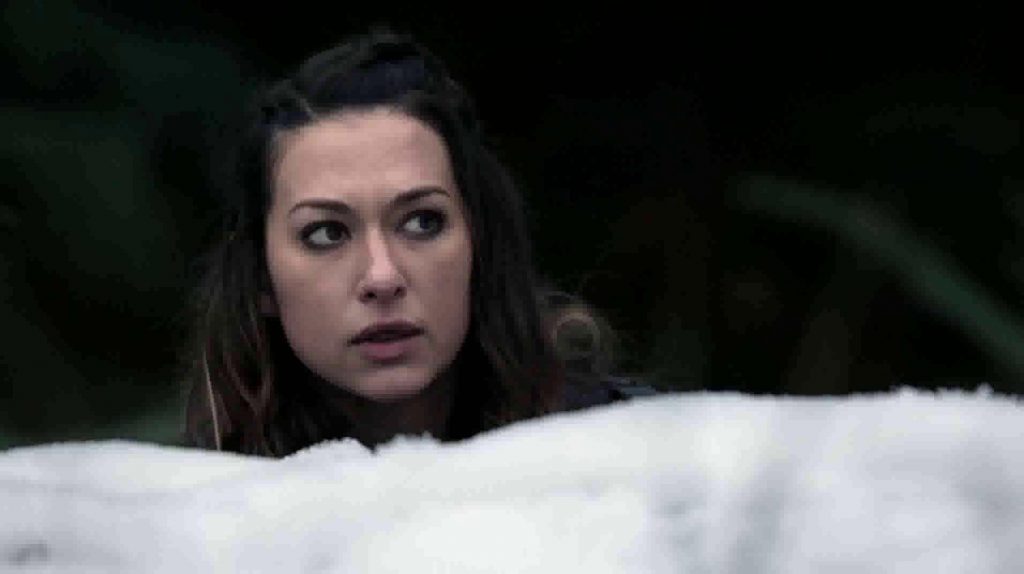 Once Echo is in her natural element, she takes control and gains momentum.  She figures out a strategic plan that Octavia *may* agree to, and after witnessing Shaw kill the Eligius men, she accepts him in the family.  I guess killing him is off the list.

Echo dealing with Clarke though after she switches with McCreary is more of an exasperated reaction.  I would be suspicious too if the ally became the enemy.  Of course, once Echo learns the reasoning behind the switch, she’ll understand.

We do have the large fight sequence amid Clarke and Echo in the two-part finale.  I hope that this is just a build-up for momenta, like the arena with Bellamy, Indra, and Gaia.  It must be a very big issue for this though? Any guesses? 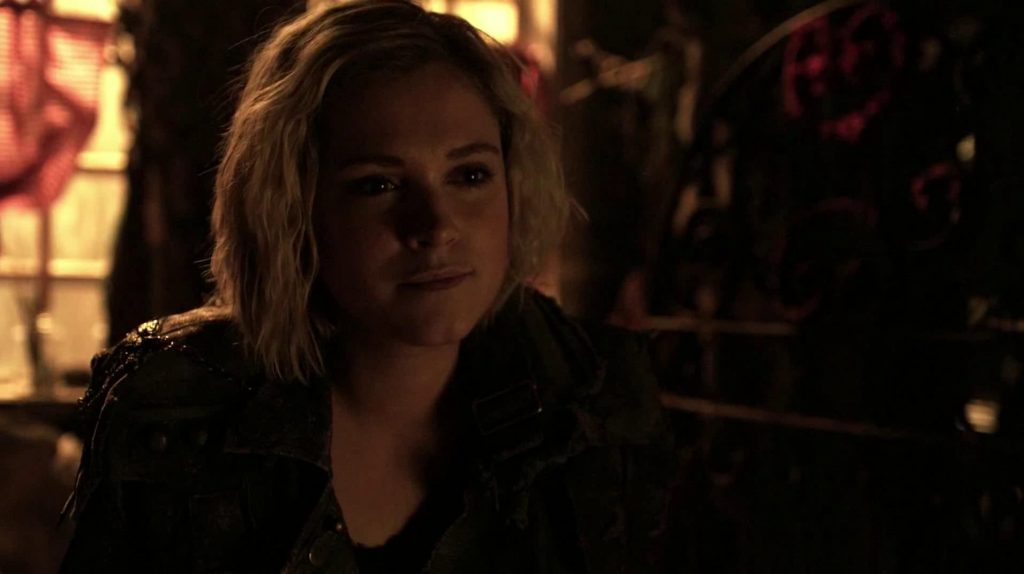 Yet, until then, my breath is being held captive in a locked box.  I love both strong, gritty women, and it would be such a shame if the battle was something trivial.

Towards the end of the episode, Emori and her share a hug and spoke about Bellamy.  She misses him clearly (after seeing Raven and Shaw kiss), but she knows that they will “be together soon.”  Aww, my poor heart!  Don’t kill me for shipping Becho, but I also enjoy Bellarke. You can ship both without perversions.

Their plan though may go down in flames as Diyoza and Kane turn against them by going to McCreary.  Why did you have to ruin it, Kane?  And why did you leave Abby?  Sometimes, his thinking is not always the sharpest.  This makes me worried about how this roll out.

The Dark Year perpetrated a mix of emotions ranging from excited to disgusted, to curious, and sadness.  Yet, it is not The 100 if does not execute multiple feels and thoughts. Also, I felt the episode should have been linked closer to The Red Queen as it did shined Octavia’s Blodreina alter ego.  That is just a minimal altercation though.

What we really need are the Spacekru flashbacks.  Why we need them is because their contextualization is lacking and it would make the characters stronger.  I hope that this will be explored more in the two-part season finale or I may have to go on my thousand and one theories about how they became a “family.”  Which is fine, but I prefer it to be more concise. 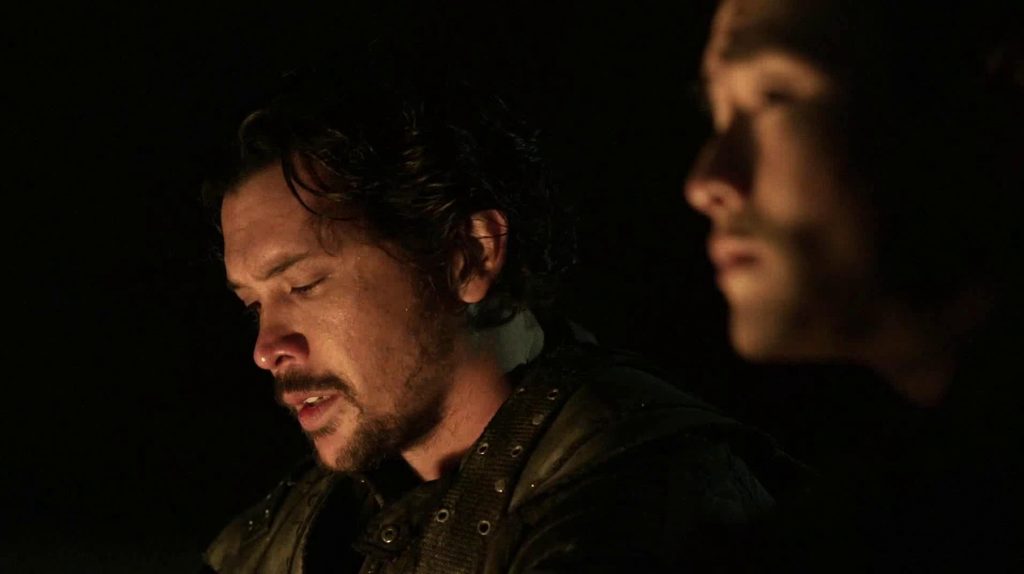 I am also glad that Raven is finally happy, she truly deserves it.  In fact, she is glowing!  And Shaw is not a bad guy.  I like him! 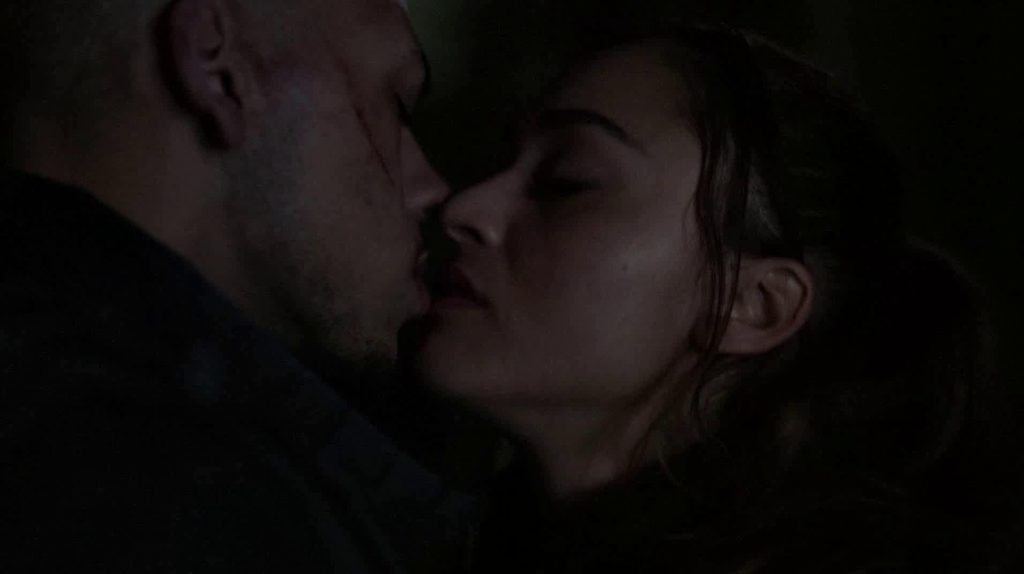 What did you think of The Dark Year?  What would you do in such dour circumstances?

Do you agree with Clarke going with McCreary or Kane willing to betray everyone for his ideal paradise?

Next time on The 100, Damocles Part One– the first half of the season 5 finale!  What will be the result of the war?  Will anyone ever find the peace that they deserve?  Who will die and who will take charge?  Find out this Tuesday at 8/7 CT on the CW!

Final Ratings For The 100 The Dark Year

The 100 Damocles Part One Official Trailer And Promo Photos

The 100 A Sort Of Homecoming Press Release

The 100 The Stranger Preview