Hesperides delivered many a maiden protecting what is theirs in this week’s The 100 episode.  Filled with action, emotion, and a bit of angst, it definitely kept my eyes wide and focused.  Check out the recap-review for Hesperides as it will relive the journey.

Nymphs of the Night

Season 7 has been filled with surprises thus far and Hesperides is no exception.  It was a well-landscaped and emotional episode.  Written by newcomer Sean Crouch, Hesperides dug deep into the rescue mission for those NOT on Sanctum, but it also gave us a sexy Gabriel and a concerned Clarke.

Yes, I am loving it.

A Child Left Behind

The opening begins with a flashback with young Hope after she discovers that her mother and Aunty O disappeared.  She is left on her own and is forced to live an isolated life.  She does okay for a while until a mystery man shows up.  That man is Dev, a prisoned Disciple, and he takes her under his wing.  It is a genuine and true bond between them, and he teaches her all that he could about the Anomaly-including some elaborate knife throwing.  When the time comes for Dev to be sent back into the Anomaly (ten years) Hope tries to keep him on Beta, just like they planned.  But she flinches when it comes to killing the capturer, who kills Dev.  For Hope, it is a traumatic wound because she has lost another loved one. 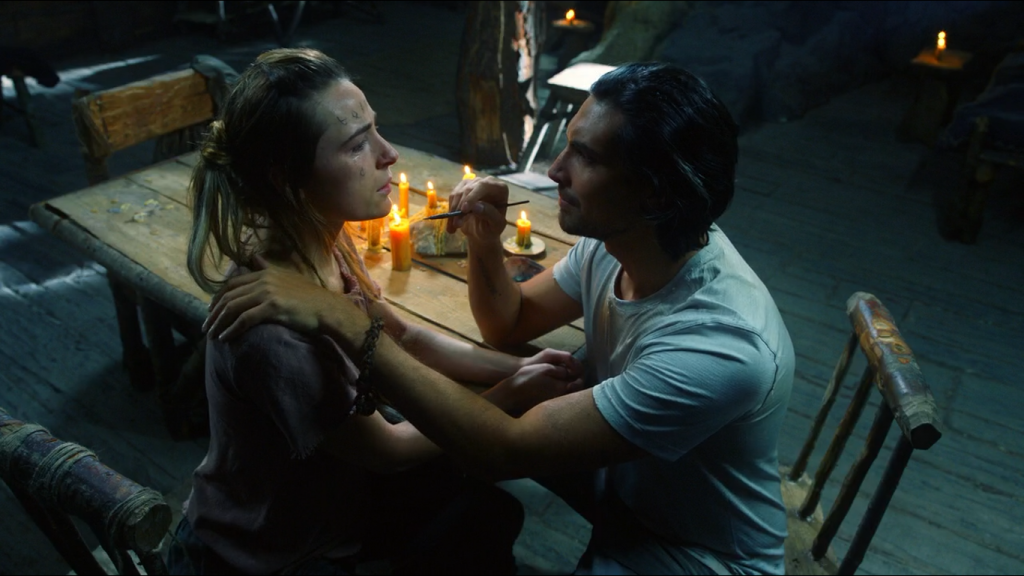 Dev reflected Bellamy’s relationship with Octavia in lots of ways.  Bellamy opened Octavia’s visionary world from life under the floor; Dev opened the world of the Anomaly to Hope, and it obviously propelled her even more to save her mother and Octavia.

Among the wonderful bond that these two shared, Hope had a family once again.  At least she did not spend the latter half of her development alone.   That would have suck.

Flash forwarding to the present, Echo, Hope, and Gabriel are still stuck on Beta, the time passing slowly by.  They have established themselves as a family unit with gardening, cooking, and training.  Echo is still on the edge about spending five years on Beta, but she does make use of her time with the elements.

Orlando appears yet again, but he must be lured in so that the trio can learn more about Bardo and how to access it there.  The former Disciple is a level 12 member, so he will be of great knowledge along with usage to the three.   Another perk of being a level 12 is having full access in Bardo, so with this, he will know where to find Bellamy-assuming that he is still on Bardo. 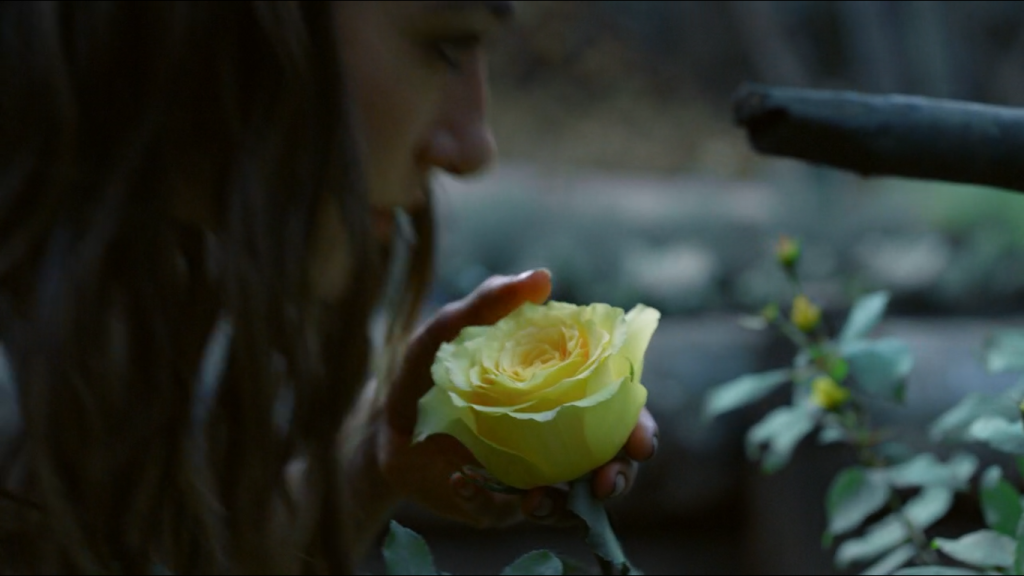 Once they successfully lured Orlando, (he actually lures them) after failed attempts, he begins the hardcore training that a Disciple must know.  In exchange for his guidance, Orlando samples some homecooked meals and a place inside the cabin.

In the years following, Orlando feels like he became a family member and he is no longer alone.  With people around, he breaks out of his shell, accepting this seemingly warm circle.

With one day left until his Absolution Day left, the training is complete.  All that is left are the final touches and the plan itself.  Echo and Hope are sporting short new haircuts, new outfits, and symbol tattoos.  In perspective, the makeovers reflect a new beginning as they will carve their paths in finding their families.  As for Gabriel himself, he is just crazy-curious about finding out what inside the Anomaly, but maybe he has another reason too. 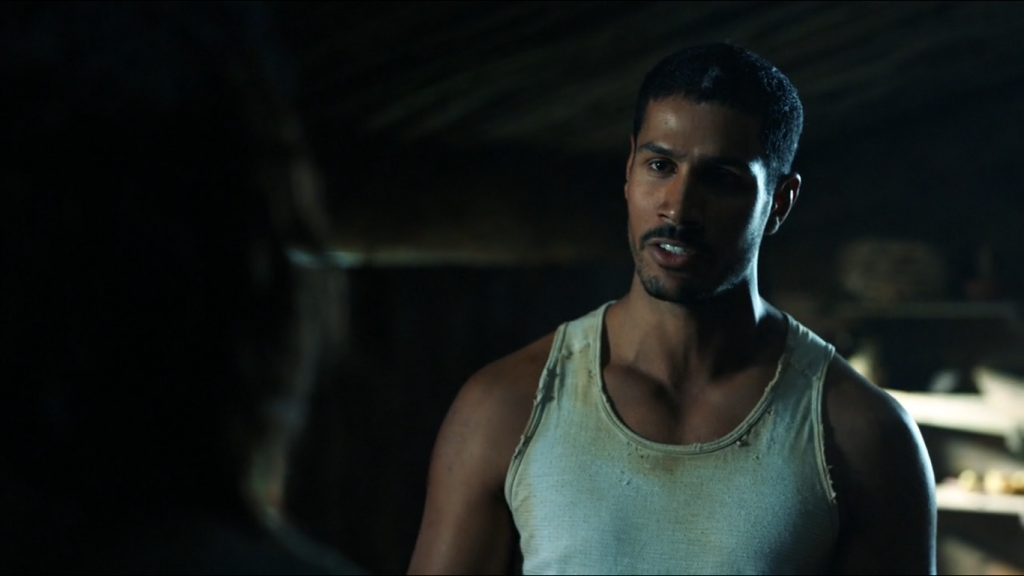 When Absolution Day comes, the plan goes well, until a betrayal happens.  Granted, you all should know by now that betrayals are frequent, so this is not surprising.  Before we get into that, the plan is to knock out the coming Disciples, take their uniforms, and hop into the Anomaly.

Then, the betrayal happens.  Orlando is tied up as bait, to distill a distraction for those uniformed guys.  The pan was to take Orlando with the group, but Echo has fallen back and decides to leave him.  Her reasoning may have been logical as she would do anything to save Bellamy and her people.  She does not know much about Orlando, and fears that he may betray the three by revealing everything to his people.  It is a harsh and hurting take on Orlando, as I grew to like him.

In the midst of the plan, Echo saves Hope from getting killed.

The three crosses over, leaving their friend behind.  As a result, Orlando commits suicide because the loneliness is unbearable.

That is a very tragic ending to an innocent character.

Sanctum had a rather quick-paced narrative, but informative just the same.  Clarke and her small group of kru examine a dead Disciple, curious about who she is and where she came from.  It does not take long for Anders to tell her that they have her friends but also shares that they have been on a killing spree.  With that, Clarke without hesitation decides to save them.  Yet, how exactly does she know who needs to be saved without Anders or the other Disciples revealing names?  Perhaps it was because Bellamy, Echo, and Octavia are the only ones missing from Sanctum.  Other than that theory, there nothing else to go on. 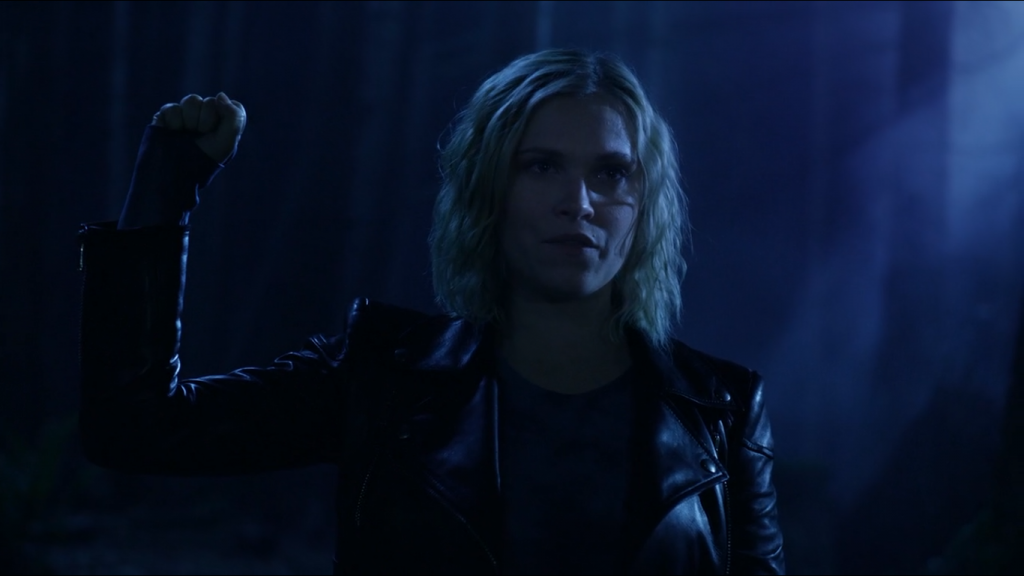 Anders tries to manipulate Clarke, but the truth is that he wants her as prisoner.  Clarke pretty much knows everything that could “help” them use her knowledge to their advantage.

What do they want to do with her?  I have so many thoughts and theories coursing through my brain, but the one that sticks out is torturing her.

I just made myself sick.

Raven is feeling the guilt and ramifications of killing Hatch, despite Jordan reassuring her.  She sees Hatch’s face when she takes off the helmet as if it is proving her statement of “keep seeing their faces.” 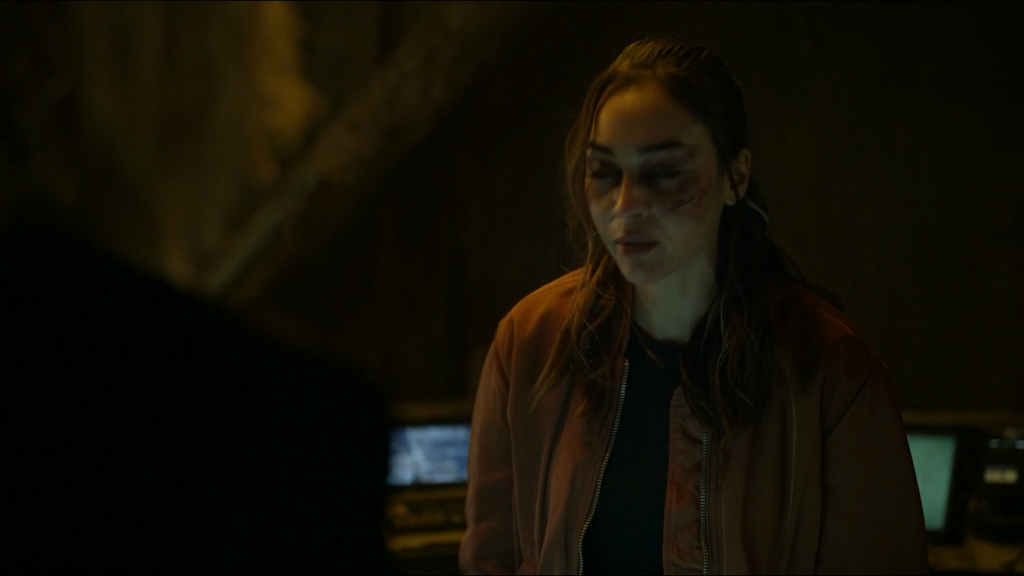 She regains her composure, getting right back into gear.  She analyzes the mysterious helmet and thanks to Jordan’s “think” comment, she discovers a whole new universe inside the helmet.  Thought control is its power source; sharp intelligence charges it up.

She also sees the multiple planets and the Anomaly that connects them all.  The Anomaly-as Raven describes it, is a “wormhole”- allowing intergalactic travel.

Clarke later meets Anders and his clan at the shield with her own kru scattered behind her, getting ready to shoot at their new enemies.

Little do they know though is that the Disciples used their “ghost mode” technology on them.  It feels like the end for them, but at the precise second, Jordan and Raven arrive.  Raven kills them all as she is far smarter than they are.  The only downside to this is that her kill count just heightened. 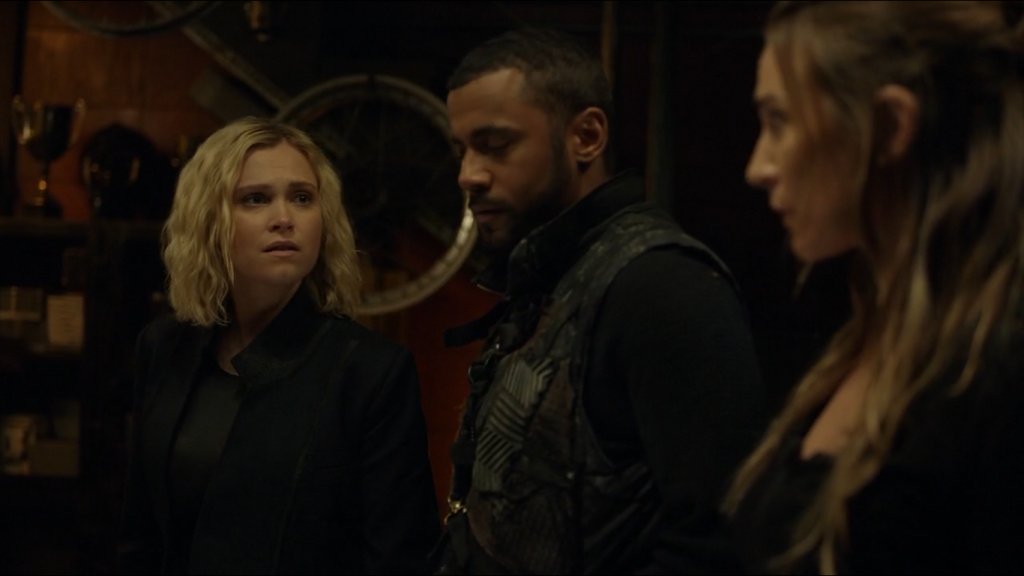 Mesmerized by the Anomaly, the rotating planets, and structured by saving their friends, Clarke, Raven, Niylah, Jordan, and Miller all step into the Anomaly.  Not based on any scientific or survival logic, Raven selects a random planet because it “seems fun.”

This was a poor choice on her part-as they know zilch about these planets, so how does anyone know if they are inhabitable?  Or hold dangerous trekking?  You cannot pick a place to explore just because it appears fun.  You must have knowledge and observations on them.  Otherwise, you are headed to a world of despair. 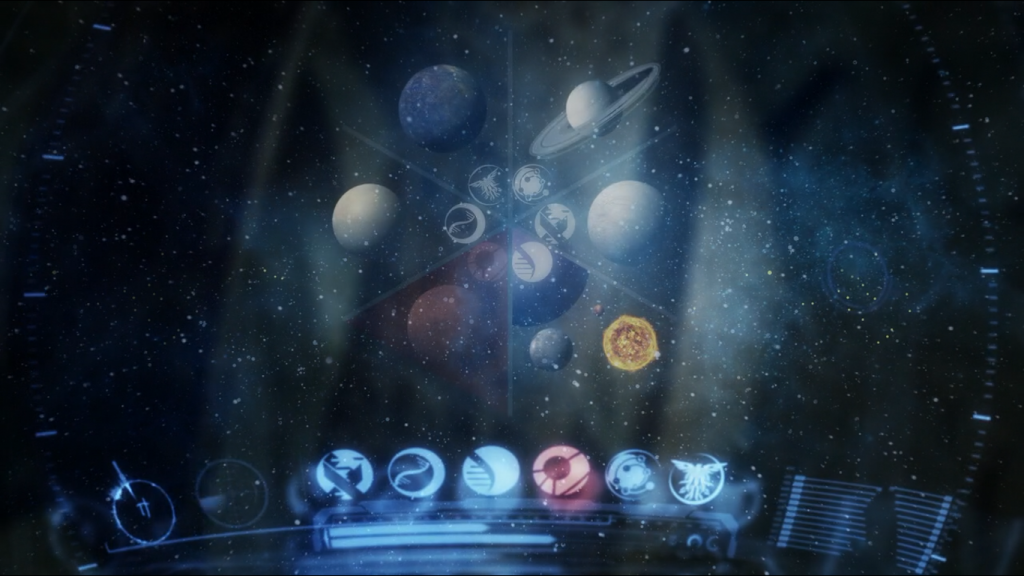 Gaia opted to stay behind to watch over Madi and Clarke is immensely grateful for that. But she does stay behind too long as a Disciple slips through, which causes Gaia to go into self-defense.  Unfortunately, she is knocked out, then dragged into the wormhole.

Can we just have a happy moment here?  Is that too much to ask for?

Anyways, Nakara, or the Ice Planet-was the lucky one that was chosen.  It is a cold and dreadful looking place, but appearances can be deceiving. 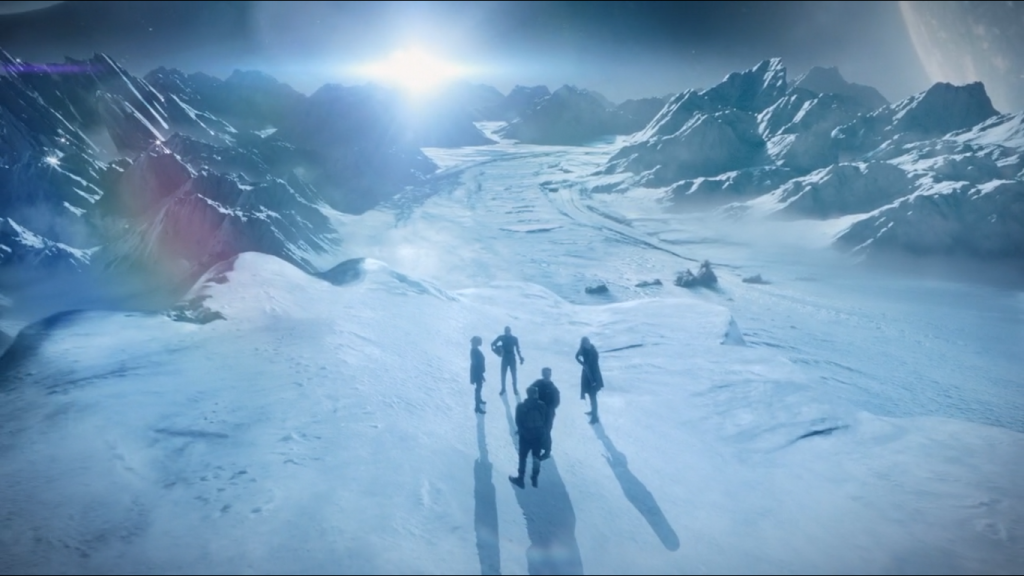 With no Anomaly Stone, the group has no way to get off.  See what picking a planet based on fun and not logic can get you?

With Raven’s scientific skills, she might think of an alternative to planet-jump, so there is hope that their mission will be back on track.

Or they become frozen in time.

What did you like about Hesperides?  Do you think that Bellamy is still on Bardo or was he transferred elsewhere?  How do you feel about Clarke and her kru being stuck on Nakara?  Based on Raven’s logic what planet would you head to?  Do you think that the offline planet is Earth? 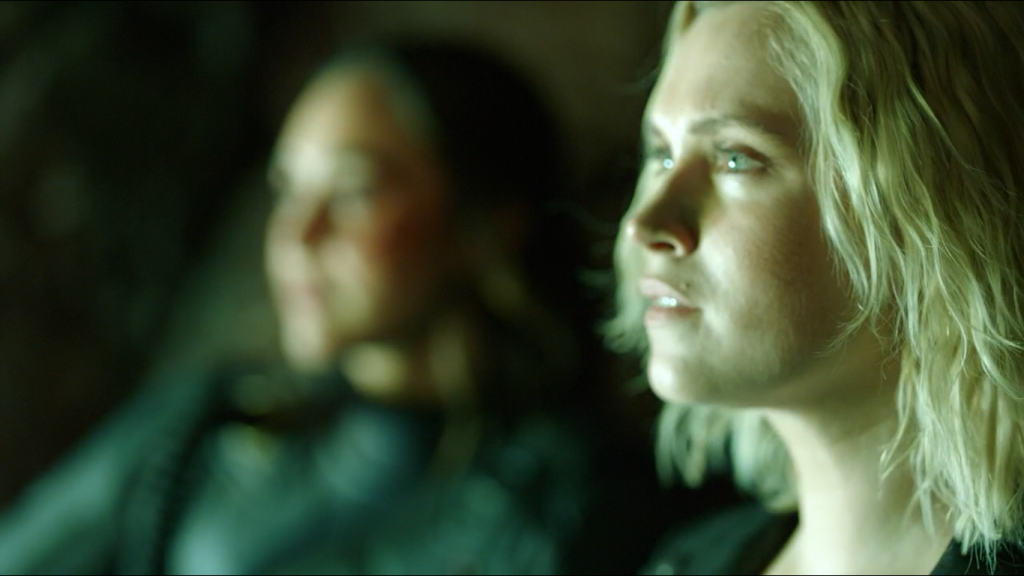 Share your thoughts in the comments section and check back for more!

The 100 airs Wednesdays on the CW

The 100 Welcome To Bardo Promo & Stills