The 100 False Gods was an intense chapter in season 7.  Moral compasses spun uncontrollably as Raven enters the gray area and letting go of important personal effects was difficult.  See the review for False Gods and share your thoughts!

*Note:  We are well aware and active in the racism events that are present.  It is a horrifying, yet critical time in history and we must erase its existence.  We stand by with the Black Lives Matter movement.  Any form of humane injustices will not be tolerated.*

In this week’s thrilling and dark episode, False Gods offered the breaking of certain faiths and loyalties while trying to keep peaceful boundaries.  However, while the attempt is good-hearted, it often ends up in a negative and sinister light.

With everything that had happened in From the Ashes, you would think things could not get any worse.  But they have in true The 100 fashion.  In fact, things got way off the radar fast.

In last week’s episode, The Garden, the focus was spotlighted on Octavia, her transition of becoming an “aunt”, and her ongoing pursuit of finding Bellamy.  False Gods segued the narrative on Sanctum and its citizens.  The story moral is doing what is right vs. what is an acceptable loss-both in the humane sense and ideologically.  Clarke had the challenging notion of whether sentencing Russell in her explosive grief was virtuous, after her cool down.  Especially when she made a promise to her mom after burying her wedding band.  Not fulfilling such a promise after saying your good-byes could only mean deceit and breaking a part of the soul. 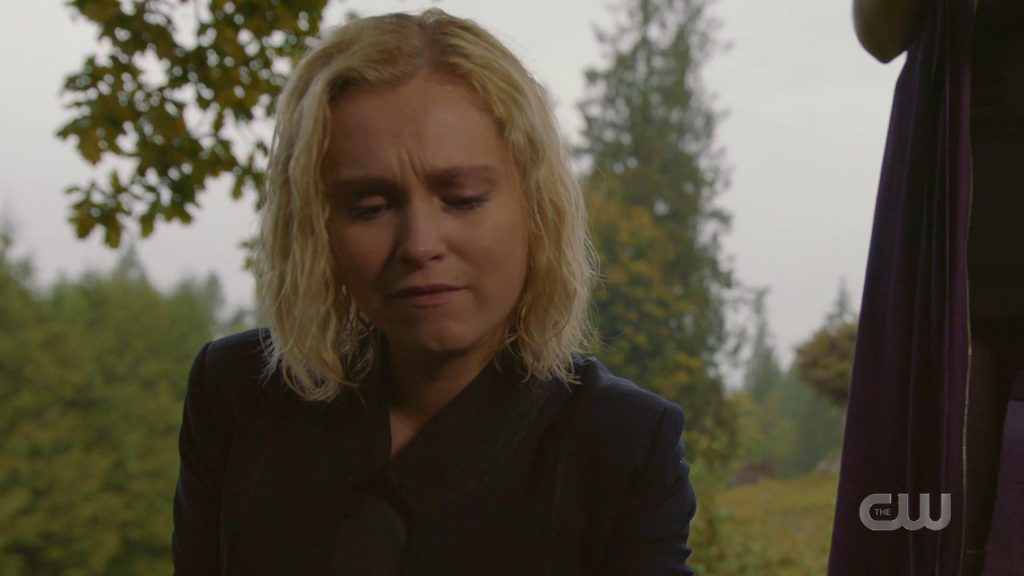 While many believe that Russell’s execution is justifiable as he murdered an infinite amount of people (including Abby and nearly Clarke), Clarke wants to follow a more angelic moral compass.  All that Skaikru and herself has known is violence, and it has become the inevitable and solution to all circumstances.

Yet, the change is not without its barriers.  Jordan questions Clarke’s decision, bringing up his father and his call to “do better.” I have to say that Jordan’s point of view is reflective of his parents as he wants to live up to their legacy.  While that is honorable, it is going to cause traction within the others.

But, maybe his bit of peaceful hopes will be enough to change.

Clarke gives Russell the opportunity to announce his fate to the people, and it has a complicated reaction.  There are loyal citizens willing to die with him as they are sorely devoted to him and his fellowship.  Rest assured, that Russell (Shiedheda) accepts his fate, but wants no revenge or hostility. 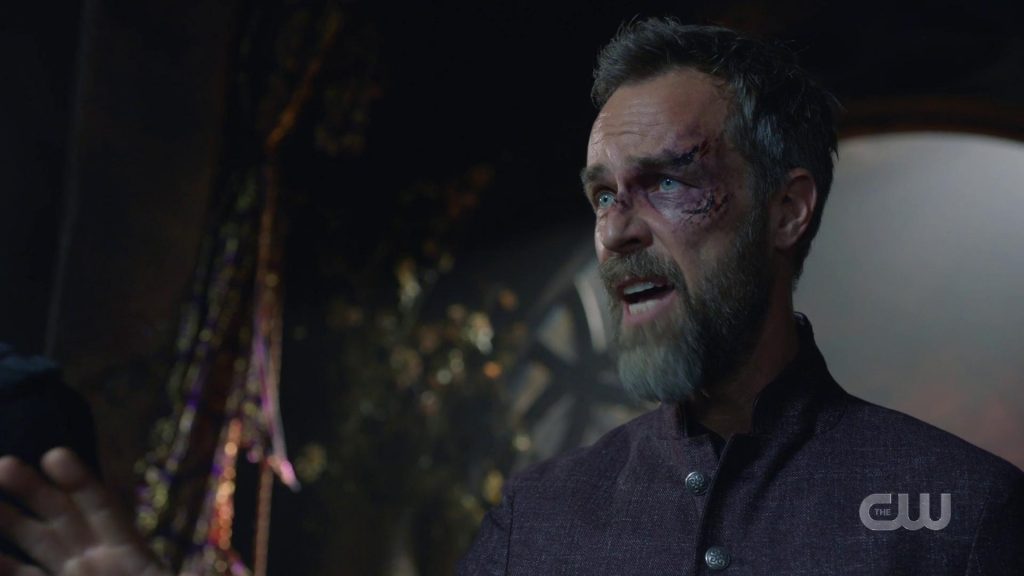 However, Russell’s execution has been postponed due to being shot (he will live, thanks to Jackson) and if anything, this will almost grant him a second chance.  I say “almost” because once Sheidheda is revealed, there is no way that they will allow him to live.  I can guarantee you that.

At least he got a cookie out of it.

In From the Ashes Gaia has lost her faith-something that she greatly identified with.  She is now faced with the hard situation of telling Wonkru that there is no more Commander to follow.  Madi has been freed of the Flame, freed of Sheidheda, and free to be a little girl.

After her reveal, Gaia gets the boot from Wonkru-just like Indra said she would.  Now, Gaia has not only lost her faith, but her people too.

Towards the end, we got a calming scene where Clarke and Gaia share a discussion about faith and virtues.  I found Clarke’s message, “I can’t lose anyone else” foreshadowing because soon enough, she’ll find out about the Anomaly and from there, we can presume that she won’t go down without a fight to save her friends.

That is who Clarke Griffin is though.

Russell’s execution is not the only conflict Sanctum has.  As discovered by James and his girlfriend at the beginning, there is a radiation leak, caused by a faulty tower.  If not corrected, then the entire community can have a nuclear meltdown-killing all.

It is up to Raven, Emori, Murphy, and Eligius prisoner Hatch to save the day.  Raven is at the control panels while Emori is inside the tower making the necessary and crucial modifications.  Murphy is right outside, an underlying panic enveloping within as he watches his soulmate complete the mission.  Emori does it with grace, knowledge, and precision, and without hesitation. 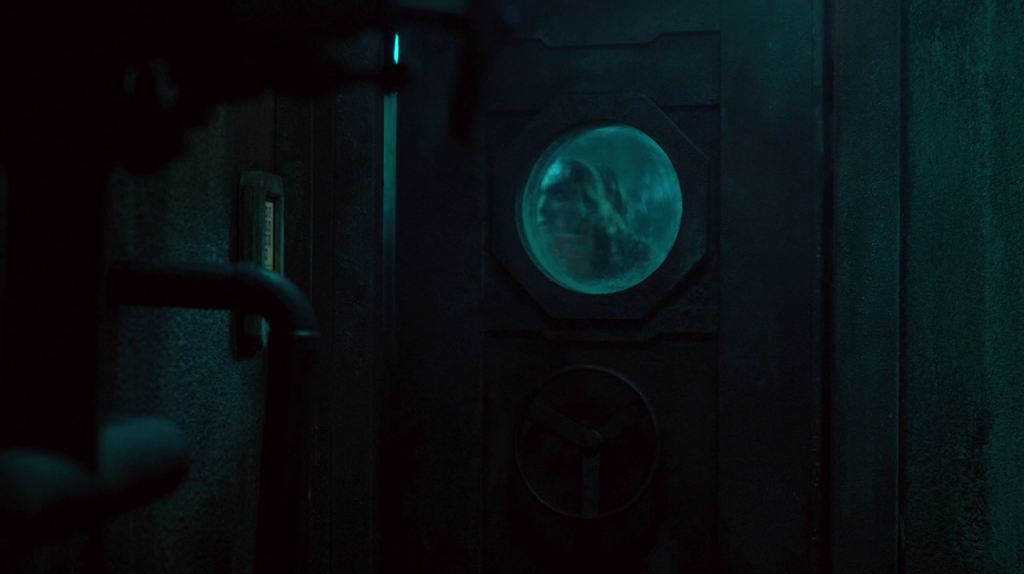 The towers do not help with the leak because the issue also lies with the pipeline.  With the promise of unlimited Jo Juice, Raven recruits Hatch and a few others to help with the job.  His wife, Nikki is highly suspicious as she has great reason to be as this is a dangerous job, but she allows it.  I am a bit puzzled by that because she knew it was high-risked, but maybe she just wanted to see Hutch happy.

As the temperature rises (1500° F for meltdown), Hutch and Murphy worked against the clock.  While they do, Hutch speaks of his criminal past.  Like Nikki, he was a bank robber that killed many.  He partnered with her doing the excursions and was eventually sent to Eligius. 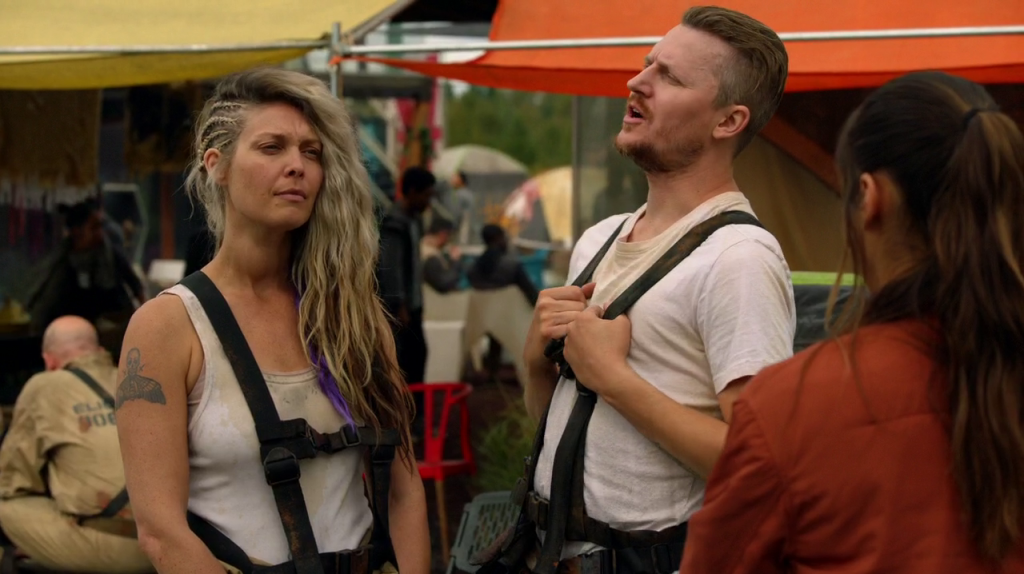 Hatch may have killed, but he was given a second chance by saving many lives.  He was not by any means a saint, but he just wanted to be better.   I will give him that.

As soon as Sanctum is saved, Hatch drops from the radiation poisoning.  Murphy is right beside him in his last moments and he is broken up.  It is a noteworthy arc in his character as Murphy has not been known to display any grief, but something inside of him changed; he has learned that life has immense value, and his heart opened up to love.  Those initiatives can change someone’s perspective.

Raven on the other hand is reeling into her breaking point as she was responsible for Hatch.  His death represented her downfall into the darkness.  However, she knew that this mission was hazardous, and she knew the risks involved.  In my opinion-and, it hurts me to say this-that she saw Hatch as a disposable and his life was meaningless because of his criminal past. 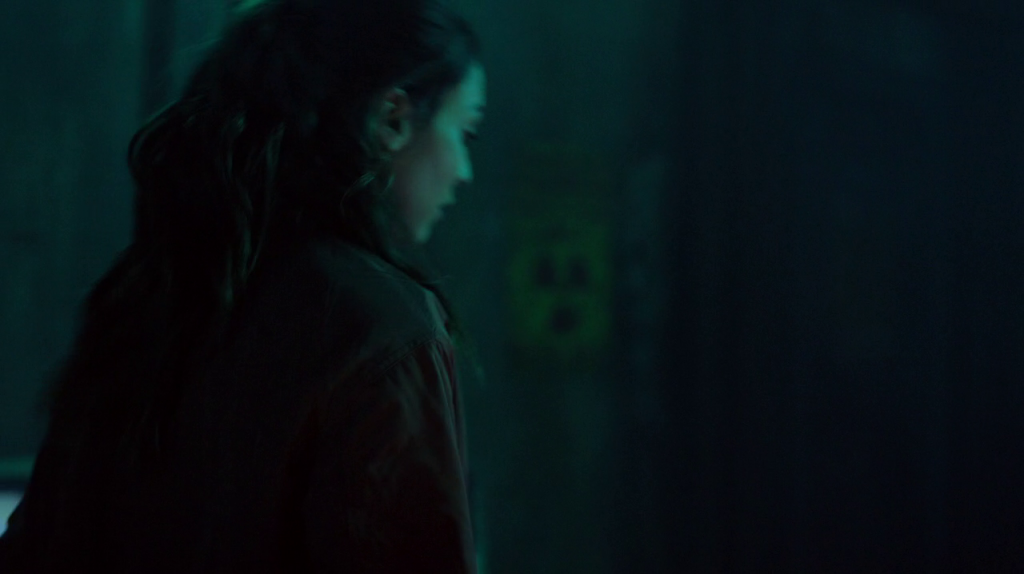 It is worth pointing out that The 100 all started out as criminals who paved their way into becoming well-rounded individuals.  They were all once viewed as disposable but proven otherwise.  Raven was not a member of The 100, so perhaps her subjective mentality played a part.

Or that her “too close” * past has caught with her and once faced with it; she is in disbelief.

Nikki comes in, discovers her husband dead, and takes a hard pummel on Raven.  She is torn, upset, and filled with rage.  It takes a few guys to pull her off, but it is apparent that her focus will be on Raven.

This will haunt Raven for the rest of her life; there is no turning back. 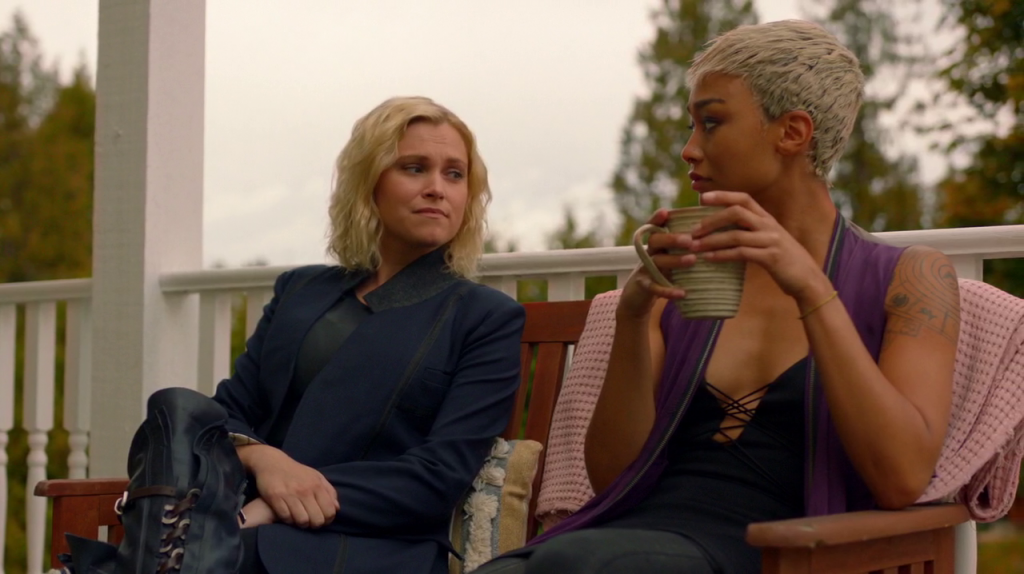 Did you enjoy the episode?  What did you think of Raven’s choice?  How do you think Clarke will react when she finds out about the missing?

The 100 Hesperides Promo and Stills