Faith and determination to survive were all very much present in The 100 Etherea.   We got a whole hour of simply Bellamy Blake and his trails in the mountains.  The episode put The 100 back in its rightful place and I now have hope for the remaining episodes.  Read the review for Etherea and join the climb!

In Etherea, Bellamy Blake arrives back to The 100 and it feels so good.  The show has been lost without him, but that is not to discredit the other characters of whom placed their all.  But there is something special about Bellamy:  his perseverance, his loyalty, and his determination.  In just one episode, he brings The 100 back to its survival and moral roots and just like that, the show has aligned itself back on track.

Not that it was completely off, but the show train was swaying.

Written by Jeff Vlaming and directed by April Winney, Etherea explored the physical metaphor of self-discovery and the will.  Even in the darkest, most complicated times, there is always that light at the end of the tunnel-or in this case, the mountain top.

Bellamy Blake, welcome to Etherea.  We hope that you will enjoy our delicate cuisine of scorpions and lichen, fighting in unknown territory, and exploring the mountains.  This is an ultimate test of survival and self-worth and to pass, you must dig deep within yourself to find what is most important and to fight for it.

We hope that you will enjoy your stay.

You have no idea just how happy I am to see Bellamy back.  It has been a hot minute, but it was all worthwhile.  This is the Bellamy that I love-the leader and motivator, along with caring for those who need it, even if they are not favorable.

For the most part. 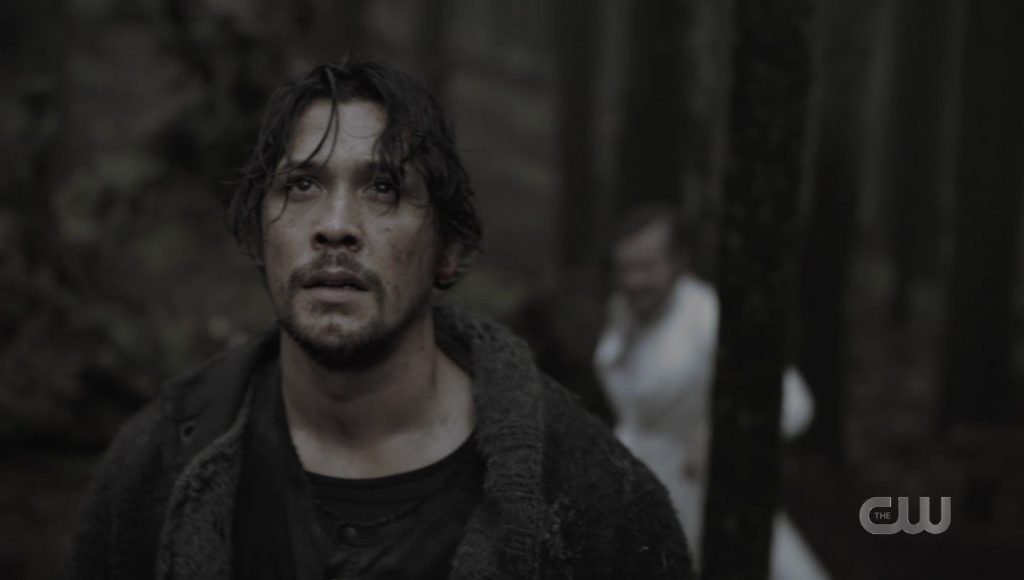 For months, Bellamy, and Conductor Doucette are stuck on the planet Etherea.  Back in Welcome To Bardo, both men were blasted into the Anomaly and unbeknownst to Octavia, Echo, Clarke, and the rest, he is alive, not dead.

Like, you cannot get rid of Bellamy that easily.  The man is here to stay (until the very end).

The sole purpose of going to Etherea is to seek out ascendance and transcendence, which proven to be true for Cadogan.  But what about Bellamy?

On this cold planet, its landscape-beautiful, but presents lethal elements, Bellamy and Doucette must work together.  Although the two had a rocky start (Doucette preying upon Bellamy; Bellamy fighting back), both men found mutual ground.  Doucette is one of more “Shepherd be praised” peeps while Bellamy believes that his family and friends are worth going back for.

I must confess, Doucette’s ramblings of the Shepherd annoyed at first, but as we shift further in, he held some relevance in his beliefs.  The Shepherd by no means is God, but you must have faith to reach the peak.  The differences between God and the Shepherd is that God represents loving your closest ones, and of course, all mankind, while the Shepherd reflects no selfish love to your closest but united.  For all mankind. 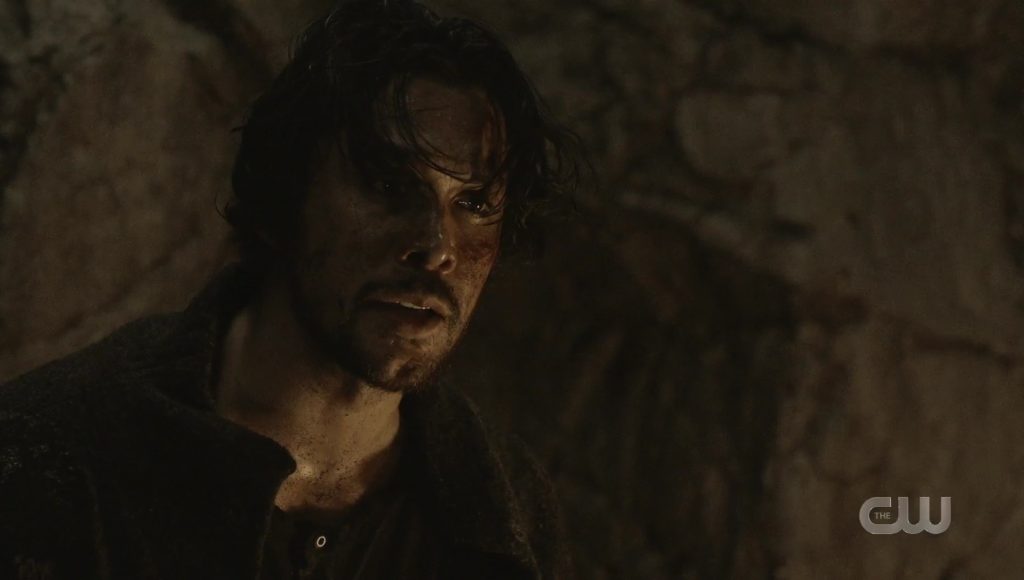 To pass time as Doucette’s leg heals, Bellamy reads through the Shepherd’s Passage-their version of the Holy Bible.  To him, it is a text of total ludicrous BS and he makes no hesitation to share his view on it.

Through vigorous mountain climbing, eating scorpions, sub-zero temperatures, and a glowing presence that transitioned into a beautiful, heart-warming reunion with his mother, Aurora, the brainwashing eats itself in his mindset.  It is a sad, but careening arc of Bellamy’s character, but this happened once before back in season three when he fell under Pike’s guidance.

Yet after he has done that horrid thing, Bellamy knew he was in the wrong and regretted his choices, but those choices will forever be entombed.  Although he cannot go back and reverse his actions, he can learn from his mistakes and do better.  That is how we become more empathetic and human.

I hope that is such the case this time around, otherwise deep s—t will fly.

As the months’ rage on, Bellamy and Doucette form a bromance, confiding in each other inside the caves, testing confidence, even as going as far to trust one another (and wearing matching furs), and Bellamy risking his life to save Doucette from a potential mountain fall.   I was not sure is pairing Bellamy up with a fanatic was a great move at first, but it turned out to be quite the story structure.

They balance each other out, as both are opposites, but each has something to go back to.  Their own version of value holds significant importance and worth, and that is enough if you want to live to see the next day. 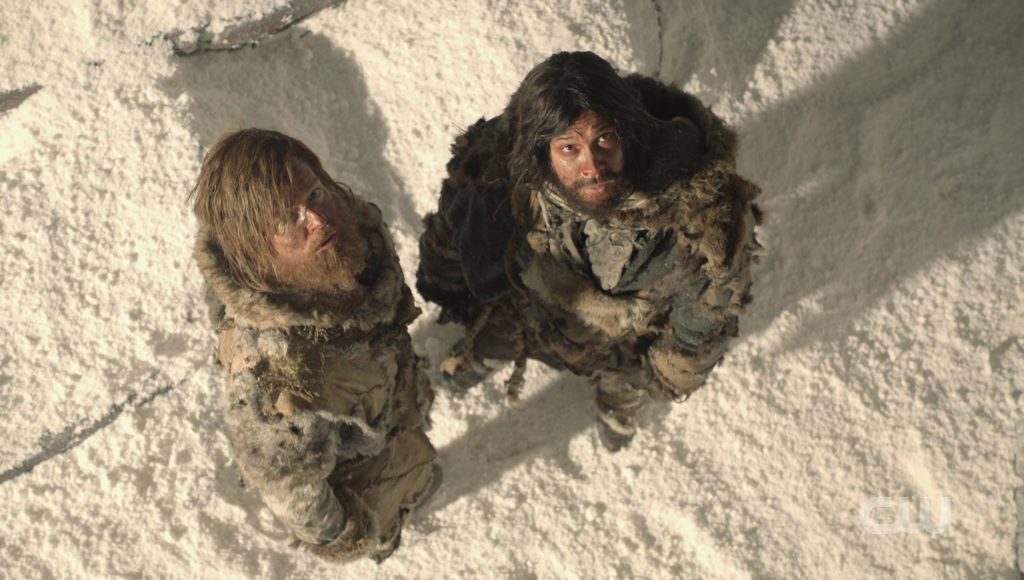 The enlightenment journey only becomes stronger for both but ends in blackness for one of them.

With determination and faith, Bellamy and Doucette make it to the mountain top, and to the Anomaly.  Yet, the portal to Bardo descends its way down-which becomes another test for Bellamy’s faith.  Doucette takes the ultimate plunge, reciting the Shepherd’s chant.  It is concrete proof of religious faux dogma and Bellamy is in utter disbelief that he would go that far.

Why kill yourself when you have come so far, and you have found something to live for?  Even if it does not align with others’ beliefs?

Now Bellamy must take the risk of either waiting for inevitable death or falling into the wormhole.  Well, Bellamy does not want to die, so he takes the leap of faith, along with his newfound “glory”.

From the highest peak to the deepest fall, Bellamy Blake has not surpassed them all.

Bellamy’s pilgrimage on Etherea was indeed a test of his own self-discovery and from it, he has become a believer and a faithful follower.  I want to wish that he was playing it all along, to fool Doucette and the Shepherd just so he can back to his people, but knowing that he has been brainwashed before, he allowed himself to become grossly entrapped.

It is one thing to be devout to your religion (I consider myself semi-devout to Catholicism, from my mother) and that is fine, we all want to believe that there is something better for us when we leave this earth and to have a system of hope and peace that we believe in, but if that belief entails harming and crucifying others, than that is when it becomes problematic and an ingredient of evil.

Inside the Golden Cave earlier, Bellamy was greeted by Cadogan who brought him to his mother, Aurora.  Her spirit brings tears to his eyes as he allows her to embrace.  I believe that was his turning point to fully allow himself to become devoted to the Shepherd and his Cause.  (That is full-on manipulation right there.) 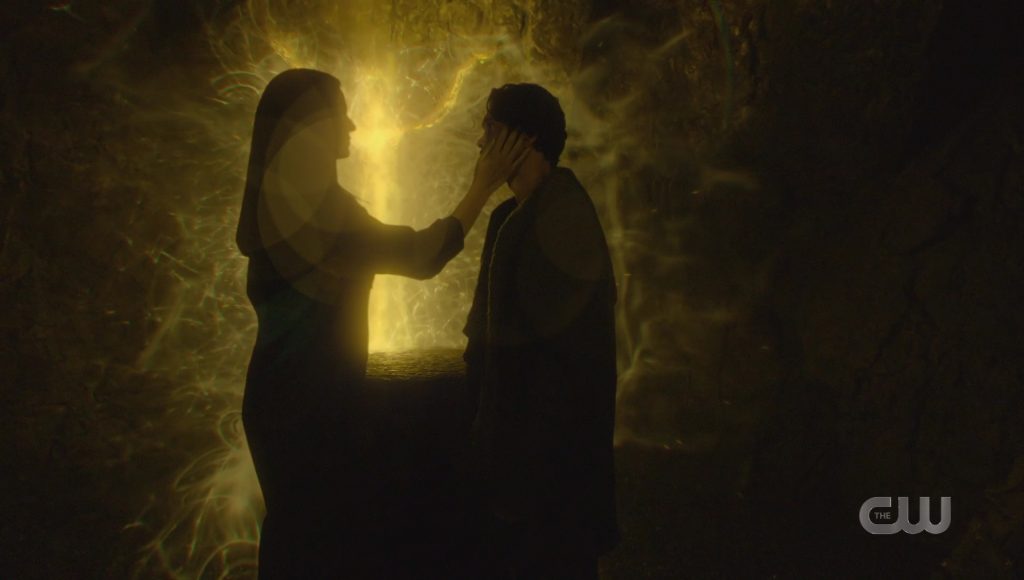 Once more, Bellamy was greeted by Cadogan and this time, in Bardo.  He is proud of Bellamy and his achievements in Etherea; he is now one of them.

And Bellamy takes it to full head and heart.   With a kneeled bow.

Here comes the devasting betrayal, guys and it is just going to break your wee hearts.

Cadogan reunites Bellamy with his friends and the three women he loves inside a dining hall.  At first, they are all in shock because this was the man of whom they thought was dead.  Just imagine their relief replacing the shock in just a few seconds.

“Nothing can break the Blakes,” Octavia chimes.

As much as Echo and Octavia wanted to hug him, and attempted to, you can not touch a high Disciple.  And Cadogan and his Disciples made complete sure of that.  It had to hurt for both.

As Clarke has the Key, she is the only one that can hug and touch him.  I love Bellarke hugs as they are some of the best hugs in the world, but this felt way off to me.  Clarke’s initial joy and love were there, but Bellamy expressed a cold and empty hollowness to it.

And the latter rang true. 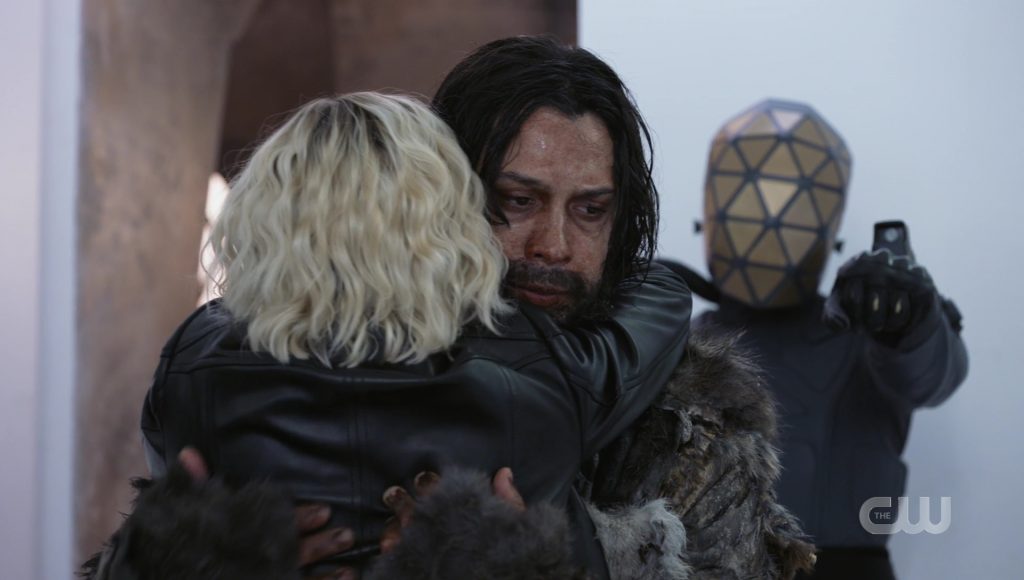 After the hug, Bellamy spilled the tea that Clarke does not have the Key; they destroyed the Flame and she is of no use for Cadogan.  Clarke only used Cadogan’s belief so that she and her friends can survive, and it worked.  God, did it work.

Bellamy’s betrayal came like a stab in the heart. Here was the man that she loved and thought she knew for centuries and he turns on her, just like that.

One of the greatest pains in the universe is when someone that you love betrays you.  Clarke’s own heart shattered when the truth was revealed and now her own life is in jeopardy.

As well as the others.

What will happen now?

The 100 The Stranger Promo and Stills