Are you ready for the ultimate fanatical ride?  The 100 season 6 trailer is finally here!  The heroes and new crew are on a hypnotic, psychedelic, and ‘demonizing’ journey to live and try to be the good guys on the new planet with the two suns.  If you believed that there will be peace and love this season,  well, you are not wrong, but you are not right either.  It’s a bizarre and tantalizing potion to sip, but once it sinks into your system, you can’t get enough.  Continue on to read the analysis and in-depth summary of this topsy-turvy trailer.

The day before, we were presented with the music festival inspired poster for season 6.  Its bright coloring, Clarke clones, and the down view of Sanctum were far off from the previous posters which featured the characters and the seasons’ storyline.  It’s definitely something out of this world for sure, and each time that I survey it, 60’s anti-war music plays in my head.  And I am not even that old to live through that era.

Well, enough of this rattling on, let’s take a look at this trailer.  Followed by more of my prattles and speculations!

“Be The Good Guys”

Monty had hope and the driving vision that his family would thrive and take the chance of becoming the “good guys” on the new planet.  He sacrificed his opportunity to be placed in cryo, had a baby with Harper, and spent 30 years cracking the Eligius III code.  What it was, was another habitual planet, far away from the now destroyed earth.  For Clarke and her gang, it will be a new opportunity to start over, to make a harmonious change.

The introduction sequence was the perfect route to honor Monty’s legacy, projecting a seemingly beautiful fresh start for all.  The scenic landscapes are breathtaking, a warm invite into the New World.  Clarke and crew are taking everything in, obviously mesmerized by their new home.  Yet, it was just a harsh hallucination of what is really to come.  Oh, the perfect illusion of the delusion! 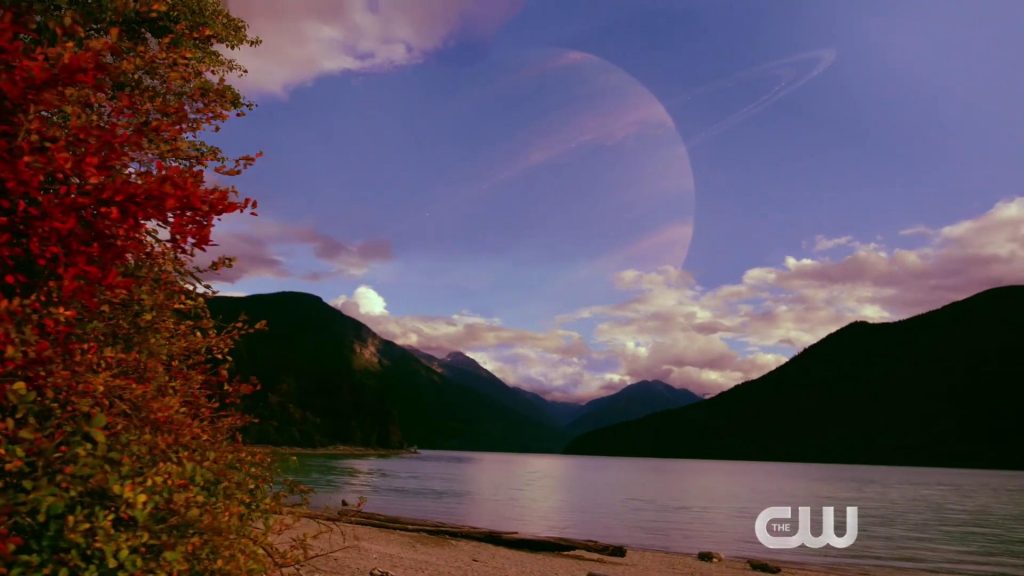 Or in a better definition: A Savage Garden where things appear like a serene paradise but hold a much more ominous truth.

For now, Kane is alive and well (cryo has done wonders) and is looking forward to spending time with Abby on the planet.  This may be their last loving embrace as Kane’s life is still on the cusp, and there are no further scenes with the two of them together in the trailer.  But that doesn’t amount to anything, right?

Also, there are plenty of couples being really cute with one another, and that is refreshing because rare moments of happiness exist.  Raven is happy with Zeke; Miller with Jackson; Jordan with a mystery girl, and there is another mystery couple.

Other happy moments:  Lola running to hug her mom, a flock of children racing up the stairs, a smiling President Russell.  The trailer makes a lovely debut to JR Bourne’s peaceful leader character, who tries to rule things peaceably.

Err, I have huge, major doubts about this guy.  But I am also excited to get introduced to him properly. 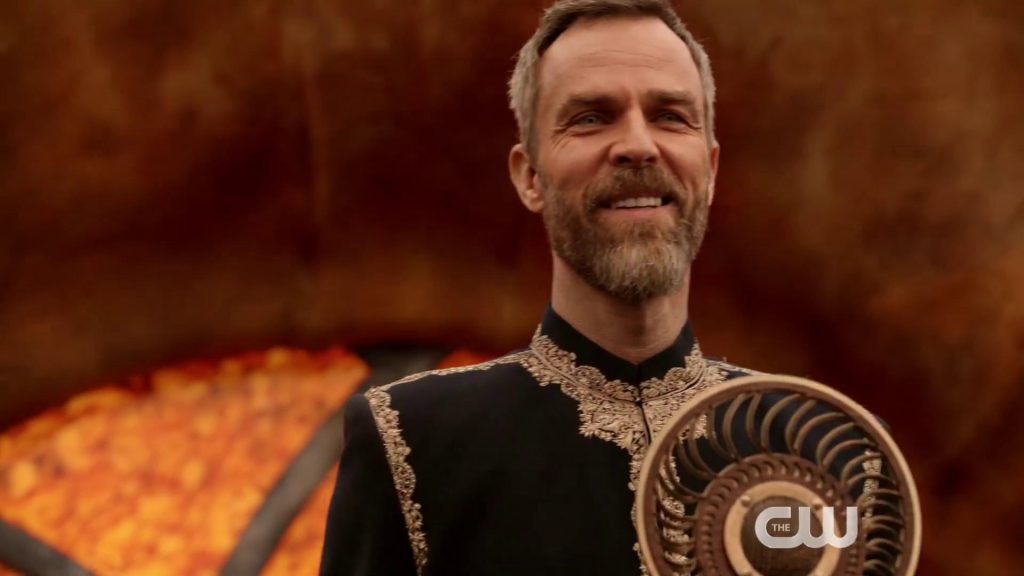 As we navigate and explore deeper into this manically intense trailer, the happiness, and amity ideals quickly dissipate as the darkness unveils.  Bellamy is apparently exiled from whatever “Sanctum” is, walking away and glancing over his shoulder in defeat.  Or is Bellamy on a trek all his own, despite a few other travelers, and who is he leaving behind?

The discussion of the radio calls has surfaced, after a lengthy time of dismissal.  There is not much to go on with this as Clarke only apologizes for leaving him behind, making him feel like those calls meant zilch.  How does one feel when your supposed best friend has done the unthinkable to you?  I fear that Bellarke will only get worst (in the beginning) before the improvement as that call dialog lingers in the air.  But we shouldn’t be too concerned as they are interacting like they used to later on, and I truly missed that.  Why waste a great friendship and throw away its potential? 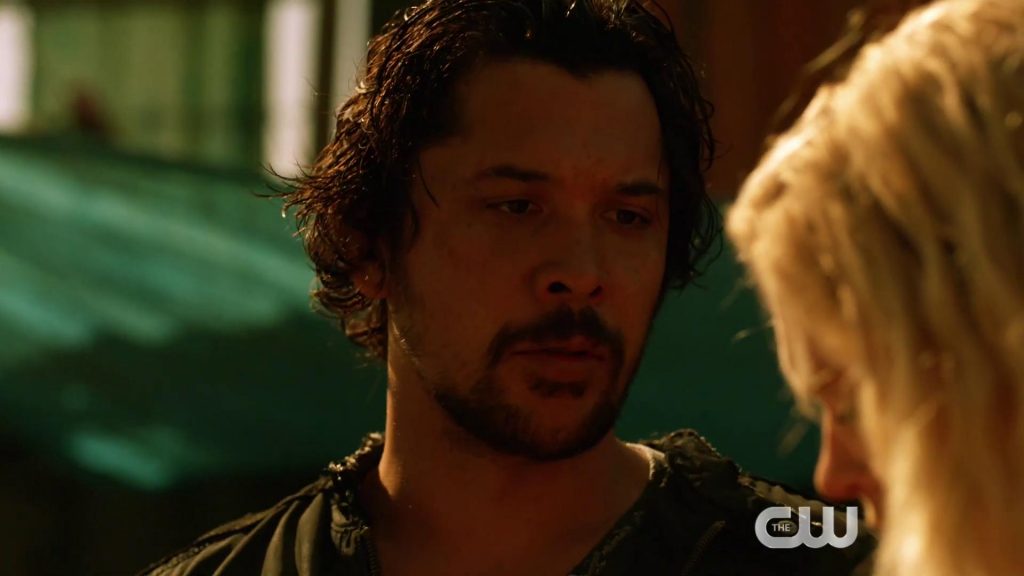 The Planet With The Rising Suns

This season’s tagline is “Face Your Demons”, that will lead a cryptic and menacing take on everyone.  When the two red suns eclipse, something transforms into the elements, unleashing everyone’s monsters.  Octavia is in her seasons 1-3 self in battle with her season 5 alter ego, Blodreina.  Whether this is a dream/hallucination, Octavia is facing her demons in the literal perspective, and clearly fighting Blodreina is one of her biggest demons.

That and sending her only sibling in the fighting pits to die, who, thankfully, made it out alive.

Clarke may have the biggest challenges of them all, haunted by her past decisions from last season, and perhaps even further.  We have seen her visit her Mt. Weather quarters, reflecting that if she could back to change everything, she will.  With this sequence, I am guessing that there will be lots of season two connections and parallels; the interesting part will be is how Clarke will handle them.  But Clarke is also having a good time as she is in a dress at a rave, and dancing around in pjs’s while she is painting.  So, apparently life on this new planet may not be all bad.

Digging further in, Emori is torturing Echo, who is chained and at her worst.  Is this part of her backstory that she may be or may not be flashing back to?  And who is that shadowy figure against the wall?  Is it Bellamy?  Will he be the one that will save Echo?  Or is he part of the deviation?  Or could it be someone else entirely?  If it is Bellamy, then I hope that he will rescue her because a good boyfriend simply wouldn’t allow that. 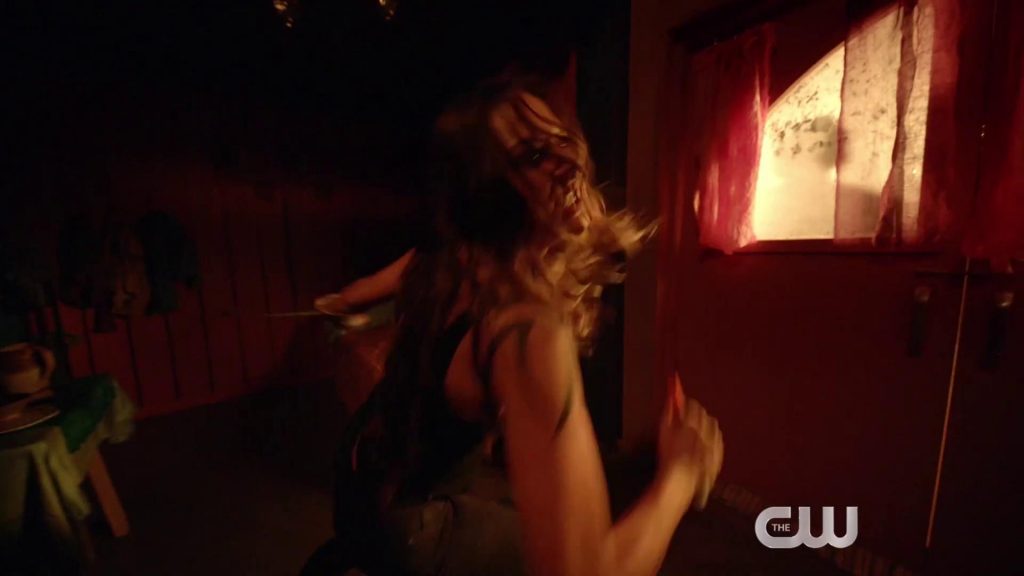 Then we have Jackson doing-not-so-kinky things to Miller, of whom will be on his own redemption journey.  Any animosity between Mackson makes my heart cry, I shout profanities at the screen, and my mind goes numb.

Murphy, Raven, and poor Madi are going through the “eclipse psychosis”, but I am afraid that it is Madi who is suffering the most.  She is haunted by a lone commander from her nightmares who enjoys taunting her.  Madi is also condemned to very cruel and unorthodox mental treatments.  Maybe as a cure to stop the demons, or to elongate them.   Whatever the circumstance, the appearance looks grim.

And I am sure that Clarke will have a shit fit when she finds out!

And Bellamy is assumingly the only one who isn’t fighting his.  But I am positive that he too, will stand against them.

As an homage to season one, there are “forest people” lurking about, hunting down our heroes in garb reflective in Grounder clothing.  Russell warns that they want to take over Sanctum, and burn down the planet like they did Earth.  Then, Octavia is chasing one of them, who stops her and her partner at gunpoint, giving them warning that if “you fight harder, you’ll die faster.”  Just who the hell does this dude think he is? 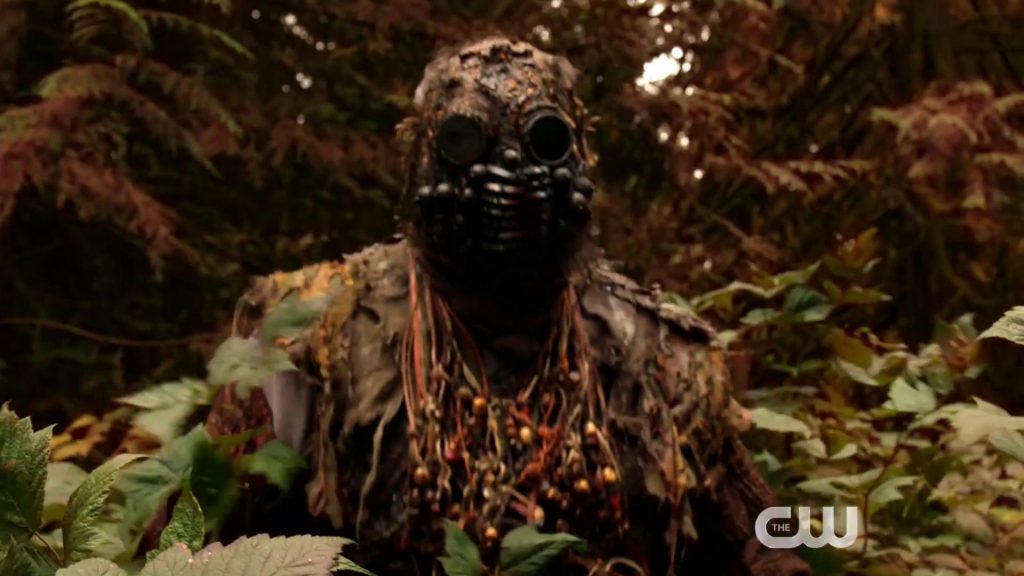 And we get all kinds of crazy scenery-such as a glowing green wave, an interstellar cosmic shower like the one in Frozen, and the visual art of Sanctum, which looks like a futuristic, medieval town.

Wake Up, Continue To Fight

Several of the characters are waking up from the 125-year nap, and once they get situated, they continue on fighting.  Octavia is fighting with Niylah, Raven and Clarke are quarreling, and Bellamy telling Octavia that his sister died a long time.  Along with the awakening, a still pregnant Diyoza kicking butt in a later scene, and Indra looking passive.  Whether they will venture to Sanctum is yet to be seen, but it’s awesome to have these fierce women back!

But will the vicious cycle of war and battle stop as Monty dreams of?  Or will they always be stuck with this lifestyle?  Not completely experiencing love and peace?  Will the crew be able to change?

As Russell told Clarke sympathetically and reasonably, “I believe you want to Clarke.  I just don’t believe you can.” 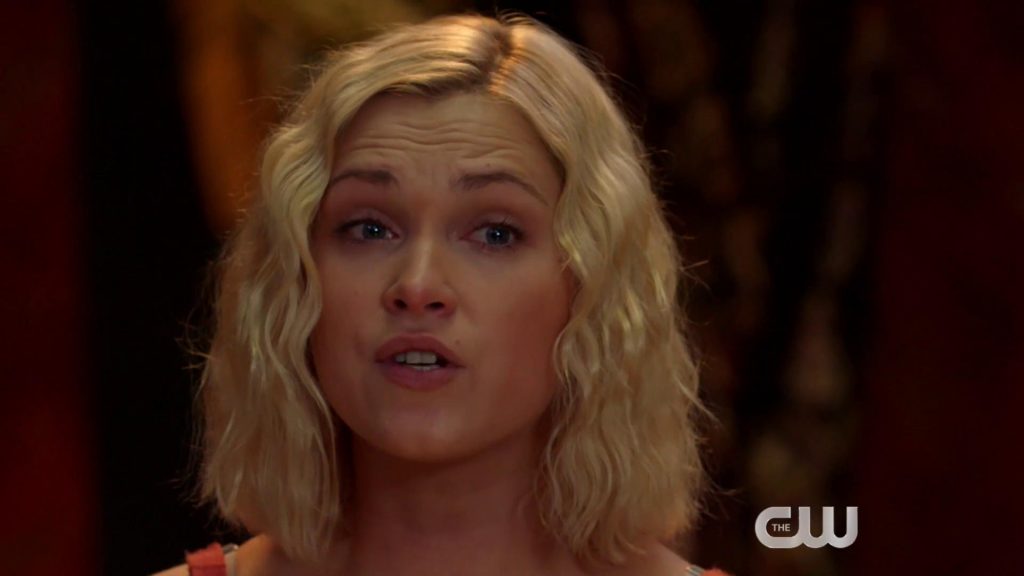 A recap in bullets: 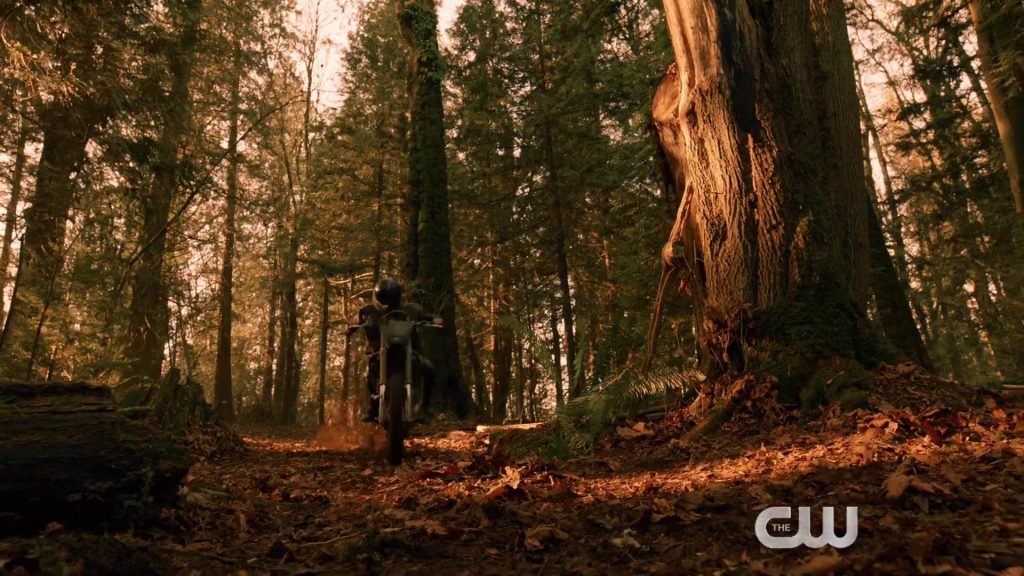 That sums up my analysis and observation on this compelling trailer!  Share your thoughts about it in the comments, or simply share!

Conageddon Jigs Back Into Boston