The 100 season 6 hiatus has certainly been quiet, with nothing to elaborate on or any stitch of promotion.  With the episodic stills released back in October at NYCC 2018, there has been nothing else to go on.  Thus, leaving us with a bucketful of questions that left us pondering.  I mean, a total black hole of nothing to go on.  Nothing to evaluate and theorize.  It was a pretty closed hiatus.

That definitely ended today, as the (colorful, folksy) season 6 poster has been officially released online.  Immediately, it caused a moment.  There are several pronounced features in the piece, that intrigued me, including the theatrics of bright colors and the hippy-esque, tripped-up impression.  Which is something that is completely foreign to The 100 as its predecessors displayed muted, softer colors, and all the gang facing the obvious. 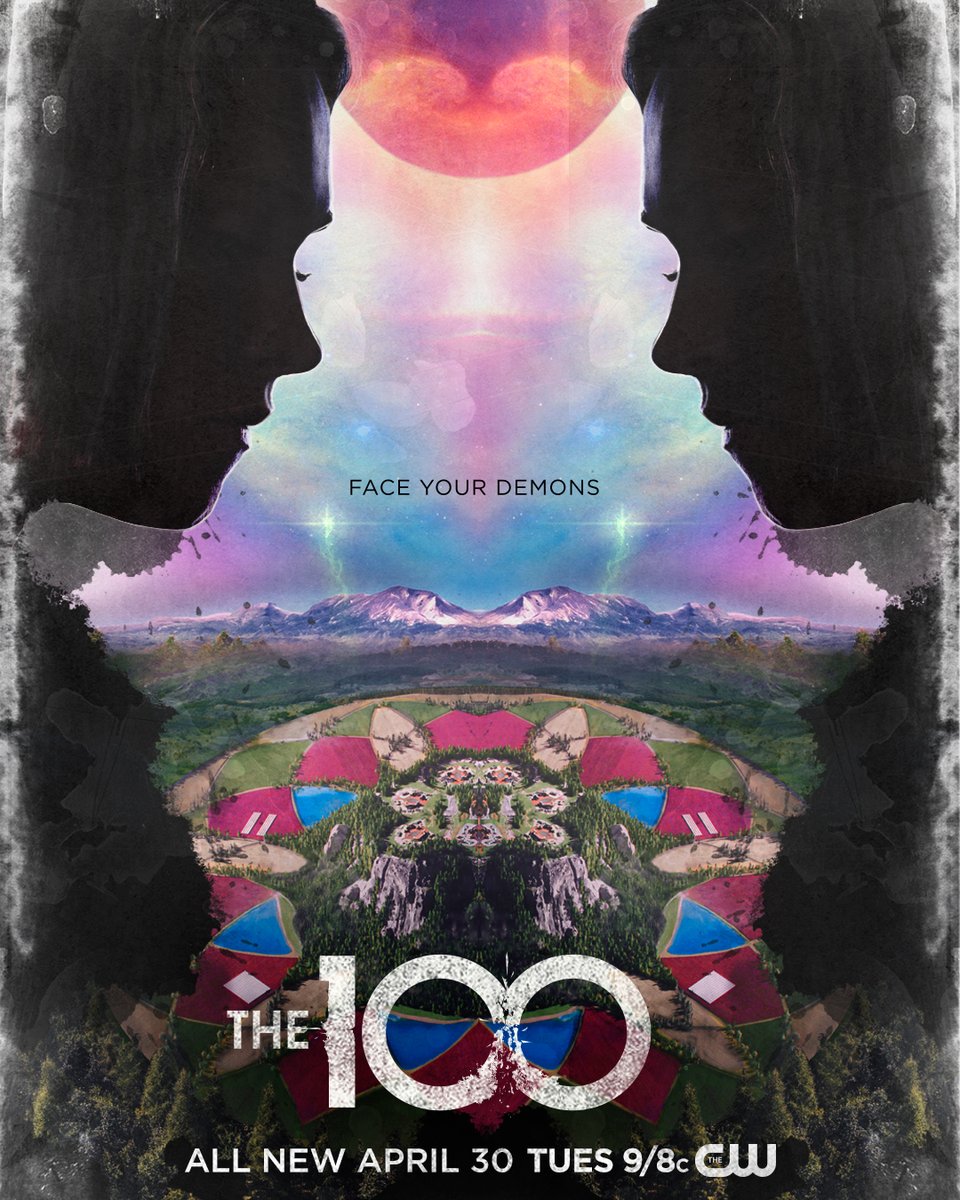 But now we have Clarke Griffin mirroring herself against a rather surreal backdrop, to those who are just looking in, may look harmless and seemingly at peace.  Yet, the truth can be so much darker, and so much eviler.  There is even the hauntingly line, “Face your demons” centered between the two Clarkes, signifying that she will face the repercussions of her past transgressions.  One such instance was leaving Bellamy behind in the Bunker, to meet his untimely demise.  Another, was shocking Madi as to stop her from becoming Commander.  Of course, there are others, but those two stuck out like two weeds amongst roses.

Will Clarke see the apparition of herself in “demon form”?  Will she have that inner voice trying to reason with her, yet also being condemned?  It is very plausibleasTaylor stated in interviews that Clarke will go through a healing journey.  Facing and connecting the demons is the first step towards recovery,

While I can’t make a clear confirmation of what the ‘craziness’ is in the center, I am getting that circus, fun house vibe.  Another element used to make things distorted than they actually are.

Another spectrum is the “many of faces” that I am currently focusing on, as I see a wolf as wolves symbolize order, pack loyalty, and strong and powerful survival instincts.  All of these things emulate Clarke and the other characters.  It may be a nod that there may be some semblance of animals on the new planet, a theory that I like as animals were sparse throughout the series, with an exception of horses.

Who wouldn’t want Octavia or Echo riding horseback against a two sun sunset in the new world?  I’d watch that indefinitely.

I also see a gremlin too, but since it may or may not be relatable, I will not dive into that perspective.

Colors, such as ones that stimulate calming aesthetics often represent a positive change.  And that may be the case for Clarke after she battles her demons and finds peace within herself and everyone else who might offer their forgiveness.

Or the pretty, poppy, (too sweet for my opaque tastes) colorization may be just a ruse to trip us up, and there is no positive outlook or hope.  Just a distraction or a dream-like hallucination to mask the darkness.  However, I might be allowing myself to get too ‘dark’, as my mind tends to go in that direction.  Yet, The 100 has always been dark with shafts of light, allowing the hope to never die.

Well, the questions and wonderment of this unique art will be laid to rest as The 100 cast and Jason Rothenberg will be at WonderCon this weekend.  Along with the screening of the first season 6 episode, there will be a Q&A session where the answers about the upcoming season will be sought.

It’s probably a good idea to stay off social media after the 31st, as there will be an en masse of spoilers.  But, if you want spoilers, then feel free to ignore my suggestion.

Next up will be the long-awaited trailer, which is scheduled to premiere in the last days of this week.  As we only have this very cohesive still from the trailer, we can only imagine just how intense the whole thing will be.

And how the hell did Madi grow in cryo?  I thought the science halted aging?  What’s up with that?

When the trailer DOES drop, look out for a full, head-on analysis and my over-emotional reactions.  Sure to be a fun read and ride.

What did you think of the poster?  Too bright?  Too confusing?  Not enough to navigate on?