The 100 How We Get To Peace Recap-Review

The 100 How We Get We Get To Peace was another stellar episode consumed with moral dilemmas, personal conflict, and choices that were necessary, but heartbreaking.  All-in-all, How We Get To Peace delivered excellent material with conclusions that will be time-stamped in our minds.  Here is the recap-review and as always, feel free to express your thoughts.

The 100 How We Get To Peace Recap-Review

The 100 How We Get To Peace was quite the piece of work, combusting with the handling of life or death, personal battles, and making choices that one would ever think of.  The 100 consistently preaches that there are neither ‘good’ or ‘bad’ guys leverage and the story in How We Get To Peace (extraordinarily written by Lauren Muir) has proven that once again.  It is not easy to keep with such a strong element, especially if the series has continuous actions and quickly averts one’s emotions on specific plot points.  Remarkably, The 100 plows the element in many fragments.

Battles In The Bunker

It’s no surprise that Octavia has full reign and control when it comes to the bunker and Wonkru.  It is also worth observing that she is towards the end of her power, and how that came about is just as I predicted in my season five preview.  I will get to that in a moment or so, but first, let’s ride through the situations before that event. 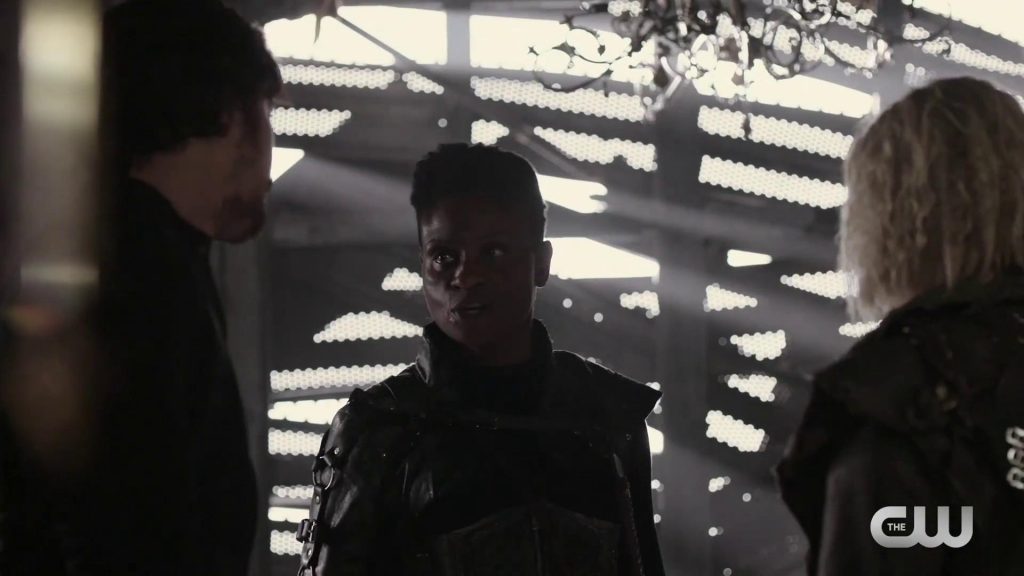 Clarke was “all killer, no filler” (Sum 41 reference) throughout, and I fully understand why she had to be this way; Madi has her heart, and nobody or nothing is going to rip her away.  There were times that Clarke expressed zero emotion in regards to those she thought that she could eradicate-including Octavia.  Her declare of taking her out in Acceptable Losses rubbed Bellamy the wrong way, and he has every right to because O is his sister, whom he loves, whom he raised, whom he shared his rations with, and that killing her is no acceptation.   He will always love her, no matter how mentally deranged she is.  It is one of the things why I love the Blake sibling relationship because no matter how misaligned or disagreeable they may be, they seem to see through the issues.

Granted, this season has been rather difficult for them as Octavia became the Red Queen, still had major infractions about his girlfriend, Echo, and is just overall damning.  Bellamy had his share of transgressions in the past, but he redeemed himself by doing the things that make his leadership valuable.  Octavia, on the other hand, has allowed her anger to go beyond any border of control, and allowing it to unlock in unspeakable measures, including the executions of her own people. 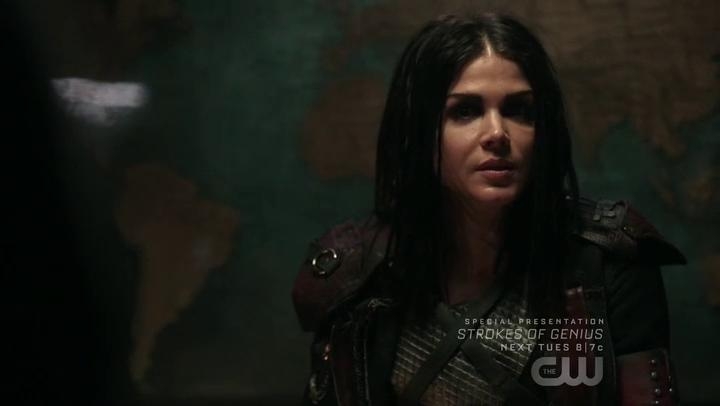 However, there is no character on The 100 who have not murder someone for the sake of survival.  It’s biased to reject one for their deeds because, in the end, they’re all in the same boat.

Speaking of murderers, Monty is becoming like Jasper more and more with the common PTSD symptoms.  Jasper ended his life as he knew that there would be no end to the fighting, Bellamy and Clarke dissipated Monty’s feelings as opposed to empathizing in the last episode.  What made them have that change of pace was of Cooper.

If Clarke cannot take Octavia down (Bellamy would not allow her), she would take down the person worse than Octavia-Kara Cooper.  Cooper has been Blodreina’s loyal second, and feeding her with new, diabolical ideas.

Karma has blown Cooper straight in the stomach as the sand worms consume her and kill her in a truly agonizing fashion.  Bellamy and Clarke watch her in calm, quiet remorse.

There is a twist to this plotline, however.  Octavia was not going to use the worms, but their eggs.  Indra, who has assisted in Cooper’s death (which was in vain) was not told of this, nor did she know.  It created a shift in her opinion of Octavia; it was one of high honor but resolved to pure horror.  Octavia knows that it was a set-up. 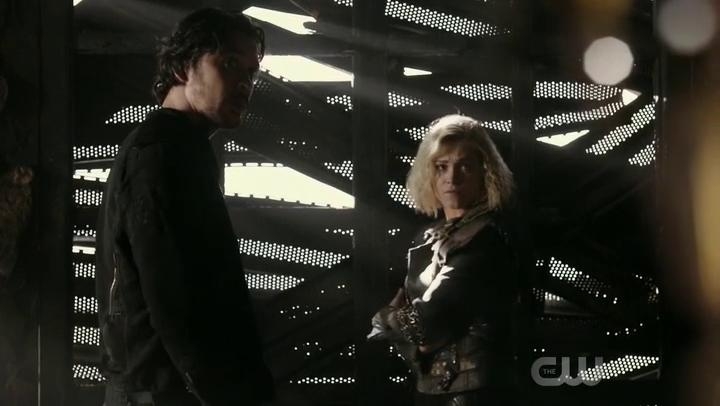 There go the hard efforts of Bellamy and Clarke.

The eggs kind of threw me off there, but don’t they need to grow to full adult to achieve their effects?  A worm reaches full maturity in three months, and depending on the stages the eggs are in, they hatch within eleven weeks.

It wouldn’t make sense to use eggs if this was the case if the waiting period to use them as weapons is that long.

We do see the rapid growth of the little squirmers, but there is no explanation of this.  I digress though.

As punishment for the death, Clarke has been arrested and sentenced to be executed.  Bellamy was just as guilty but was not arrested or punished.   Although Octavia could have easily thrown him in there, for some inexplicable reason, she didn’t.  Maybe it’s because Bell is her brother, and she still deep down, has some adoration for him and does not want him to die. 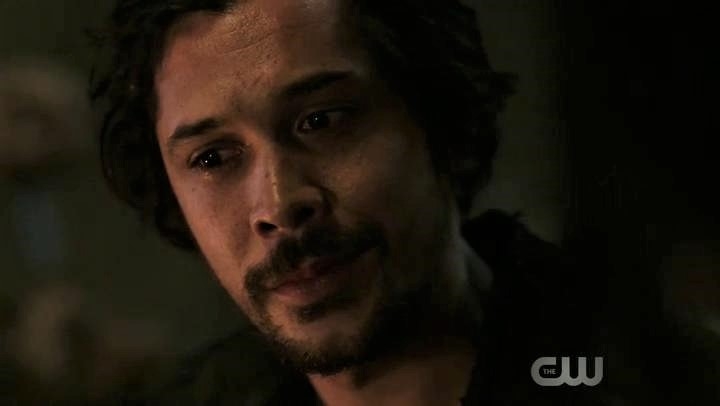 Clarke’s sentencing may have been the tipping point for Bellamy, but he also knows if Octavia continues to rule, then more innocent people will be lost and there will be a war that no one will win.  It had to be such an unbearable line and difficult to cross in order what he had to do to get to salvation.  In his heart, Bellamy was bawling, but his head held the logic.

In a seemingly bonding moment, Bellamy and Octavia forgotten that there was trouble brewing just moments ago, they enjoy snacking on the ‘rations’ (I haven’t a clue of what they’re made of) and Octavia falls ill.  Bellamy dosed hers with algae, and Octavia didn’t notice (Bellamy doing the switch without O knowing is a reflective parallel to how Echo switched the drives with Diyoza knowing), and she lapses into a medically induced coma.  Bellamy is obviously devastated about it, but he knew that it had to be done to prevent war.  To get to peace.

“My sister, my responsibility.” 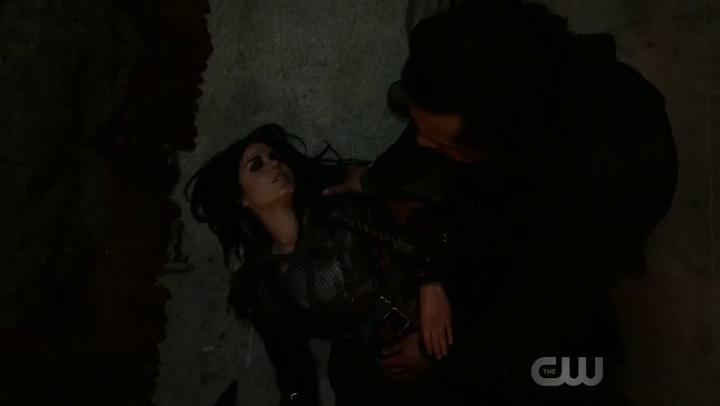 I knew that Bellamy would be the one to decide his sister’s fate early on, and seeing it unfold gave me a sense of unbelievability.  I predicted it, didn’t want it true, but here it is.  It’s almost frightening.

Above ground and in Shallow Valley, the people have battles all their own. Eligius and defectors alike are struggling to find their own moment of peace, while making choices that they hope would better life.  Raven had a traumatic flashback when she finds Abby nearly overdosed on pills; her own mother died from alcohol poisoning.  Abby’s call on shocking the one of whom she loved as a daughter tore my heart.  For Raven, it unhinged something inside that she believed would stop Abby’s spiraling addiction and that is to take down Diyoza.

Earlier in the episode, Echo propses that she will kill Shaw because she knows that it will bring down Diyoza, and at first, Raven is against it. 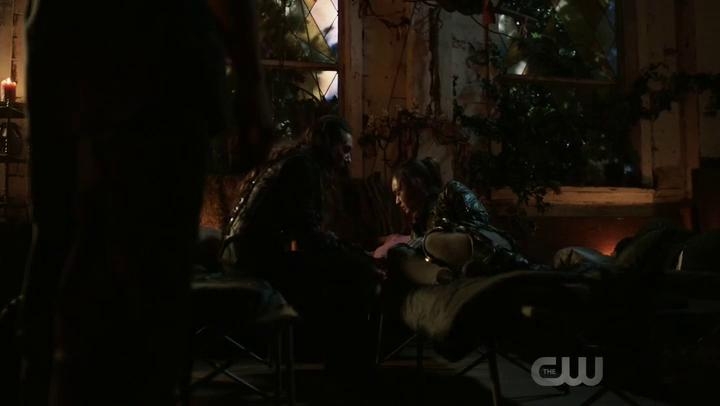 That all changes when she felt Abby’s addiction has hit rock bottom, and she instructs Echo to do it without the suffering.  As Echo has not murdered Shaw, I am going to hold her to it, even if she was told to.  This will be the ultimate answer if Echo has truly changed, and thus far, she has been immaculate.  I hate to see her character arc ruined when so much development has been made.

Aside from her demonizing, nightmarish addiction, Abby has found a cure for the lung disease.  While examining Vinton, she has discovered that sound waves break apart the abscesses.  Of course, there is not a big enough module to do the full treatment.  Thanks to Vinton’s inspiration of using the sonic drill- the machine that pulverizes rock with sound, Abby can finally treat the patients.

But it comes with a price…

Diyoza has a vivid mental painting of a life with peace.   Kane shows her a possible world of which they can all live like humane people, with trading posts, wells, medical centers, and mills.  Diyoza adds to that with a school with bleachers and playground where kids can “bitch” about their teachers.  These are all wonderful dreams, a better life.  And she desires it so much because she wants it for her kid.  The possible name?  Hope. 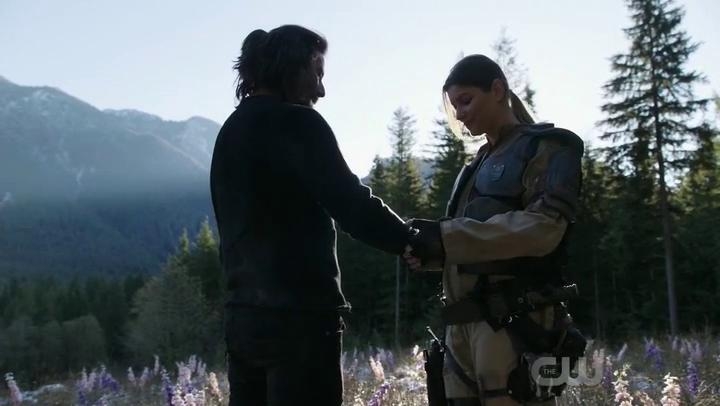 McCreary though is not in Diyoza’s ideal future because she knows that he is demoralizing and threatening.  Her expression was of pure disgust as he came back with Emori and Murphy, contrasting to the celebrating cheers of his fellow prisoners.  It’s obvious that she doesn’t want him around her child, and I am agreeing with her on that perspective.  McCreary will most likely be jeopardizing the child’s life, and that is something that Diyoza will not have.

That certainly puts a damper on his fatherhood situation, even if he does not know it yet.

Bellamy And Clarke: The One Pair Wonder

Bellamy and Clarke always possessed that luminosity whenever they’re together onscreen.  It became a natural rhythm once again, and I think we can all agree diplomatically on that thesis.  Although Bell and Clarke worked together, I felt like Clarke had full control-minus Octavia dreaming off, and Bellamy went along with it because he is and always will be loyal to her.

In the six years that Bellamy has been away from Clarke, he acquired to become a sole leader, but he has never forgotten the lessons and sacrifices she made for them.  He became stronger and matured, different than the old Bellamy.  That is not a terrible thing as he still is Bellamy. 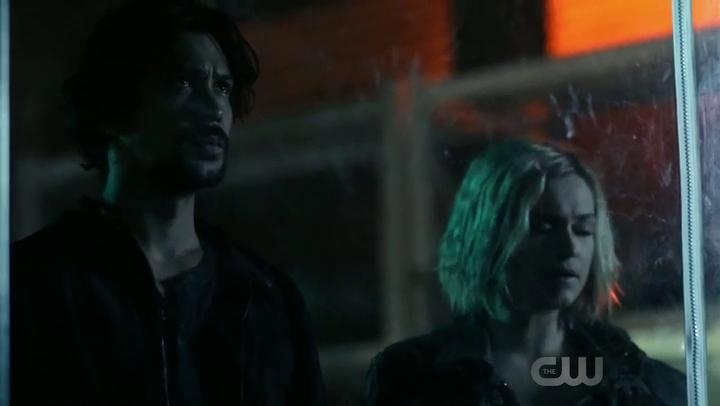 On a more interesting standpoint, I liked how the heart and head switched characters as Clarke reminded me of seasons one-four Bellamy and he as seasons one-four Clarke.  She acted this way as she is a fierce Mama Bear protecting her young and will take no chances if there are risks endangering Madi’s life.  We all know just how feisty she can get when it comes to her “daughter.”

As for love, of course, Bellamy loves Clarke.  He always had as she is inciteful, charming, and very resourceful.  A link to his life and he to hers.  But I am not going to gamble on a canon relationship just yet.  Clarke’s focus and prerogative is Madi, and she will need all of her energy now to watch over her.  Bellamy, on the other hand, has Echo, (Not bitter and it’s reality) and the rest of Spacekru, though I am guessing that Monty isn’t too happy with Bellamy now.

I said this before and I shall say it again:  if Bellamy and Clarke ever become canon, then the timing will be perfect, and everything will align into place.  I enjoy and value their friendship, and for now, that’s alright with me.

What did you think of How We Get To Peace?  Feel free to share your inputs on the battling episode.

Depressingly, we have to encounter yet another break until the new episode, Sic Semper Tyrannis which will air July 10th at a new time, 8/7 Central.

The 2018 Cancer Gets Lost Online Auction

The 100 A Sort Of Homecoming Press Release