When everything seems to be going okay, it all goes to splat rather quickly.  only to end in despair.  With such contrasting plotlines, the penultimate episode could have been better.

Hoping For A Brighter Future

Holy shit.  What an episode.  For the penultimate, Dying of the Light gave the blood a run for its money and the heart.  There were definite moments when I thought, “This is it for whoever.”

With that, The Dying of the Light also delivered plenty of emotional monuments that pulled the heartstrings tightly.  The gang is still stuck within the haunting confines of the bunker and they must plan on how to take Cadogan down, along with Madi’s rescue.

I must give discretion, as part of the review will be focused on extreme graphic content and its outcome that occurred at the ending.

That sequence, no matter how it is perceived, or its reasoning should not have been greenlit by the network.  How that was able to pass through is beyond me. 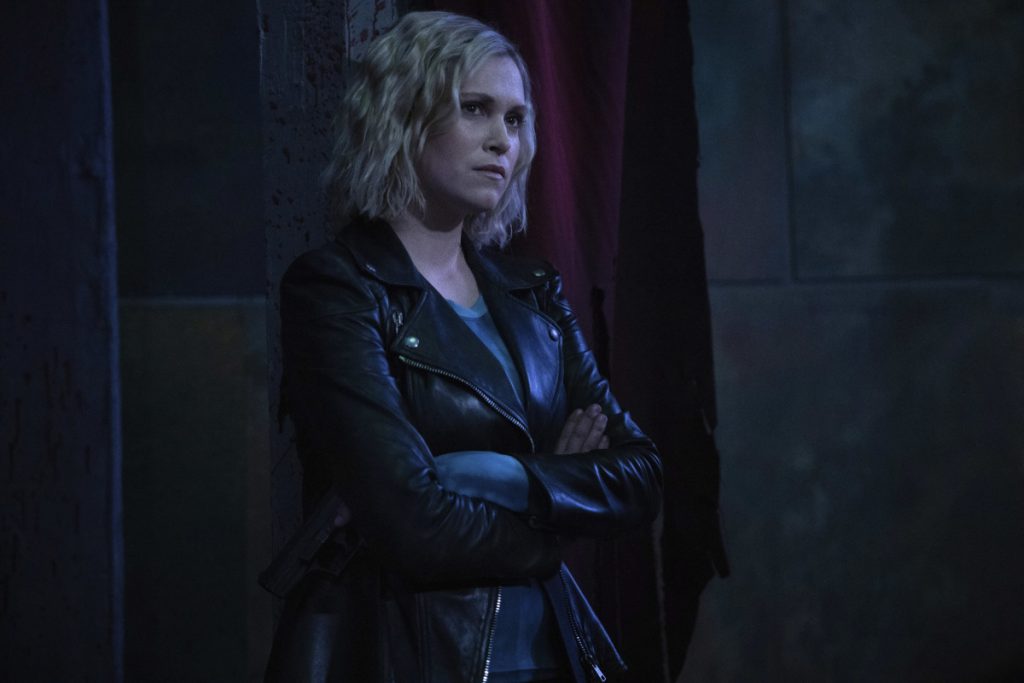 As a disabled person, it really tested my tolerance of how far writers go to be “edgy” but instead, it offended and caused emotional scars.  If you are in my world, it takes something completely massive and unjustified to offend me.

I grew up with the disability hardships and harassment that no one should have to endure, but the latter had little impact because I knew that people can be vindictive for no reason.

However, if someone dares to infringe on disability rights and tolerance, then my voice will be the most booming.

But this is not about me; this is about The 100-a show that pushes the envelope to deliver the most provocative outcome that often places characters in great peril and questions their way of life.

Anyways, let’s switch on the light and get a sharper look at the fifteen episode of the last season.

In the previous episode, a bomb blast caused a partial collapse, burying Murphy and Emori in the rubble.  While Murphy is unharmed despite that a heavy beam could have easily fallen on his head, Emori received a much bleaker fate.  A beam post stabbed the side of her stomach and caused internal hemorrhaging.

Her time is running out, according to her, but Jackson, Murphy, and Raven work nonstop with a hard effort to find the Stone so they can transport back to Sanctum as it has a fully equipped medical lab.  They are smashing through the floor as the Stone has been located.  First, it was in the wall, but now it is under the floor?  Okay.  I will leave out how it bounced from one spot to the next without assistance. 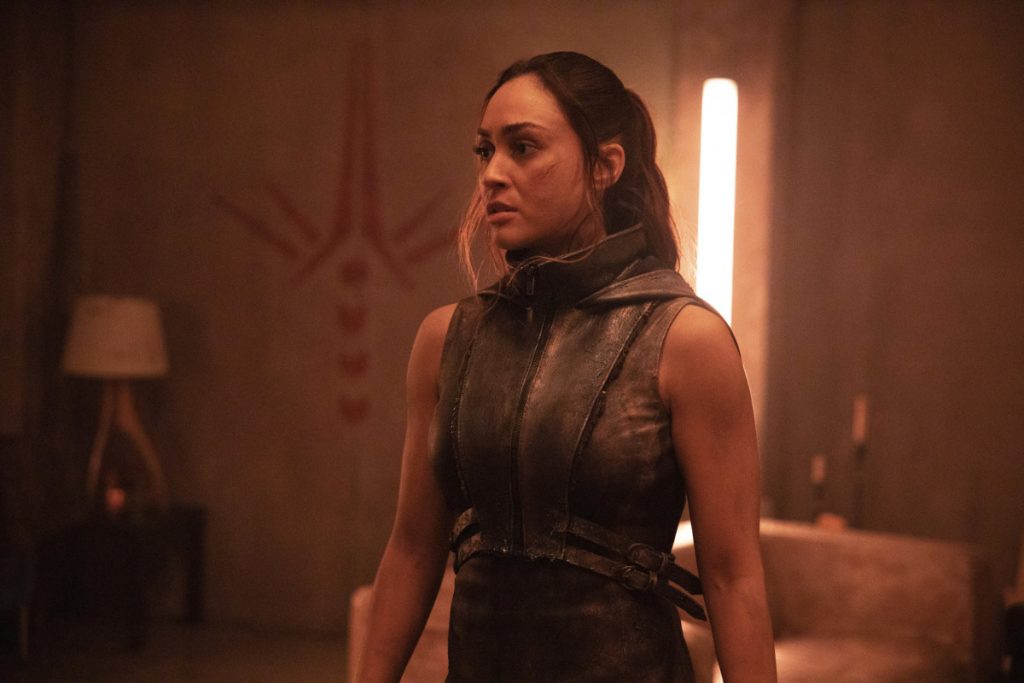 Raven is giving it her all and then some, despite that she is disabled.  She is strong-willed and determined and that was something that I missed about her.

Murphy and her switch places to floor smash and Raven shares time with Emori.   Raven is pure encouragement, and their bonding is an original ingredient of what The 100-something that has been missing this season. Emori is just a sunshine beam, undeserving of anything bad happening to her.

Then, this shit happens, and the unpleasant fouls wavered through.

Their moments together are precious as both sisters share gentle banters of whom saving who.  Having this scene accentuates their special bond, reminding us that nothing will ever break that.

Then, Emori loses consciousness, so Jackson swoops in to perform CPR.  As the only doctor, his life-saving commitment is truly depended on and needed here.

At last, the Stone has been unearthed and the four of them-with Emori on a stretcher and their fervent hopes to save her.

It was a compound and emotional sequence that reflected The 100’s original legacy and carved a new breath of hope.

Meanwhile, Clarke is frantically digging through the rubble unbeknownst that the Stone is under the floor in the music room.  She is pretty much exasperated at this point as she is not with Madi, but she mainly ignores everyone else.

I know that a mother will do anything for their children, but Clarke has taken her motherhood this season to an explosive obsession.  Children need to establish some degree of independence and Madi has been trying to voice it all season.  She made friends, adopted Picasso, and even became a regular child. 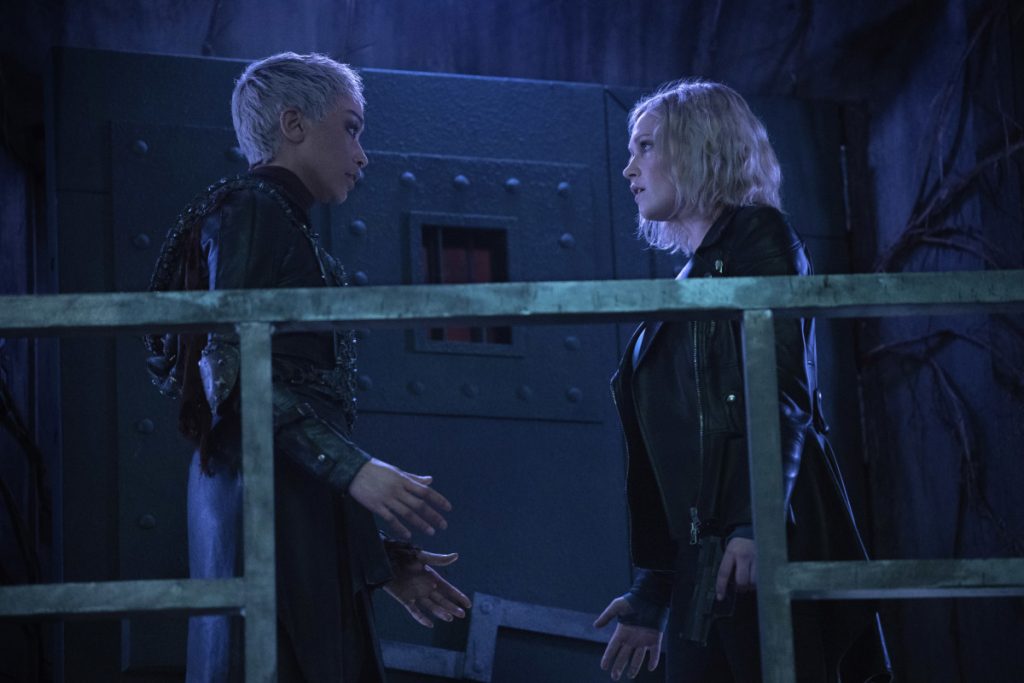 Even after all that Clarke had done, Madi still went to Bardo voluntarily so no one else would be killed.

Gaia offers her insight on Madi when Clarke breaks down, emphasizing that everyone she loves dies under her watch.  She also realized that Madi is doing the exact same thing that she has been doing—placing herself in immediate danger to save people.

Octavia joins in Clarke’s crusade to rescue Madi.  They pop the transport pills that will take them to Bardo instead of using the portal.  Of course, this has its own set of challenges as they made it look so easy in the previous episode, but this time, a person must approve your entry.

It has been a hot second that Clarke and Octavia-or should I say the Great Wanheda and Formidable Blodreina-team up to fight against the evils.

What would make this better is that Bellamy should be included.

Once approved, they wind up in the gardens of Bardo, where an army is waiting to attack.  Instead of firing back, Clarke and Octavia withhold and taken into the prison. 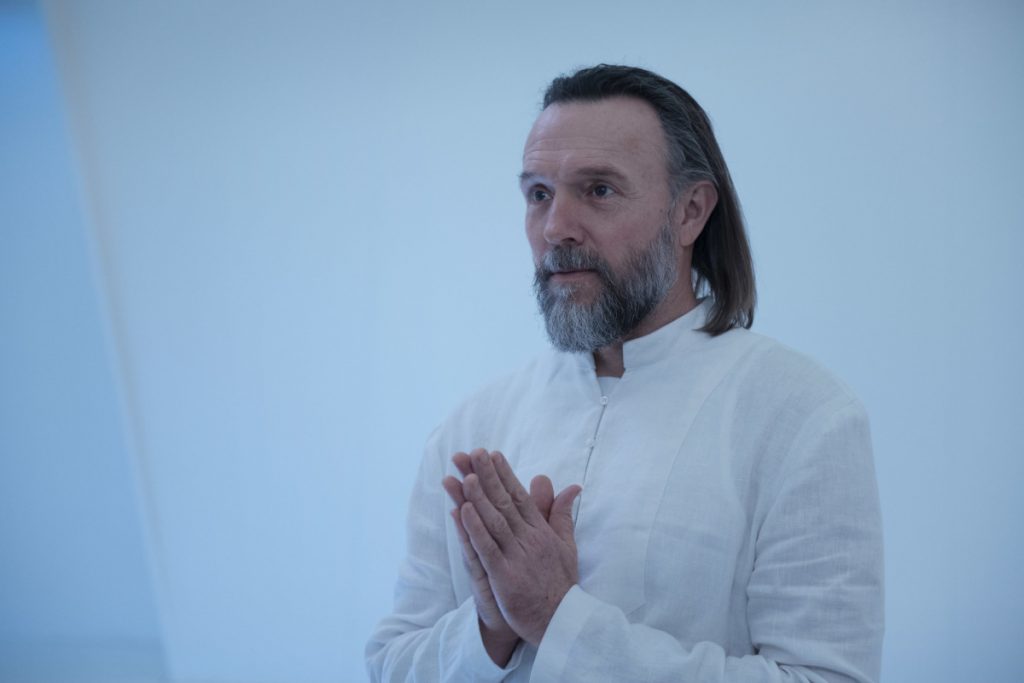 From there they share Bellamy’s existence, which raged another feeling storm.  Levitt drops in and he and Octavia share a blissful reunion.

With Sheidheda, -which was something that I never thought I see-he will be a distraction for the Disciples as the girls break into the M-Cap lab.  I enjoyed the banter that Octavia and Sheidheda exchanged, for it added a bit of comedy in such a dark episode.

Those Disciples did not use their invisibility superpower when he came barreling through them or may be they were in such shock that they lost all mentality.

Levitt then leads them to see Madi-of who had suffered a massive stroke which left her immobilized, but can still mentally focus, see, and hear.  From her viewpoint, she knows activity.

And yet, considering the end of life option, first projected by Clarke, then Octavia because Clarke could not do it.  It’s a near-direct parallel of when Bellamy and Clarke encountered a radiated Atom in season one, episode, three entitled, Earth Kills.  Bellamy did not have the heart or conscience to end the life of his friend, so Clarke did the Grim Reaper’s lease-all the while humming All the Pretty Little Horses.

The exact same tune that she hummed to Madi-as if that sonnet represented the end of one’s journey. 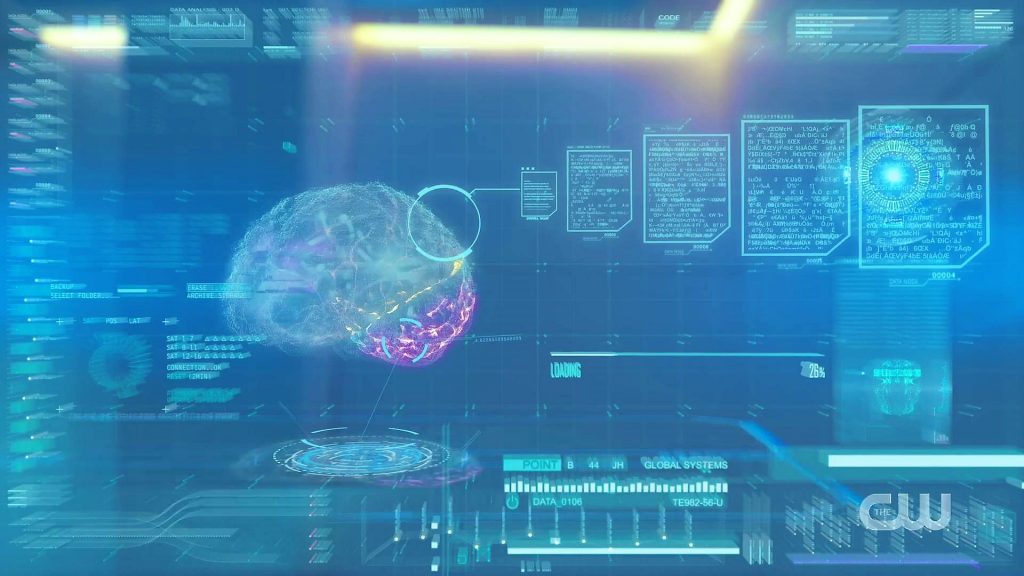 The semblance of the past and present sequences emits a cryptic response as both lives are at the hands of one Blake and Clarke.

The only difference (two if you count Octavia making the offer while Clarke could not) and it is a significant one, is that Atom demanded his death because he knew that he could not live his life in total excruciation.  He made the choice to end it, and Madi of whom still had a sound mind did not because she could not express externally what she wanted.

While this sequence itself was one of the most the most devastating and difficult to focus on, the acting from all three young women was phenomenal and raw.  It was handled in a way that we cannot imagine.

Eliza poured her full heart, mind, and soul into the emotionally charged performance and there is something so empathetic about it.

However, we are not the deciders of life and death; that role has already been assigned to the Higher Power-or whatever you want to believe. When such a delicate case has fallen into our hands and act upon it, then nothing but the desolate ramifications will follow.

Clarke may have killed Bellamy because she felt that he was an absolute hazard to Madi, but in the end, it was Madi who suffered because of his death.

Just think that one man’s peaceful expedition, trying to find some calm in a storm of great devastation, and ultimately dying for them places great turmoil in the narrative.  Clarke not only lost Bellamy, but she also lost her daughter due to her actions. 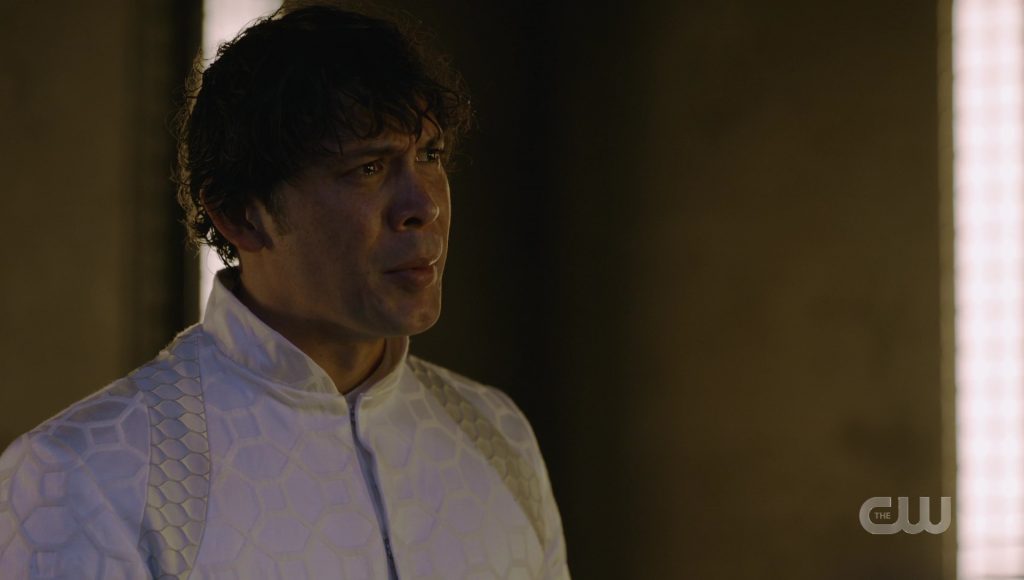 The sequence also greatly illuminates that if you are disabled or in a PVS (Permanent Vegetative State) then your life has no value or accordance; that you are just another “null” of unimportance in this world.

That simply is not true because we all leave a meaningful imprint, regardless of what challenges may lay. These challenges-no matter how strenuous that their obstacle, shapes us as people as we take what we endured and surge it into our cognitive flow.  We hope that our situations will help and inspire those who come across.

That inspiration may lead to the aspiration to become better advocates for humanity so that there are less suffering and pain, but also a redirection of knowledge on disability rights and inclusions.

Fortunately, for Madi, she does not receive the eugenic ending, but that was only because Cadogan got the Code for his Last War.  Had he had not, then Madi would have met her doom.

In a storm of pure fury, Clarke and Octavia (and leave Madi) go after Cadogan in hopes to stop him.

Oh, what could go wrong with this, except everything?

What did you think of the Dying of the Light?  How about that ending and Emori’s courage? 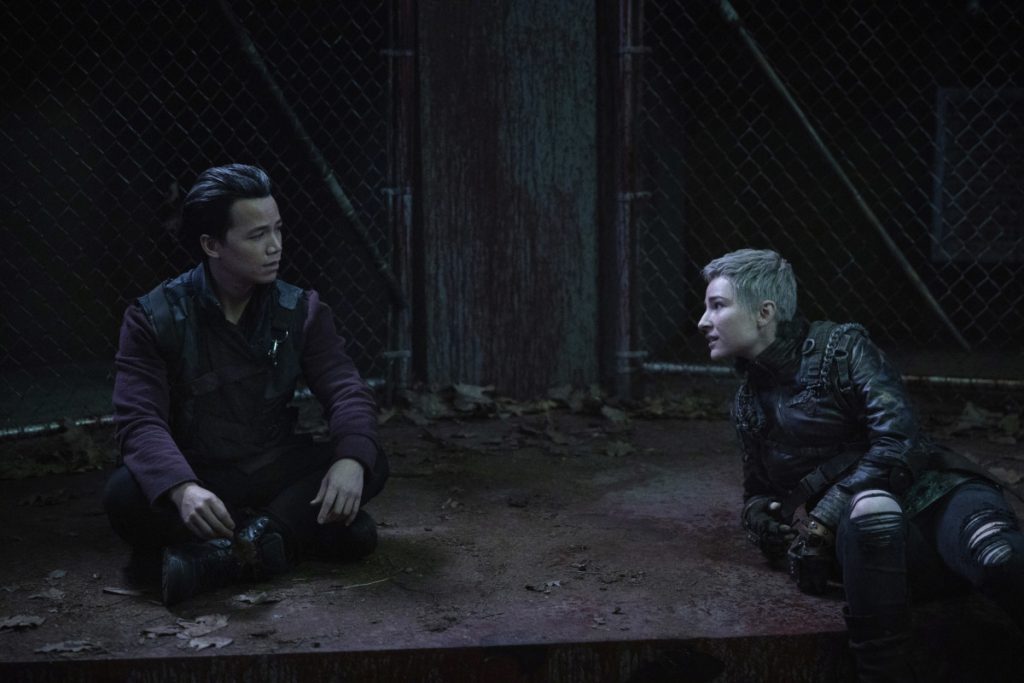 Next time on The 100, the season finale, The Last War.  Who will pass the test, and who will not?