Get ready to swoon over Bob Morley’s directorial debut!  In The 100 Ashes To Ashes, Clarke arrives back in full throttle; Echo reconnects with a childhood tragedy; and the Golden trio, Bellamy, Clarke, and Octavia collaborate once again.  Ashes To Ashes was written by Charmaine DeGrate and offered a colorful and pragmatic lens into the narrative.  Here’s my take on Bob’s episode and the exciting highlights of it!

“The Rippling Of Reflections”

What a gem The 100 Ashes To Ashes was!  The episode tied in lots of mystery, while continuing to openly give a strong and fluid narrative.  I must admit, that this is hands down one of my favorite The 100 chapters this season.  The cinematography, the epic smoothness while still providing action, and the pendulum swings of correlation within characters. 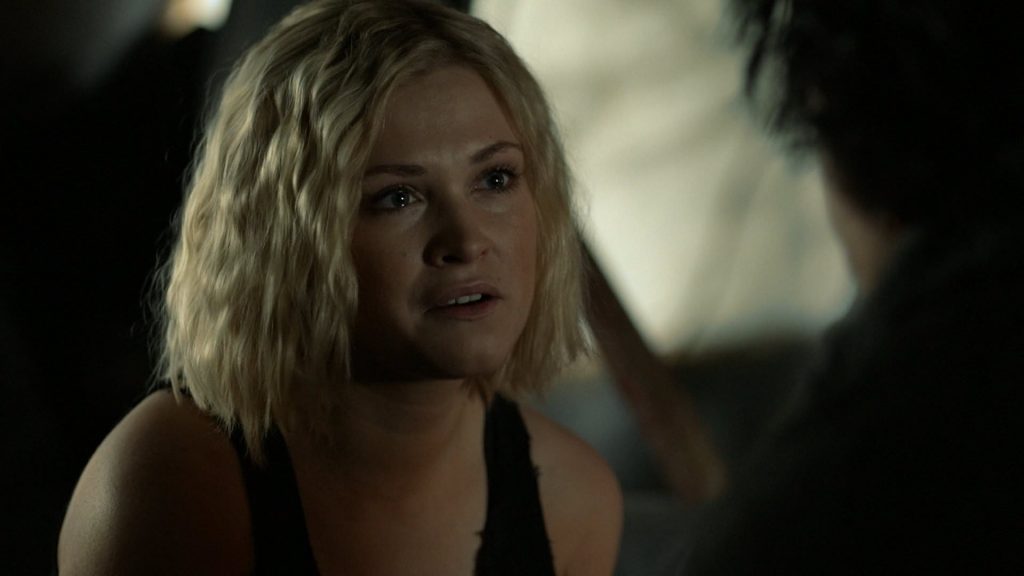 Written by the talented Charmaine DeGrate (this was her last episode 😭) and directed by cast member Bob Morley (brilliant!), Ashes To Ashes produced a well-framed and gorgeous screen-scape to an ominous narrative.

To summarize, we learn about a character’s tragic past, Clarke, Bellamy, and Gabriel explore the best option for the rescue, the Blakes finally have that long-awaited discussion, and the other little things that built up. The acts presiding to the big showdown in the season finale.

Oh, Clarke!  How I missed you! It’s great to finally have you back.  Now that she has finally sprung from Josephine’s mind, she goes back to business.  Saving their people.

Bellamy, who is wrought with guilt about leaving the others to save Clarke, devise a new plan to take down Sanctum.  Josephine’s mind drive was going to be used as a bargaining tool, but now that it’s blank, that idea is no longer doable.

So, what’s Plan B?  Clarke will return to Sanctum as Josephine as Russell has zip clue that the drive has been ejected and assumes that his daughter has passed.  It’s a dangerous mission, for sure, but if they are to stop the Primes and expose the truth that they are worshiping false Gods, then this is the only choice. 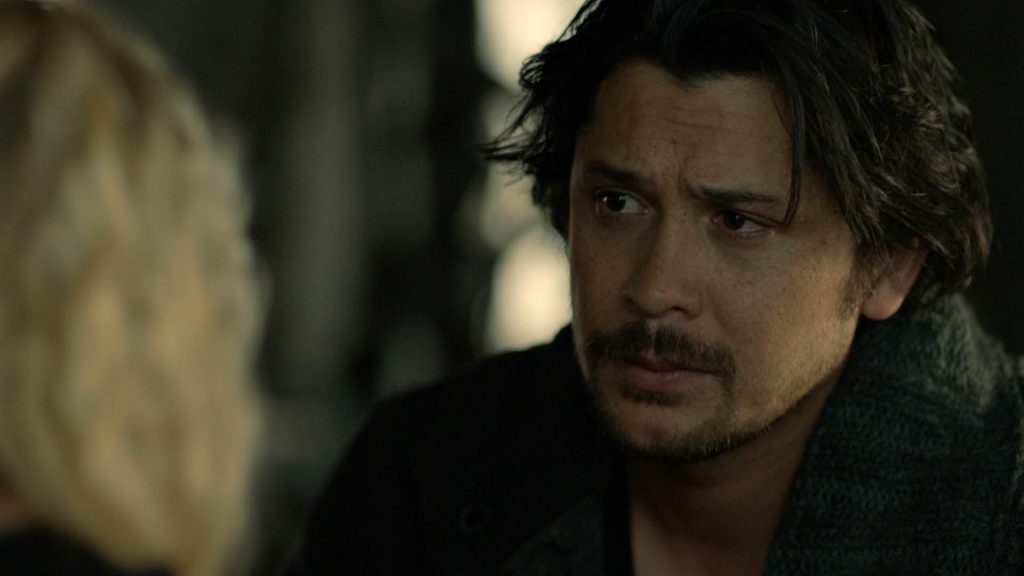 At first, Gabriel, Layla, and the rest of the Children reject the idea, but Clarke working on the inside whilst they work on the outside to bring down the Shield and set off toxin bombs to cause a Prime riot.

Then, there is Bellamy Blake.

Bellamy, naturally, isn’t too keen on this plan because it can be fatal. He owns a strong, grasping, and understanding fear of losing her as he has already.  It completely devastated him; it would send him to his grave if Clarke died again.

Clarke is aware of his feelings in regards to devotion and protection, and whilst she does have identical ones towards him, they both know that dangerous and perilous operations are a must.

Transitioning into the cheeky Josephine is definitely filled with substantial obstacles, but also gives charm and magic because unlike Josephine, Clarke captures Josephine’s essences and nuances, without error.  When Josephine masked Clarke, it wasn’t as convincing as many, including Bellamy seen right through it.

He knows his Princess well—that’s for certain.  But he also knows that Clarke is an unstoppable force to be reckoned with. 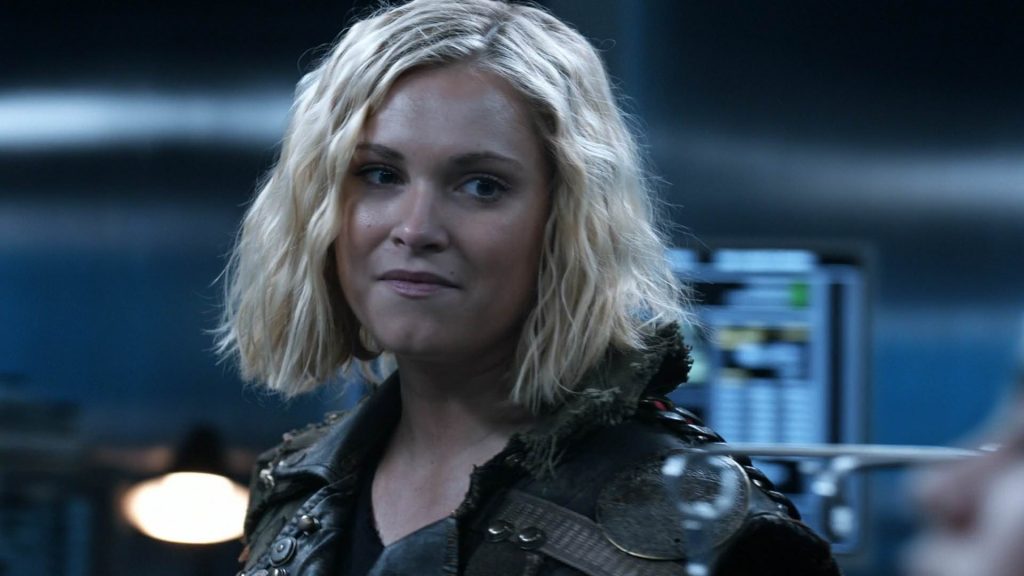 Clarke brilliantly plays the part of Josephine; Russell is “Boo-boo the Fool” when he is reunited with her at the entrance of Sanctum.  Like a doting and loving father, he is overjoyed and relieved to see her.

Well, I have a feeling that Russell’s happy mood will be rocked.  Clarke and her squad have a trick or two up their sleeve!

Clarke’s first priority is Madi, who is strapped down in the lab.  Unfortunately, Abby did disclose the bone marrow formula so that hosts can be created.  I was hoping that it was just a ruse to get out of being burned at the stake, but alas, the child is the first victim.

And there is absolutely no doubt that the entire ordeal is breaking Clarke’s heart.  The nightmare of Mt. Weather has been resurrected and experiencing it all over again is something that she’d thought she would never see again.  And in the eyes of her daughter. 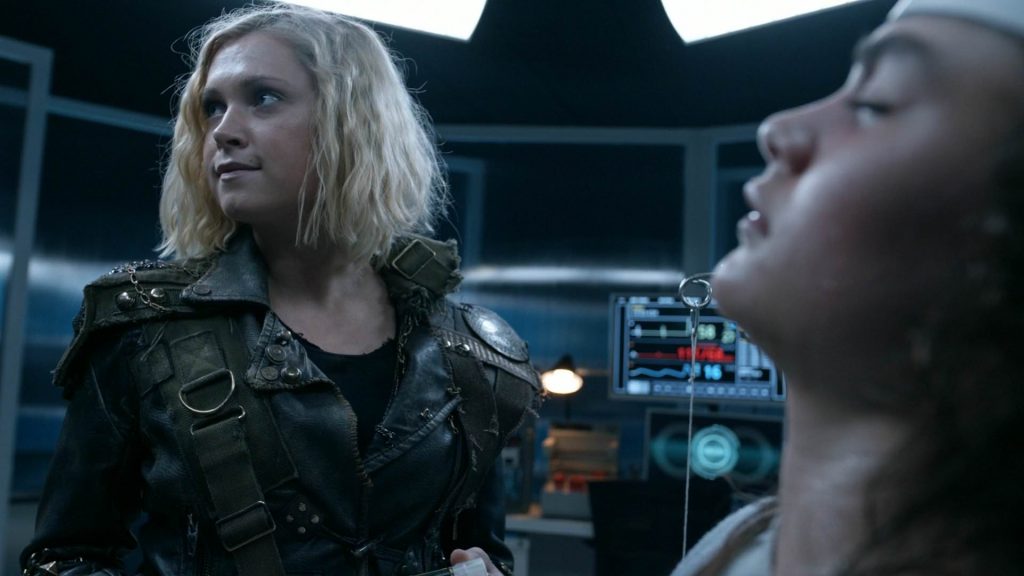 However, if Clarke’s to pull off this charade, then she must show no emotional response, other than Josephine’s sarcastic witticisms and buoyant body language.

Again, Eliza Taylor nailed it with her performance as she bottled and encapsulated Josephine perfectly.  To master a character role that is complete polarization of the one you’ve tailored for so long takes talent and crafting.  Taylor coveted Josephine without a moment’s hesitation, taking from what she learned from the real Josephine and molding the villain into an identical focus.

While Clarke is compassionate and meticulous, Josephine is lethal and malicious, there’s a radiating delight to witness Taylor’s portrayal of these two characters.  I believe that no other actress could offer a range of multiple talents.

I am truly glad to have Clarke back as The 100 surely isn’t the same without its feisty and persistent protagonist.

An Echo Of Time

S2In Ashes To Ashes, we dug deep into the childhood of Echo.  Her childhood story is nothing short of traumatic and heart-breaking.  Strapped in so that Ryker could make her into a Nightblood, Echo comes up with an intelligent method to stall Ryker’s procedure.  She reveals her secret pain.

In a stunning flashback, filled gray tones, and soft wonders, Echo and her friend are practicing archery.   It turns out that the young Echo was not the true aimer as she is in adulthood.  Her friend—who was the real Echo, was the prodigy of mastering the arrow. 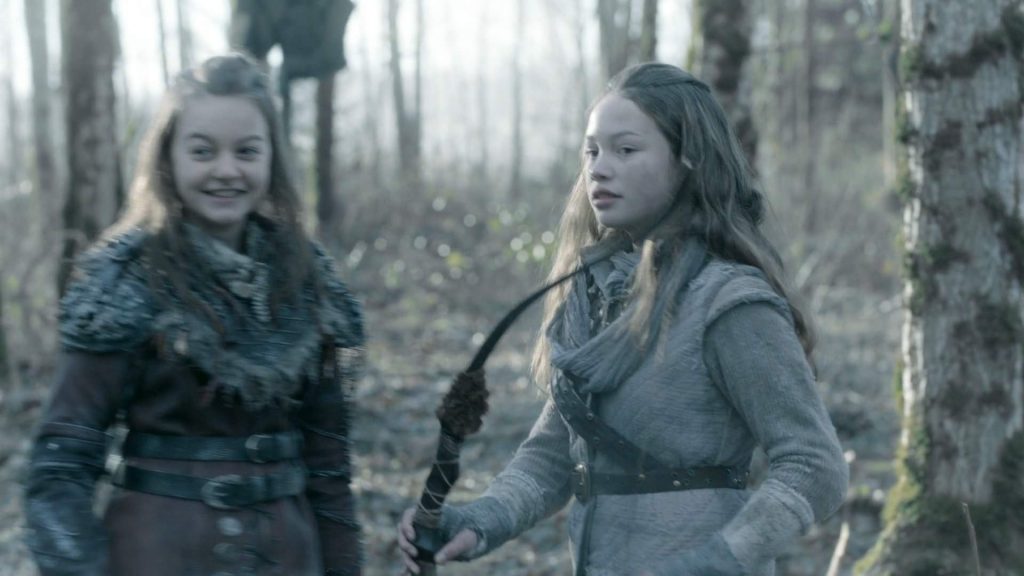 The Echo that we all know, is actually Ash.  She‘s exposed as a shy, meek child with confidence issues and fearful of Queen Nia.

Then, the real emotional train begins.  Nia appears unexpectedly with a Sangedakru spy and unfortunately for him, his time is nearly up.  To prove that she is loyal to her Queen, Azgeda, and to prepare her for the delegation trip with Sangedakru, Echo must assassinate the spy.

She misses her aim, due to anxiety and apprehension.  The Queen gives her one last chance to prove her worth and orders her to fight to the death with Ash.

Both girls do not want to engage, but if they refuse, then they’re both dead.

Talk about being placed in such a situation!

While Echo goes for the obvious kill and apologizes, Ash takes her by complete surprise.  She is upset, devasted, traumatized, and shaken by her action.  This is yet another loss at such a young age as she lost her parents due to Azgeda burning them alive as she revealed to Bellamy in 604.

Queen Nia is solemnly impressed with Ash’s upgraded skills and appoints her the new “Echo.”  Her former identity is now extinct, and from this stage forward, she’s groomed into the perfect royal spy. 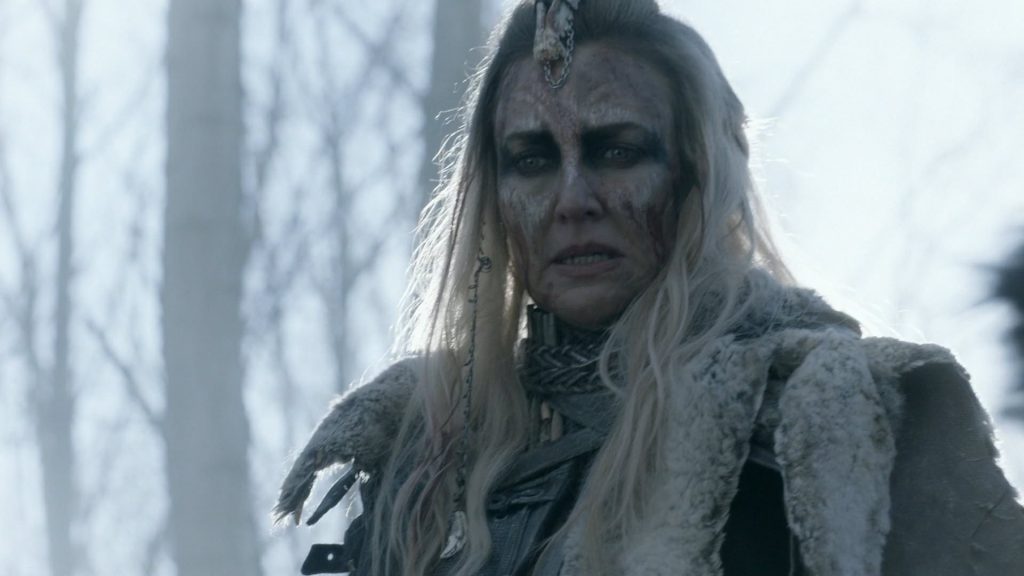 Judging from Echo’s point-of-view, she didn’t want this life, and because of all the pain that she had to endure as a child, she never brought it up again.  She was taught to freeze her emotions so that she couldn’t experience remorse for mass executions.

With Skaikru and building a family foundation, Echo allowed herself to shed some of the Azgeda darkness.  Having a family taught her about unity and love, although she hasn’t shared her deepest and most ominous secrets.

The dynamic about Echo/Ash is that everyone has their own interpretation of trauma.  While she may close off, this doesn’t reflect that she is handling trauma incorrectly.  Echo has been ingrained with blocked and toxic mentality at such a young age that it’s difficult to release suppressed events.

Bellamy did manage to thaw out some of the hardness because he has shown her a different side of life that she’d thought she wouldn’t have and never knew existed.

While Echo’s backstory doesn’t seem that dramatic-as every character has had a horrible upbringing-it did offer a better understanding and purpose for her. 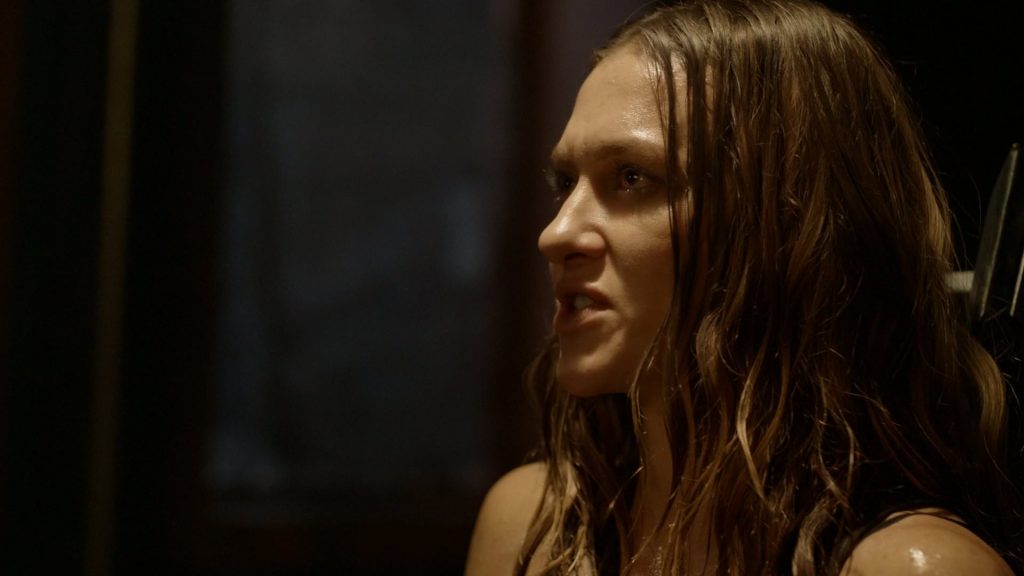 Ryker is the least likely candidate for Echo to share her story with, but if she hadn’t, then she would have not been able to escape, thanks to Gaia and Miller.

And killing him the only way she knows how.  I viewed it as an act of self-defense because he would’ve killed her friends and the injection was unconsented.  To kill without reason

Yet, she is now a Nightblood and destined to become Simone Lightbourne.  Russell made that clear earlier when she was apprehended for crimes.

Taking a sigh of relief, Echo will not go that route.

But what will be her use now as a Nightblood?  It’s just might be set up for the larger projection in the finale.

The Blake siblings finally had that discussion.  After spending most of the season with clenched teeth, Bellamy and Octavia finally laid out their transgressions and hostility.  Octavia has had her epiphany in the Anomaly, killing Blodreina as a symbol of letting that dark life chapter finally go.  It was not a simple conversation for either, but it was relieving. 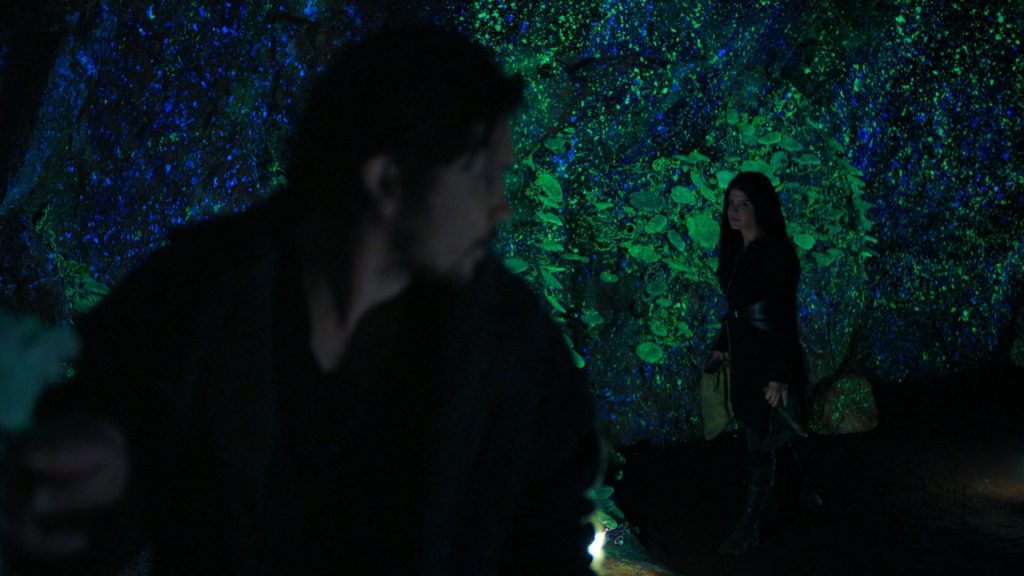 Octavia spoke how she lost her brother’s guidance through her path of destruction, how she needed him the most at that time.  She was lost and broken, and without Bellamy, she lost herself.

But placing the blame isn’t going to resolve things.  Octavia is a grown woman, fully capable of making decisions and deciding on how to problem-solve them.  Her choices made during her reign were designed to save her people.  But at what cost?  Because of the tyranny, Octavia lost everything and everyone.

Now, it’s Bellamy’s turn to share on what he endured through her.  Comprehensibly, breaking off his responsibility with his sister was a difficult, but much-needed choice.  Bellamy garnished attention and protection over Octavia and the outlet has been less than positive.  Albeit the mistakes, Bellamy did want Octavia to enjoy a bit of life. 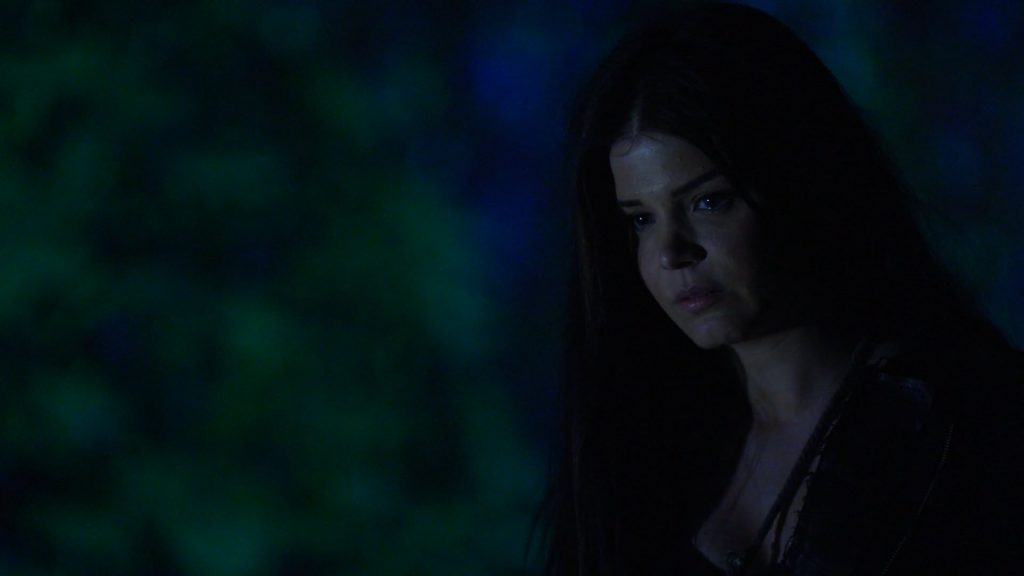 She turned on her own blood, the most brutal was sending him to die.  It was the final nail in the coffin for Bellamy to cut the responsibility and for her to grow up.

Bellamy will always love Octavia. But now it’s time for him to love himself.

The lightest arc of Ashes To Ashes goes uproariously to Gaia and Miller.  Together, they embarked on a pretty sweet journey.  Gaia was the logical thinker, while Miller became “Houdini.”  It was a match made in fandom heaven as their skills enhanced and complimented and they just got along so well.

Can’t get any better than that! 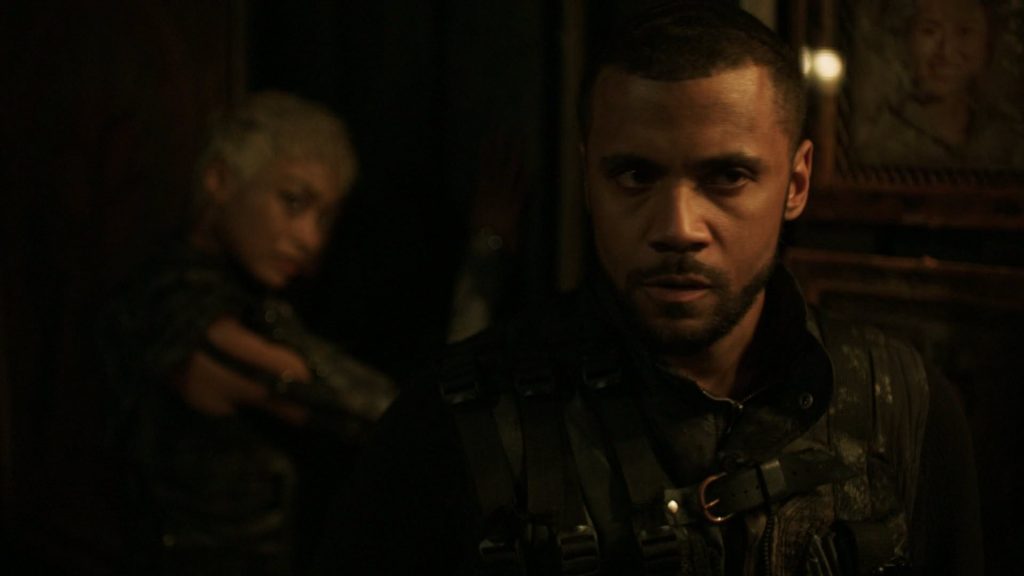 What did you think of  The 100 Ashes To Ashes?  How amazed and marveled were you with Bob’s directing?  Did you think Echo’s backstory was grieving?  What about her becoming a Nightblood and what purpose will it serve in the future?

Let us know in the comments!  Remember to be civilized, but honest!