The 100 The Old Man And The Anomaly Recap-Review

The 100 The Old Man and the Anomaly was yet another grasping and chilling episode.  The limelight is directed on a deserving character, and there is a lot of other cool stuff to set your eyes on.  Check out our recap-review for The Old Man and The Anomaly!

The 100 The Old Man and the Anomaly Recap-Review

Another week, another killer episode!  The 100 The Old Man And The Anomaly expelled plenty of suspense, tripping emotions, and eye-widening twists.   Written by Miranda Kwok and directed by newbie April Mullen, Josephine is as wicked as ever, but the real VIP finally grasped the spotlight.

Other cool stuff included is that crazy green anomaly, a character reveal, and yet another body swap?!?  I mean, this is The 100 after all, so there is no limitations just how insane and powerful the story and its characters can go.

The rescue mission for Clarke is on!  Bellamy informs Spacekru that Clarke is alive, that they must come up with a plan to bring her back.   Madi thinks-or Sheidheda thinks that they should kill all the Primes, take their compound, and use the lab to resurrect.  Nobody agrees with her idea as it’s the wrong way to go.

While Bellamy may have been the leader of the Clarke Mission, the real and well-deserved praise goes to Emori.  Brilliantly making Ryker, Josephine, and Murphy that she was siding with them to kill Clarke.  She out of the group is the most tech-advanced so her genius is valued. 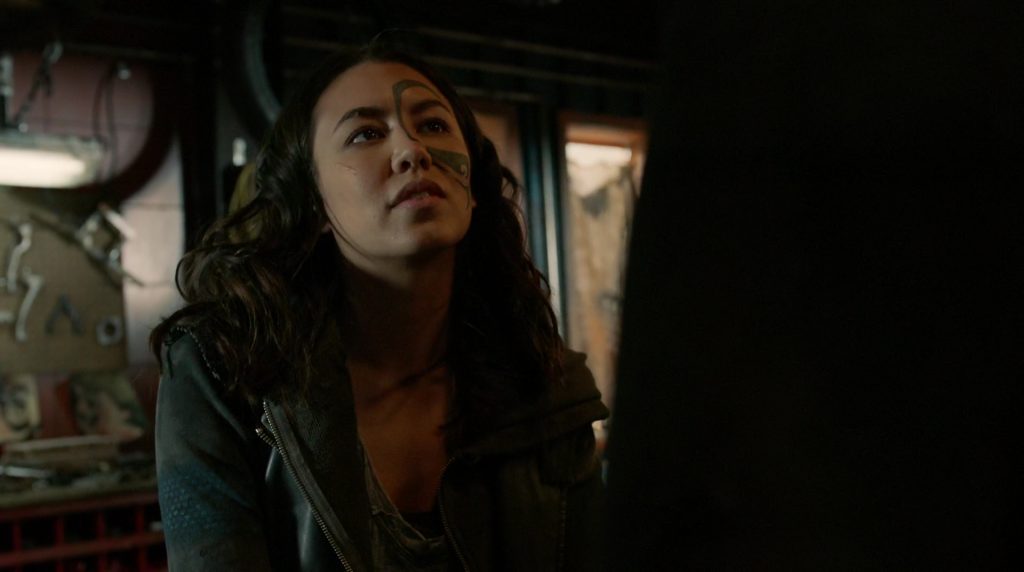 Yet, the surprise twist came from her, as she just flew out of Sanctum like a bat out of hell to disable the shield with the EMP.  This was a bold choice as it reflected that she will have to go against the man of whom she shares her heart to save the woman that saved her family.

Murphy’s proposal to Emori was multi-faceted because it symbolized both.  Murphy, finding it as a solution to survive with his lady love at his side, along with getting what he desires.  For Emori, the gesture not only represented her undying love for him (they’re two peas in a pod), but it opened the door for her to prove not to the company around her, but to herself that she is more than Murphy’s girlfriend, and holds solidarity all her own.  While Bellamy has given her the brush off by not informing her that Clarke’s alive, I believe that Emori has seen it as the “fuel” to kick her ambition.

Emori has done exactly that; carefully placing her plan so that Clarke can be revived.  Despite a few glitches, such as Josephine and Murphy revving up, Emori was able to execute her plan. With Echo’s assistance (by the way, I’d love to see more of this friendship) the radiation shield was lifted. 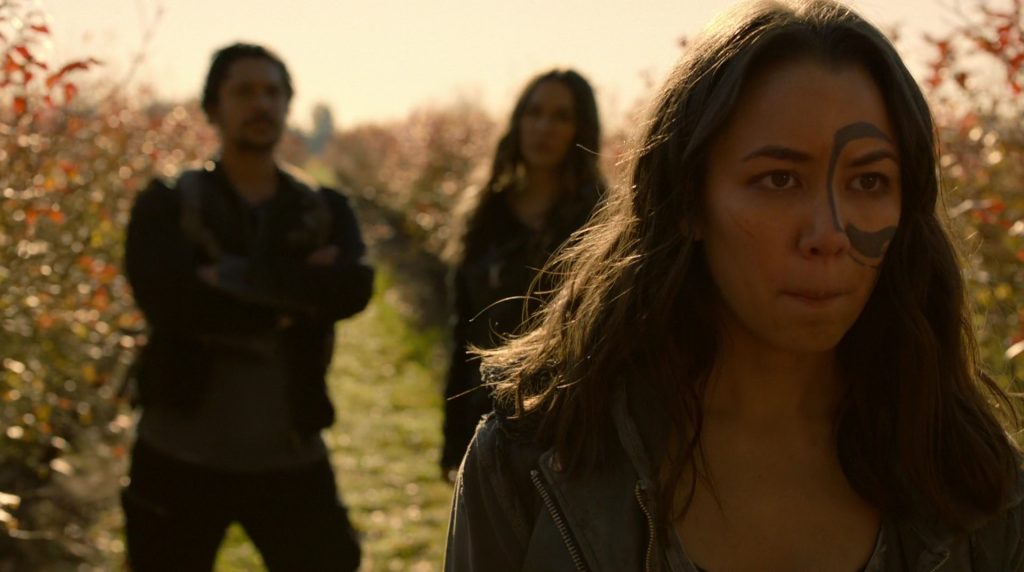 After that sweet Becho good-bye, Bellamy whisked Josephine/Clarke into the forest to seek out a way to save Clarke, but not before Josephine grinds the crew with the sacrifice of Murphy.

Murphy is hurt badly, but only Emori seems to be the only one who cares.  The injury, like the one in the season 5 finale, ignited the love she has for her man.  In an upgrade to her response of “not leaving the man she loves behind” Emori accepts his proposal; always wanting to be with him.

While it was truly a love story writing itself, Emori had to prove her value before she could take on being Murphy’s wife.

Yet, Murphy or no Murphy, Emori is a very substantial character.  She always had that fierceness about her which I love because it’s never often to have a disabled woman with such development and storyline.

Emori doesn’t allow her disability to get in the way of her highest potential and just desiring a normal life.

The Other Cool Stuff

I am just going to wrap this review up as I have run out of time to structure the other elements.  It doesn’t imply that I found the acts any less exciting and impactful-it’s just a time barrier.

So, Octavia and Diyoza are still lingering in the forest, still on the hunt for the anomaly.  Well, we found out that it completely reversed O’s aging, and sucked in Diyoza who was chasing her young daughter.  I hope that this is not the end for Diyoza because well, she is Diyoza. 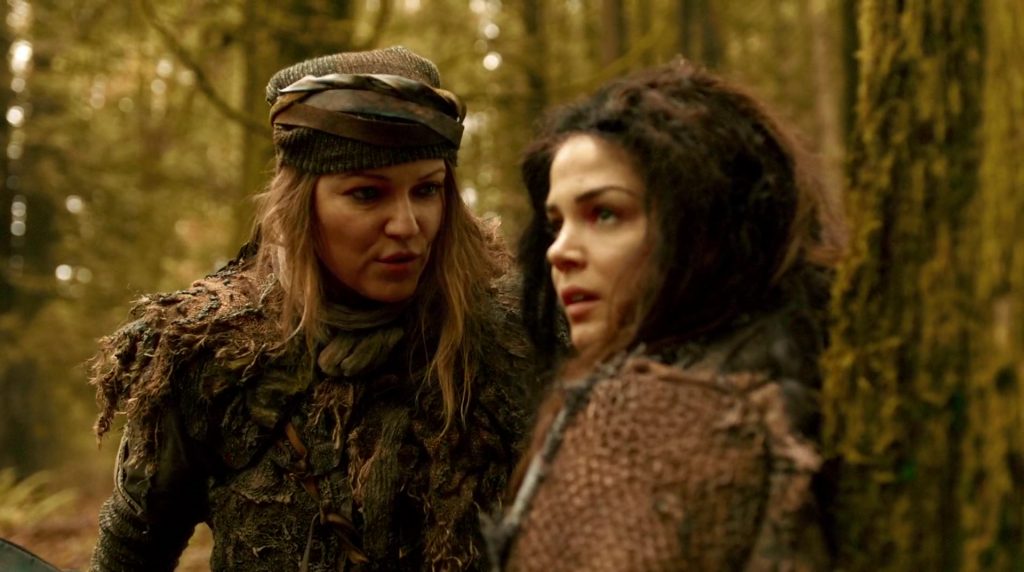 As for Xavier, he is not Xavier.  He is the host for Gabriel, which didn’t come to me as that large of a surprise because subtle hints were dropped, and I just connected the dots.

Moving on, Abby finally went over the edge of medical honor by injecting Kane’s mind drive into a new host body.  The new Kane is a younger version of the man she loves, so this may or may not get controversial with the age gap. Kane, once he wakes up in Gavin’s body, is not pleased with what Abby has done.

Abby is frantic, believing that she cannot live without his love, so she has done what she did to save and keep him.

How will the pair work out now, knowing that this barge has been placed?  As I much as I love and adored Kabby, it’s going to be difficult to see Gavin (Greyston Holt) take Kane’s place.

With that being said, I am curious to see what happens from here. 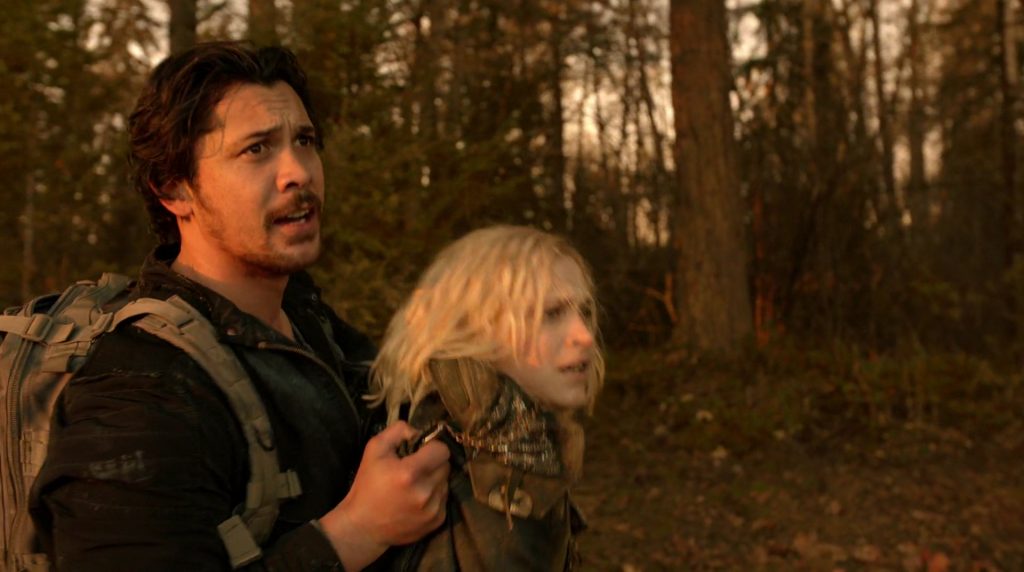 What did you like about  The 100 The Old Man and The Anomaly?  What will happen to Bellamy and Josephine in the woods?  Is Diyoza really gone?  What will be the fate of Jordan?

The 100 What You Take With You Promos

The 100 What You Take With You Preview