Emotions were unstacked in The 100 Matryoshka.  And another great thing was unstacked too!  See our recap-review for the tenth episode of season 6!

“Death Is Definitely Not The End” 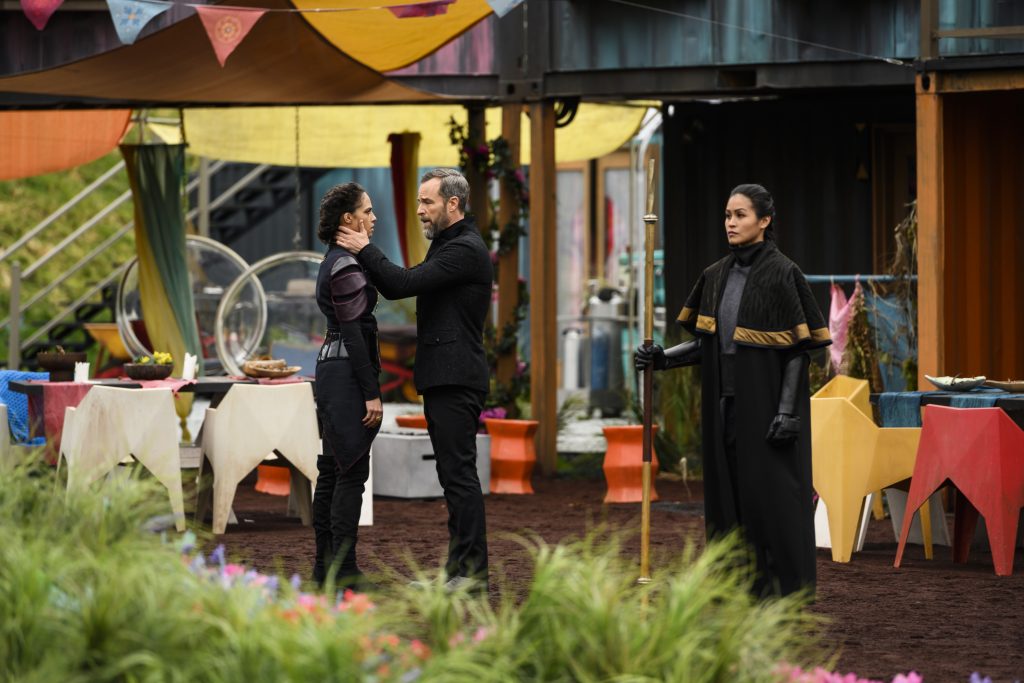 My heart can’t stop pounding! How great was Matryoshka?!  I can’t even get over one delightful scene because, you know, it hit the feels.  Comprised by Drew Lindo, directed by the episode rattled my bones a bit because I thought for sure someone was going to die.

And that would have been a major jolt. Considering how we lost Kane in the previous episode, What You Take With You.  I would not be able to bear it.

And the ending!  The ending alone was probably-if not the best-scenes The 100 has done.  And it’s not just categorized in shipping, but the overall emotional and built-up investment of two characters.  It’s series’ buildup, brilliantly set to reach the highest climax. 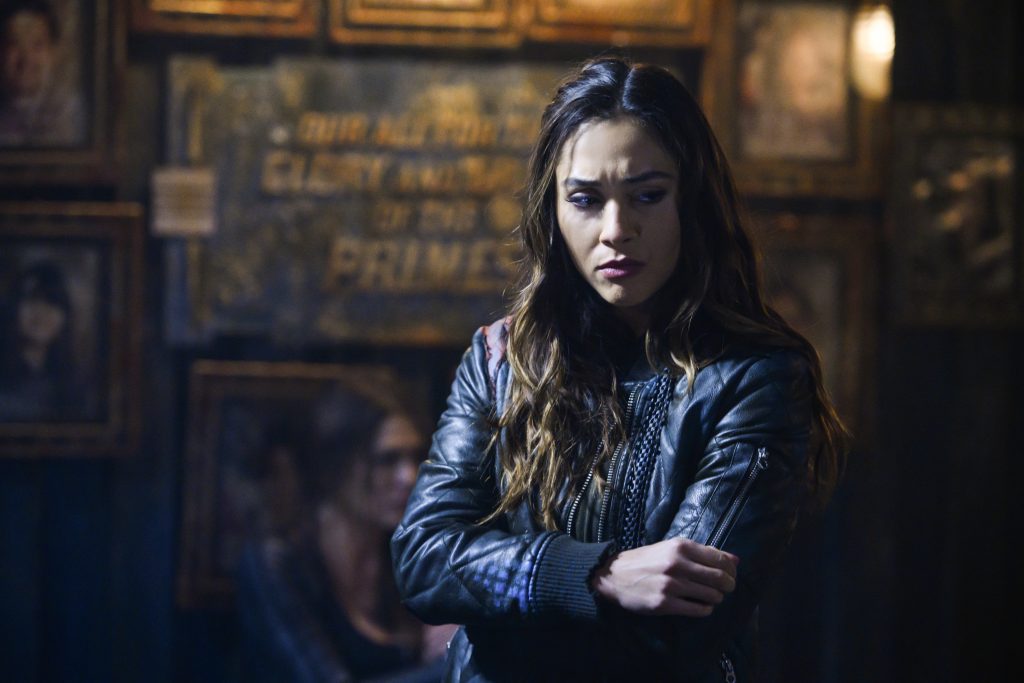 That is something very few shows, or even films accomplish because getting the right chemistry, development, and pace is often intermittent and a tough goal to achieve.  If a media piece can get the right formulation, then poof!  It’s marked Aas one of the greatest entertainment values in history.

And then we got that scene (again!).

Of course, in true fashion, I won’t disclose who the two people are, but I think that you’ll be pleased!  Let’s continue on with The 100 Matryoshka!

Death Is Life/Life Is Death

Is everyone okay and stabilized after watching Matryoshka?  If you’re all are fine and revived, let’s begin!

The situation has gone a few degrees above insane inside the holy land of Sanctum.  Madi is still being very deliciously evil because Shiedheda is still very much obsessed with her.   While Madi is enjoying being the brat of the bunch, the others find it to be a dangerous circumstance.

Especially when they must pick who to die for the treacherous crimes!

Gaia has the crazy idea of killing her, but Abby won’t allow it.  After all, she is just a child; that would be unethical.  Earlier, Simone exposed to Abby that Clarke is dead, and Abby is furious.  The way that Simone dropped the news was pretty callous and cold.  She, of all people, should have reached out empathetically as she too, lost her daughter. 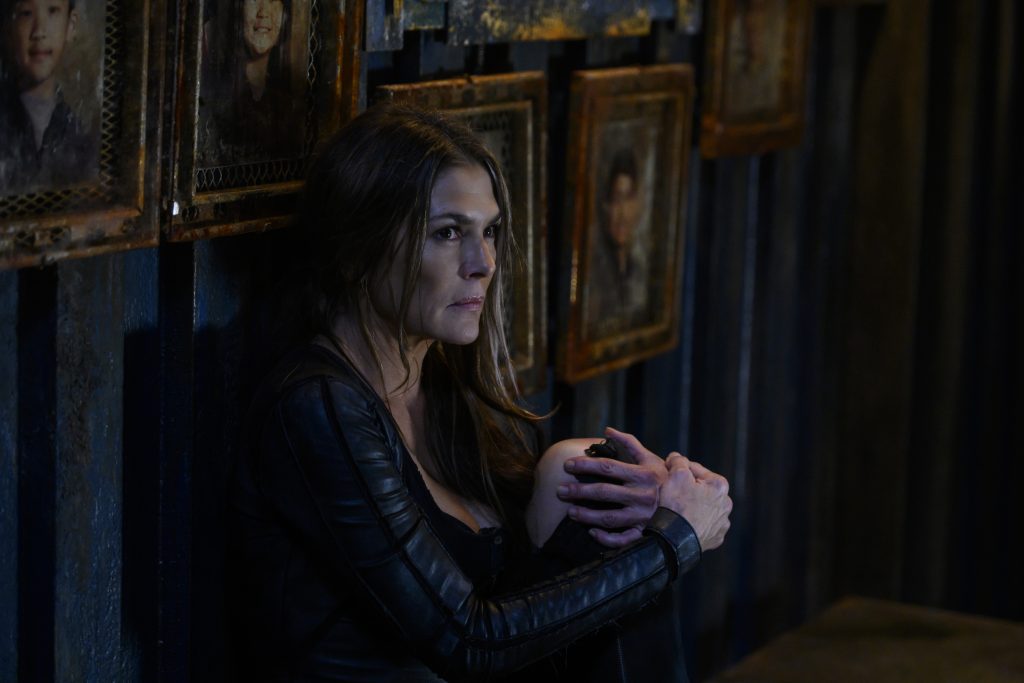 But Simone has been a bitch throughout the season, so why should she shed that now?  Despite that, she otherwise has been interesting and enjoyable to watch.

Continuing with the Sanctum scrabbles, during an intimate lunch, Russell and the other Primes receive an unexpected guest.   At first, he is greeted with neutrality, but the lunch takes a dark turn.  Tai, angered at his baby’s sacrifice, kills Simone.  This, of course, places Russell in yet another grieving spot.  He has no clue where his daughter is, albeit Tai wanted her dead in the woods, and then he witnesses his wife’s murder.

It’s not the fact that her mind drive can be taken out and injected into another willing host; it’s the fact that witnessing it can sever an emotional response.  Russell clearly adored and passionately loved his wife.  So much so that he had brought her back multiple times, and possibly thought that this would be the very last time that Simone would be hosted. 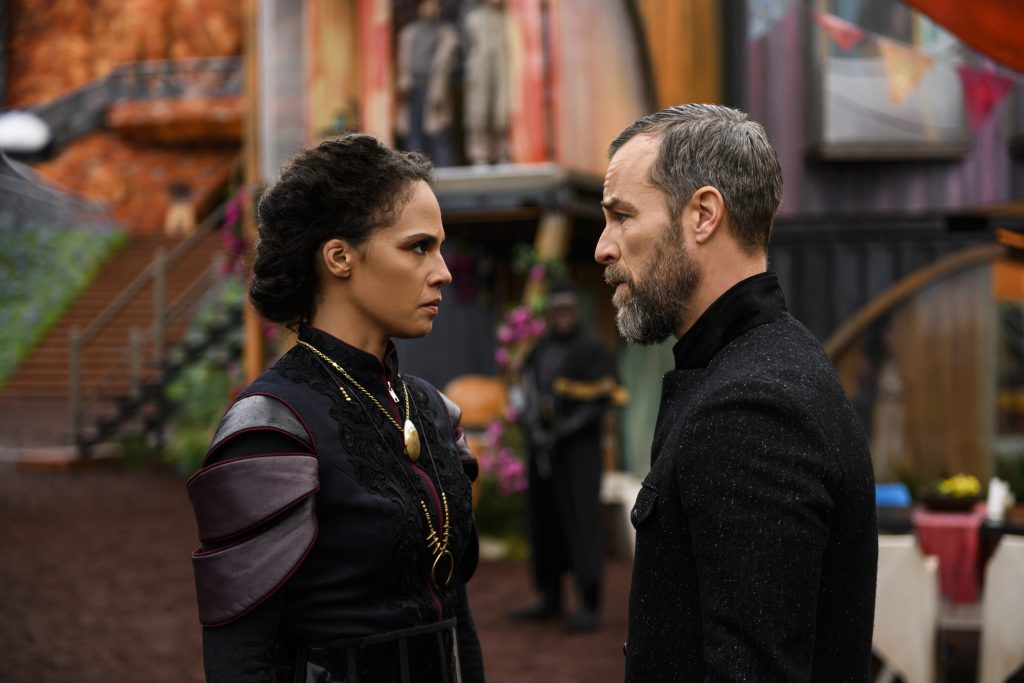 Then The 100 came around and decked his plans for nirvana.  Sorry Russell, but how long did you think that you would have kept the monstrosity going?

Murphy was the chosen one to die at first, but thanks to Russell’s irrational processing and traumatized grief, he sentences all of The 100 and Tai to die, with the exception of Madi.

To make the situation even more sinister and well, crazy, Russell chooses to have them burn at the stake. Before the burnings, Russell makes a grave speech.  It’s safe to say that everyone feels like they’re doomed. 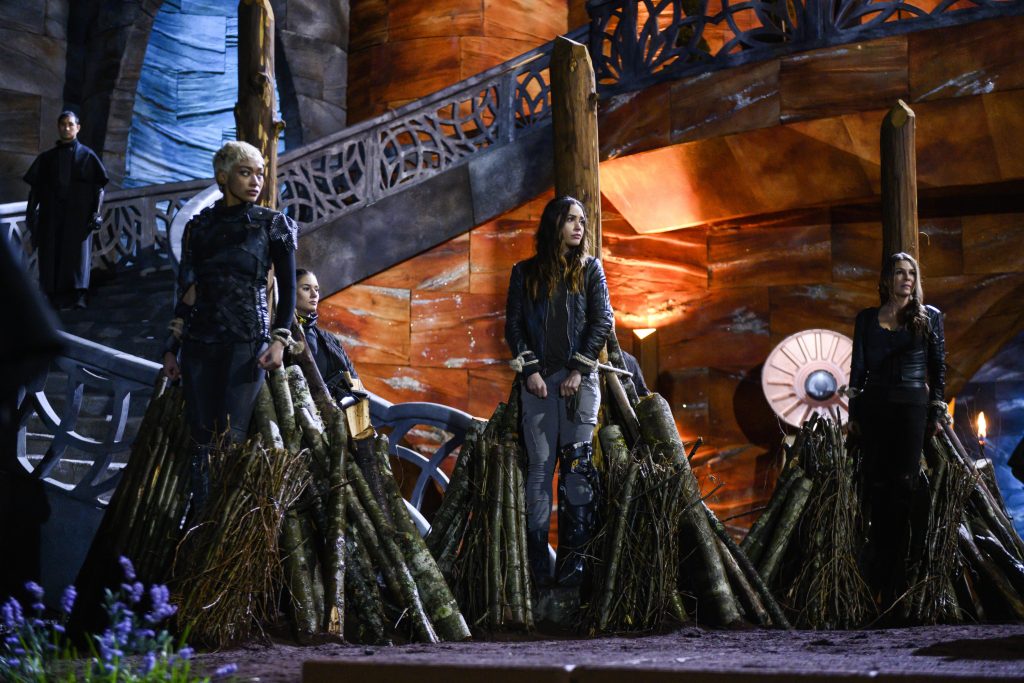 Seeing that her family is about to be burned alive, Echo attempts to assassinate Russell by an arrow, but just before she can arch, Ryker knocks her unconscious.  Prior, they were working together to rescue her people, but Ryker’s snap decision stopped her heroic act.

Echo has been rather downplayed this season, despite a few meaningful and poignant scenes.  It feels like when she has a chance to shine, it deteriorates, or it comes with a negative response.  She deserves so much more than to be underplayed, to have her own momentum outside a love interest, and sound off as her own individual.  She has had those dynamics in season 4 and season 5; it would be unfortunate to see her potential wasted.

Her moment may have not gone as hoped, but it didn’t eliminate her heroism. 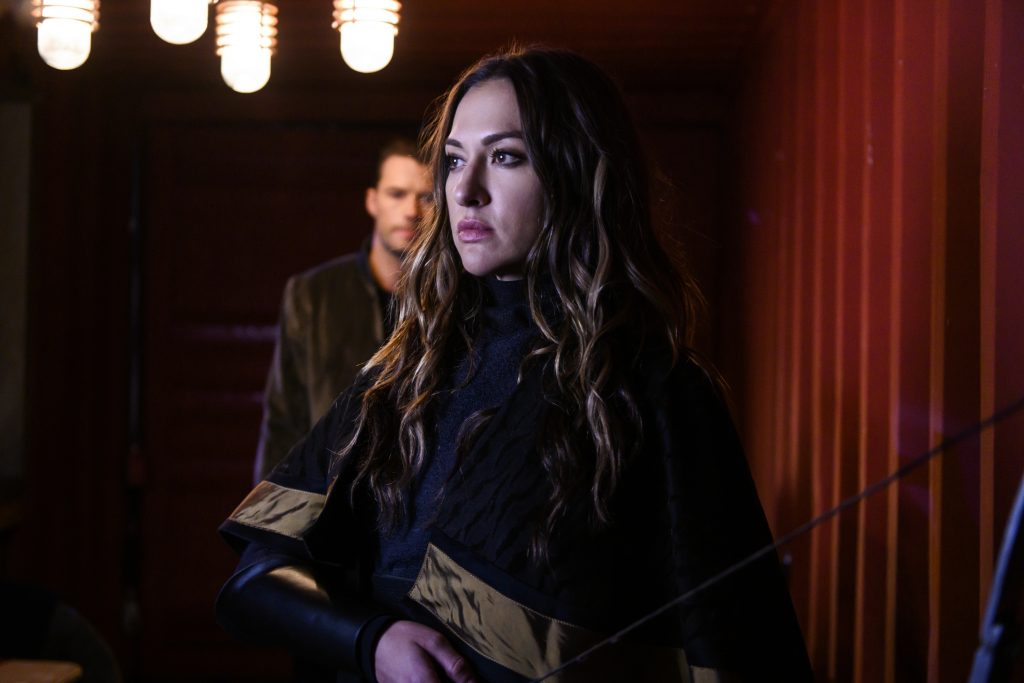 The witch trials are about to get real, but Murphy clicks in at the last minute, saying that Nightblood can be made through the bone marrow.

Abby confirms it, knocking out Russell’s disbelief and personal experience with bone marrow transplantation.  She says that the earlier Primes didn’t know the formula, thus the transplantations failing.

This will ultimately lead to Abby and Russell’s teamwork most likely, but I hate to see her go into another addictive state.  But there is always that initiative that she may go against the bad guy.

Clearing Out The Mind; Reviving the Heart

The Mind Deterioration of Clarke and Josephine is getting worse and there is very little time.  Clarke cleans out all the memories of Josephine so there can be a chance for both women to live.  During the cleaning, they come across the love story of Josephine and Gabriel.  These two were very much in love, and Josephine truly wanted to grow old with him.

She would never get that chance now because Bellamy, in pure desperation and persistence saved Clarke. 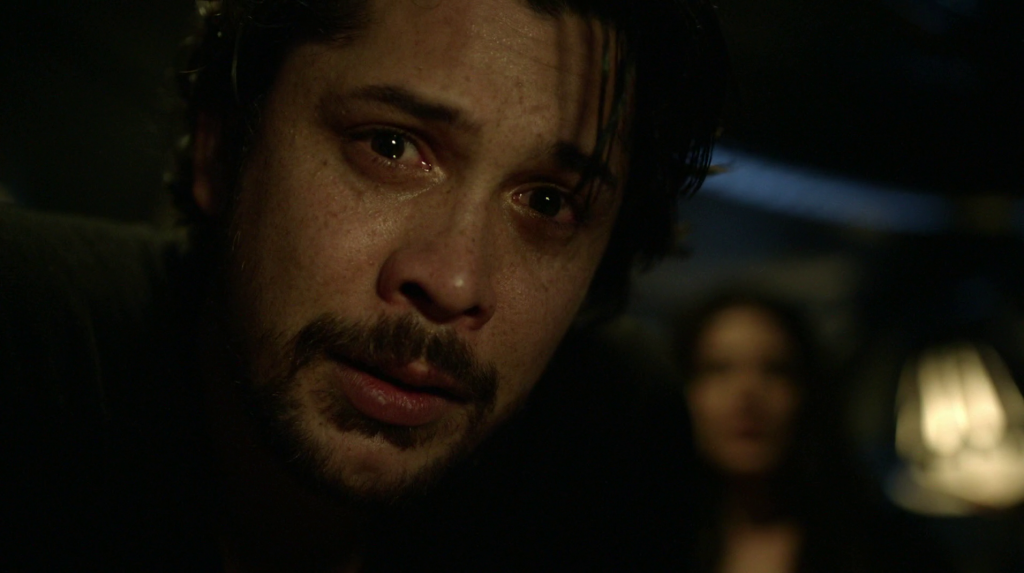 Let’s reverse a bit here.  Bellamy disguised himself as a Sanctum guard, possibly rode a motorcycle (squee), and risked his life to save Clarke.  He threatens Jade that if any of his people are killed, then Russell will not see his daughter again.

I’ve got to say that Bellamy is a pretty tough bargainer when it comes to protection terms.  His methods work on a constant level.

Now back to Bellamy saving Clarke.  After Gabriel and Octavia both said that she was gone, Bellamy didn’t give up.  He was like a man possessed, a man on fire as he performed some hard CPR.

Clarke must’ve had felt his passion through her heart because it reverberated her mind, allowing her to be alive, and killing Josephine.

She lives for the most important people in her life, and Bellamy bringing her back to life is the ultimate proof of that.  The heart cannot live without the head. 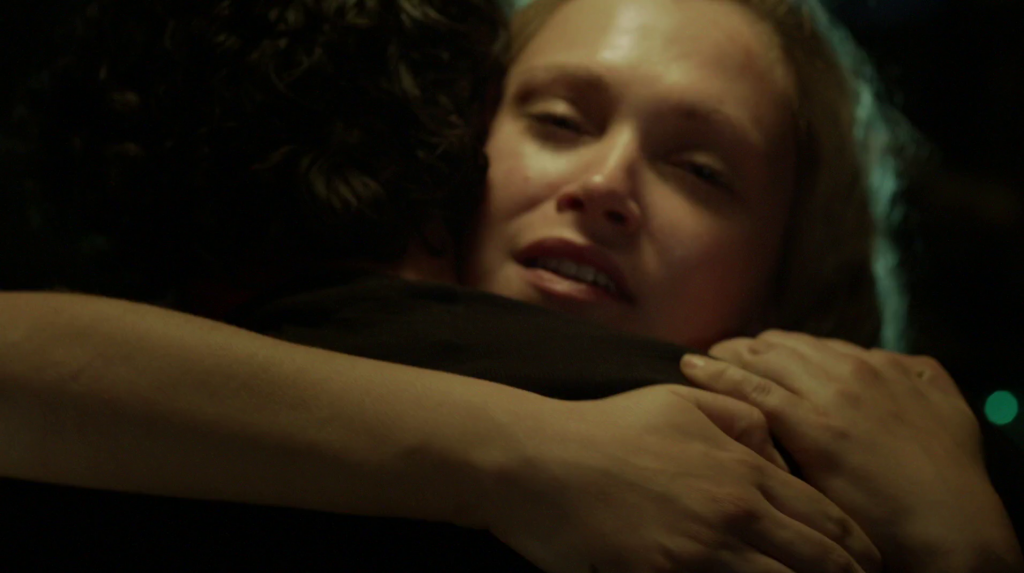 Bellamy and Clarke can’t exist without the other and their dual support.  Their support for one another is what keeps their souls going and working together so that their people can survive.

Then you got that hug: so filled with relief and hopes for a better future.

If these two were to become a couple, then they have all the potential set.  It’s transparent that they are soulmates and would make sense if a relationship develops. It would fit the story and add a dramatic, softer touch. 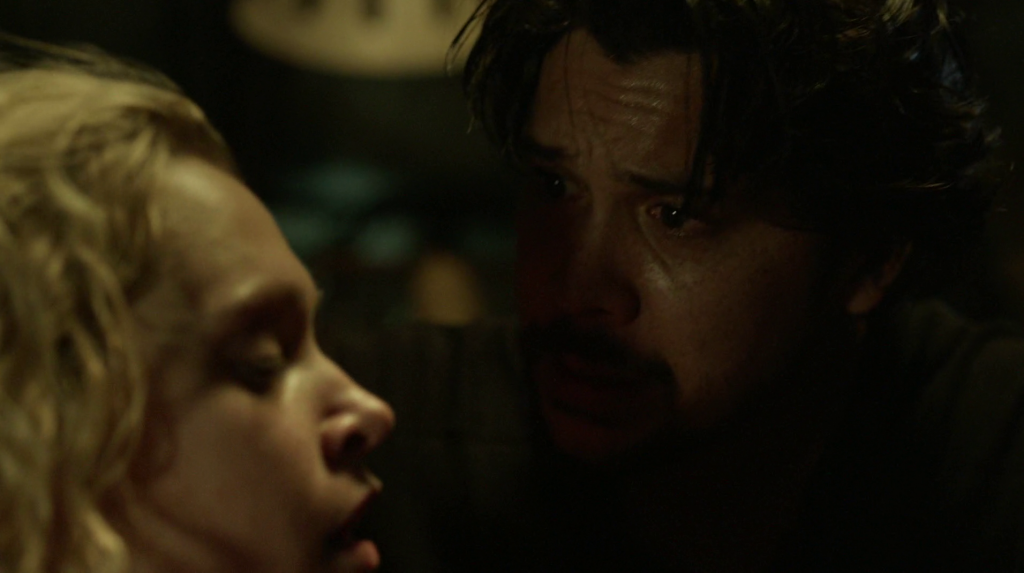 I may not be the largest Bellarke shipper, but I always did love their development and their chemistry together.  Those two always lit up the screen with remarkable talents and how they shape their own love story is through their eyes only.

I can see the entire Bellarke fandom squealing out in joy though because Bellarke is glorious.

We are only mere spectators, interpreting it in our own unique ways.  There is no wrong road to take it on because it always surmounts positively. 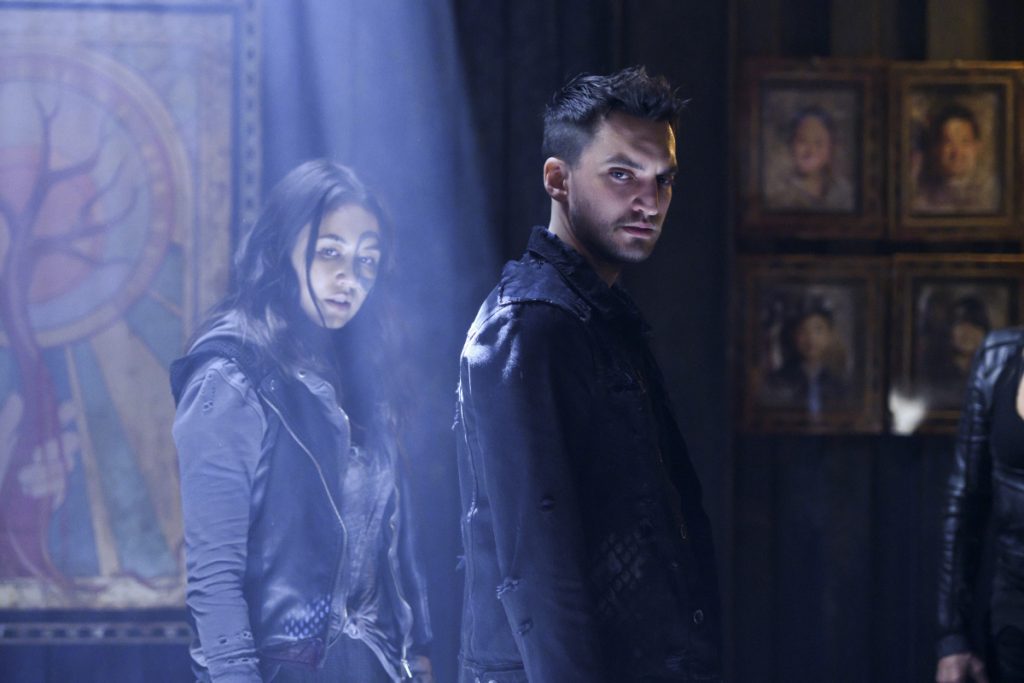 What did you enjoy about The 100 Matroshka?  Did the Bellarke *kiss* set your heart a’flame?   Did you think that Russell went too far with the recreation of the 1693 Salem Witch Trials?

On the next The 100 Ashes To Ashes, Bob Morley makes his directorial debut!

The 100 Ashes To Ashes Preview