The 100 Memento Mori was a solid episode.  While most shows dissolve and stray from its initial storyline in the middle of the season, the episode is the polar opposite.  Sewn with poignant emotional values and meaningful abundance, Memento Mori is one of season 6’s greatest. (Thus far)

Memento Mori is one of those episodes that binds you in.  Packed with emotional sequences, past season triggers, and amber that can reverse aging, there was no exclusion of processing.  Not only did Memento Mori challenged the mind, but it also torpedoed such powerful emotional responses and had a new overall feeling on how The 100 is viewed.

The loss of a friend is excruciating, especially when that friend is responsible for saving lives, and you have unbreakable bonds.  No one can ever replace them, no matter just how ‘passable’ an imitation.  Josephine continues to play her game and she successfully convinces Abby to make the Sanctum citizens Nightbloods.  She uses Abby’s weakness for Kane to seal the deal, but I am hoping that despite her affliction with Kane, she’ll realize that Clarke is gone and will raise hell to get her back. 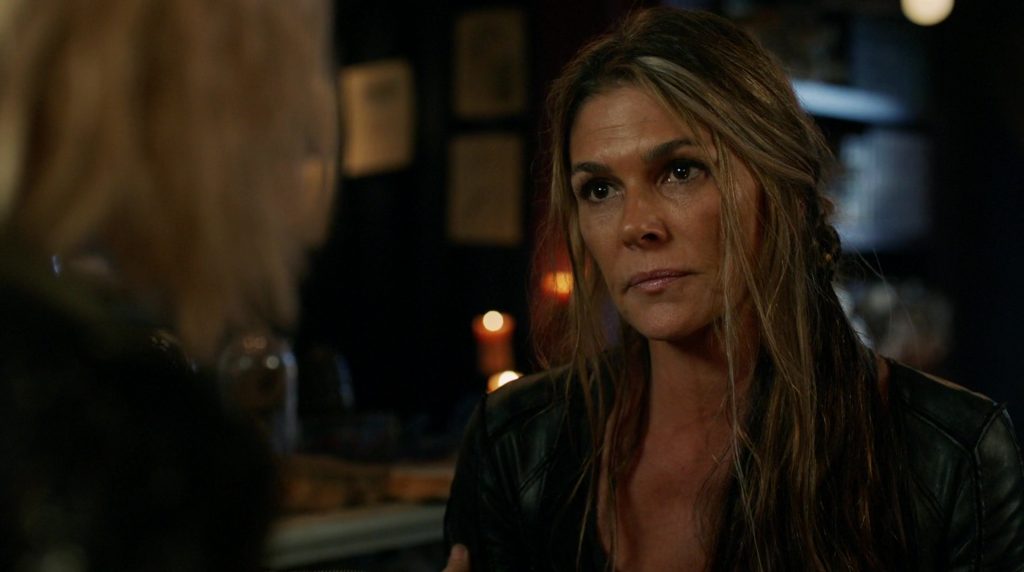 There was something off about that hug between them as Abby gave a shadow of doubt and question of where “Clarke” is coming from.  She knows that something’s amiss, but just can’t pinpoint it.

With gaining this information, Josephine skips to Soren, tells her that Abby’s hooked, and the Primes will be saved.  There’ll be no need for the breeding program as everyone will have Royal Blood with the addition of having first choice genetics.  With that, Soren deletes all the Primes’ mind drives, emphasizing the horrid proposal.

And you thought it couldn’t get any creepier.  Or technical.

The news of Clarke’s death reels in the mourning, causing Bellamy to shift back to “heart” mode.  He has the impulse to kill everyone in Sanctum and take their compound.  Murphy is just pretending that all is a-ok and that Bellamy should join him in on the plan.

Bellamy is smart enough to not follow that; it just gets him even more fueled.  This is Clarke we are talking about people!  So, of course, Bellamy will kill or attempt to kill anyone who endangers Clarke.  Not only was his attempt to murder Russell (Bell certainly has a choking kink), a prominent highlight in the episode, it was yet another example of his idolization and just how far Bellamy’s willing to go to protect her honor. 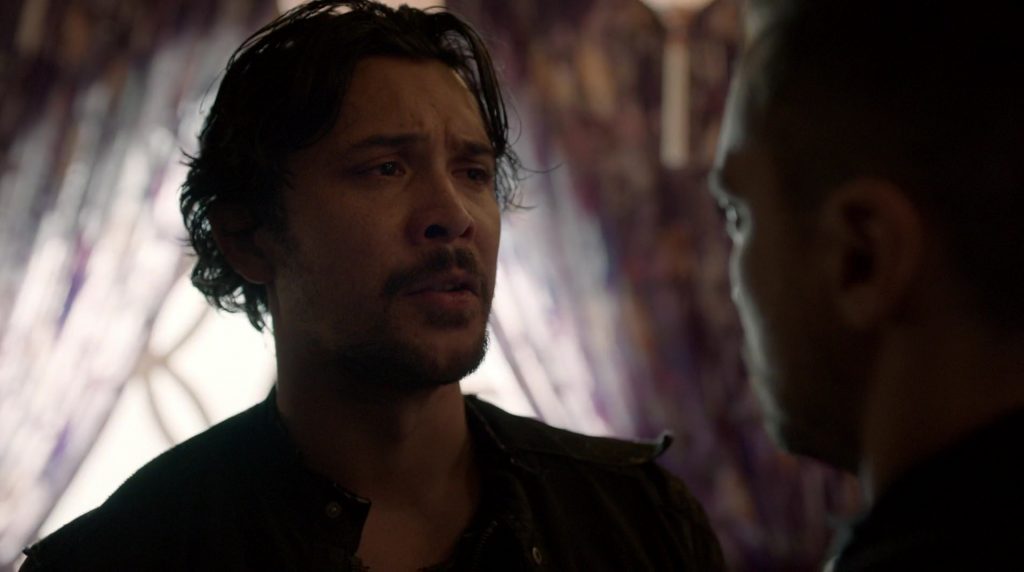 He stopped because Clarke wouldn’t want Bellamy to do that.  She would want him to do better.

While Spacekru grieved in the tavern, Bellamy grieves alone as he just wants to have peace within himself and remember Clarke for who she was.  It’s understandable because we all need that personal space to sort out our feelings and build ourselves up for the loss.

It’s never an easy task as we usually carry the heartache for the rest of our life’s journey.  With Bellamy, I think that he will structure himself again to be that better man and Clarke’s guidance will aide him through.

Madi will be the one who will adjust to the loss the hardest.  Clarke was her mother and confidante and no child should ever have their parents ripped away.  It was very heartbreaking to witness Madi’s grief; it was, even more, dropping to see Madi channel her grief in a very negative light.

Madi has finally come face-to-face with the dark commander, Sheidheda, of whom infests her mind on a horrifying level.  And during one of her sessions with Gaia.  It’s a complicated situation for both as Madi is traumatized and Gaia is trying to get her to perform the separation ritual that’s a risk in itself.

Summoning the other commanders, including Becca Pramheda to stop Sheidheda from poisoning Madi’s mind and saving the Flame will be no easy task.

The Dark commander led his people towards hell and even he killed his advisor.  He tells Madi to follow his force and will teach her his ways. 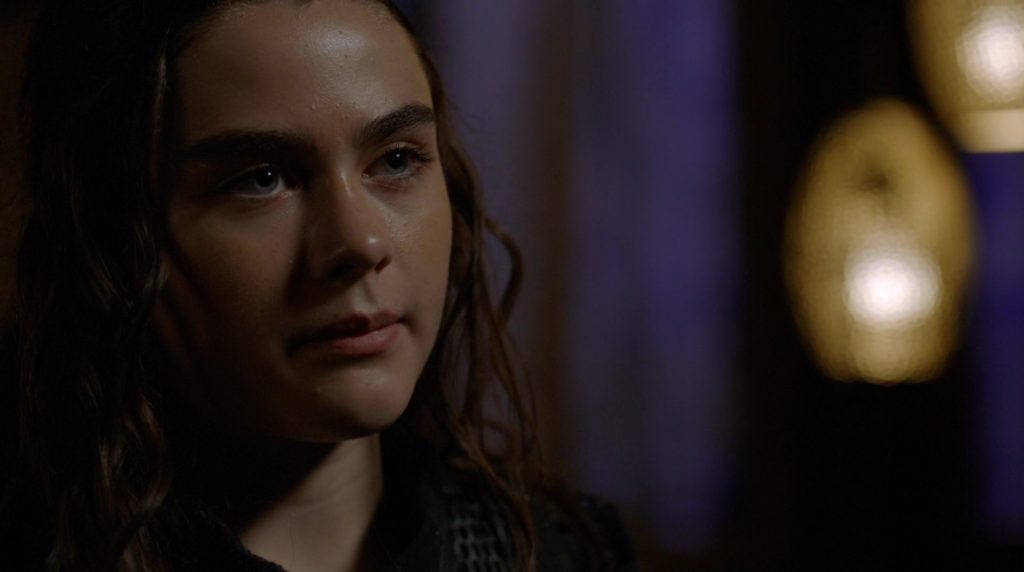 A huge key role that made Madi decide to side with him and banish Gaia is her grief; her loss of mother hits her hard, and I believe she is taking matters heart-wise as her head is clouded and cannot make a concrete decision.  It’s every child’s worst fear to lose a parent so young and every memory comes flashing back.

Another aspect is that Madi is becoming her own person (Teenagers. Am I right?) and being influenced by negative noise.  She’s vulnerable, confused, and feeling unlinked, despite the offering of help from the others.

However, Madi has almost made a grave mistake in the season 5 finale when she considered murdering the Eligius prisoners for stealing her home, so the impulse to act irrationally out of pain rose.

“Tell me how to kill them all,” Madi says coldly.

Yikes.  I just hope Bellamy will talk her out this crazy situation.  Otherwise, it will not end well.

Another Walk In The Woods

Outside the chaos of Sanctum, chaos ensues within the woods.  Echo goes after Bellamy who is supposedly on a scouting mission.  By which we all know is just a lie from Josephine, who will do anything to keep Sanctum’s secret safe.

Echo is still suspicious of it though and she has every reason to.  Bellamy without her?  That’s very unlikely as the two of them were always together in the forest.  It felt like their thing.

Well anyways, Echo notices that Jade followed her, and she is livid.  Girl, I would be too because I would be freaked out.  Naturally, her first thought merges to Bellamy and threatens Jade with the death of her master if he is dead.  Luckily, for Jade, he isn’t, but Echo is faced with the grim reality that Clarke’s gone and her heart just crashes. 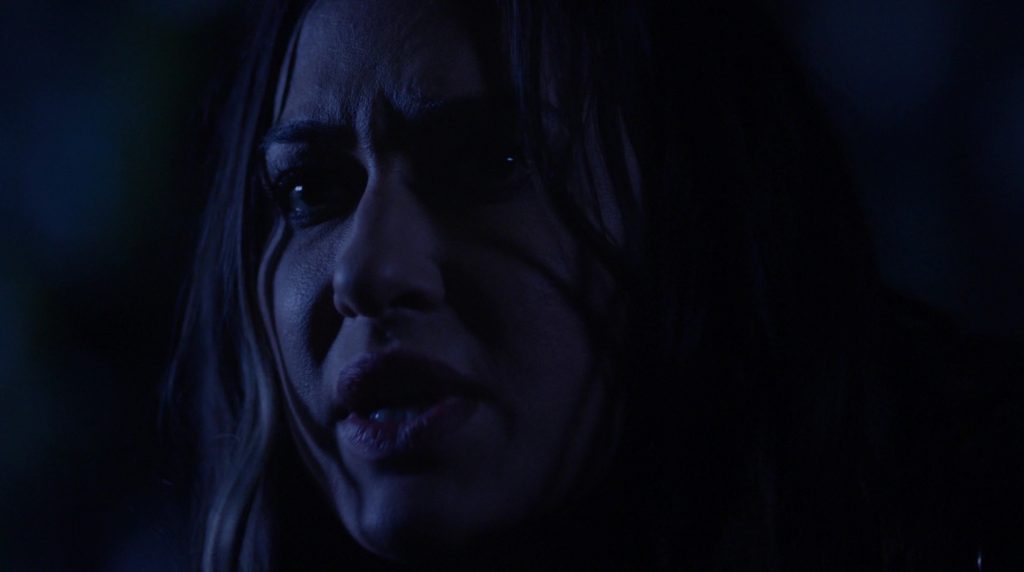 While many people may view Echo as cold, she did mercy killed a young guy who was tangled in the tree vines.  It was probably a hard decision for her, but that is what he wanted:  to be free of the agony.

So, her trip wasn’t at all wasted because we have seen a raw and moving side to Echo without her beau at her side.

Catching up with Octavia and Diyoza, they are with Xavier, who may have found a way to heal and reverse Octavia’s aged hand.  Going with Diyoza earlier, who still has major discomforts about this guy.  Yet, she is impressed with the healing power of the tree sap as it quickly erases her cut.

For Octavia, her wound is a bit more advanced, so the sap fails.  But not all hope is lost as her hand moves involuntarily, which piques Xavier’s curiosity.  As an experiment, he gives Octavia a writing tool, her hand making the logarithmic spiral, the symbol of the anomaly.  It matches the tattoo on his chest along with holding a resemblance to the sketches in Diyoza’s notebook. 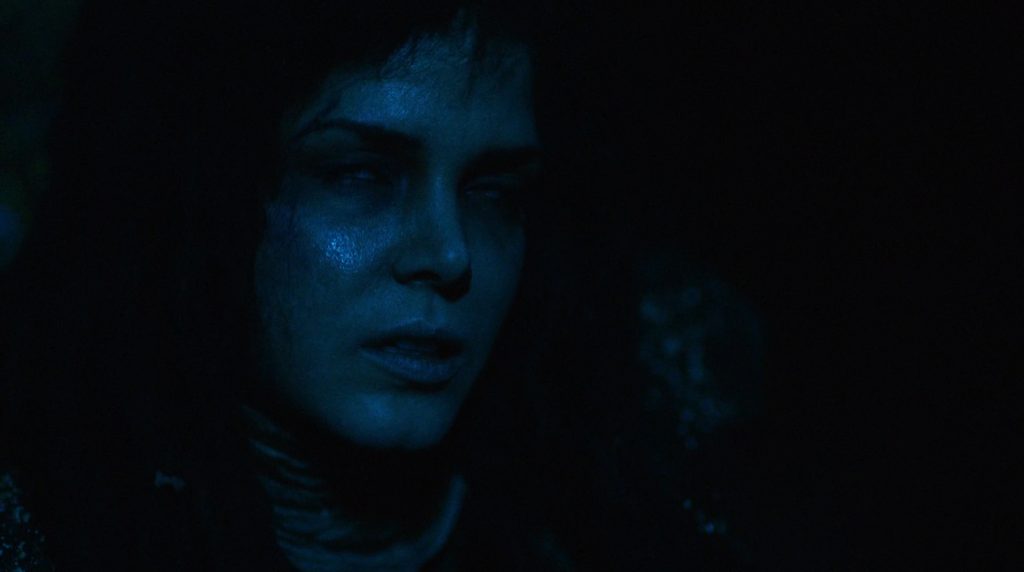 The reason?  The anomaly is calling out to Octavia to be a part of its world.  Maybe that her purpose is to try to be a better leader for the Children of Gabriel than Blodreina of Wonkru.  This could very well be her only chance at redemption.

In the previous episode, The Gospel of Josephine, Octavia had a wakeup call.  She wanted to live instead of dying.

But will she grasp at this chance to start over?  Or will she drown in her own blood?

Killing Clarke Griffin will be killing The 100.  The 100 and its characters cannot function without the star protagonist and that is a fact.  It’s not The 100 without Clarke Griffin.

Josephine has a horrible imitation of Clarke and it shows.  Is Clarke’s conscience trying to fight back against this evil body snatcher because she still has marks to make?  And her life to live?

Yes!  Which can only mean, Clarke Griffin ain’t dead bitches! 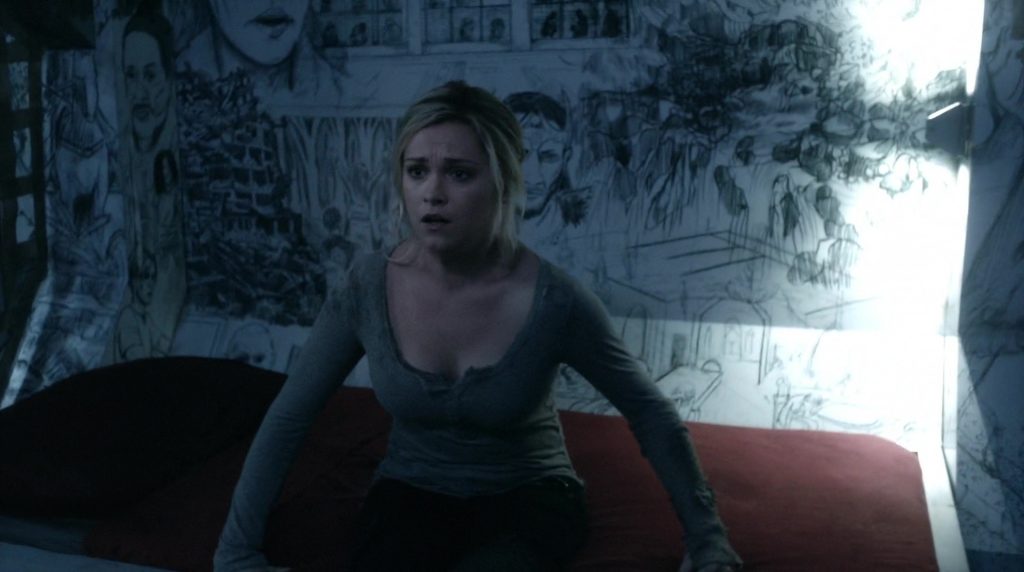 After seemingly of having an excellent day of manipulations, getting jealous over Memori, and making Bellamy cry (don’t do that!) Josephine sips some tea, pops an Anacin, and snuggles into bed.  A perfect ending to a seemingly perfect day.

Or so Josephine believes.  Clarke is ready to burst out as she probably witnessed the trouble Josephine caused from the deep recesses of her mind and spirit.  If there is one thing about Clarke:  You do not mess with her.

In a dream-like sequence, Clarke is back inside her season one cell, touching her drawings and everything comes rushing back to her.  The camera shifts over Lexa, then Bellamy, reflecting that these two people made the largest impact in her life.

Clarke resonates what life is about; her never-ending quest to sacrifice, survive, and save others.  She is a person not defined by labels such as LGBT, mom, daughter, friend, or lover, but defined as a person, willing to breathe so that she can be the prime example of “do better.”

And Clarke Griffin will go into battle to keep that quest alive. 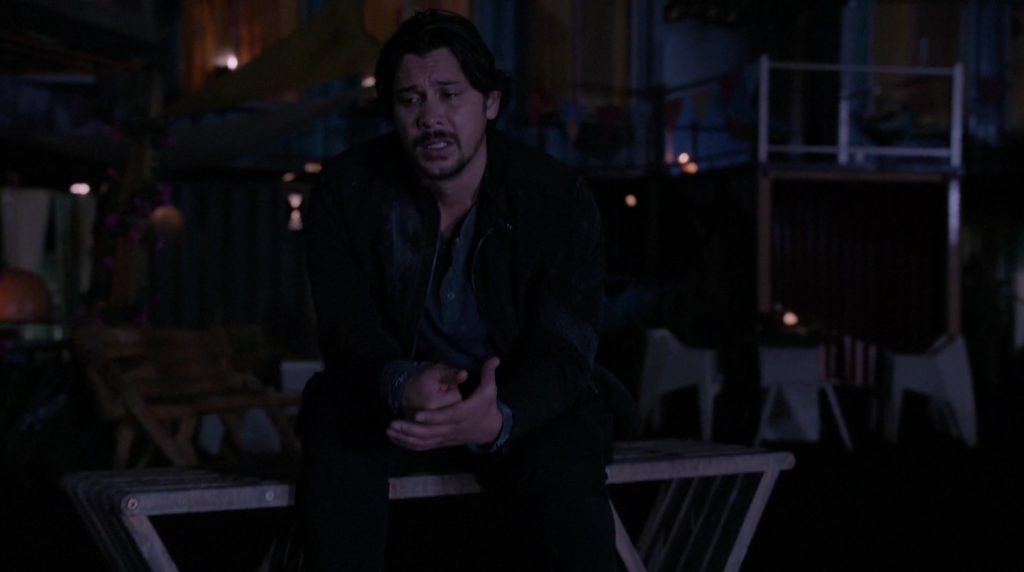 What did you think about Memento Mori?  How do you feel about Bellamy grieving alone as compared to grieving with his family?  Do you think Octavia and Diyoza will join Xavier in the Anomaly?