The popular vinyl toy line has announced that they will be releasing The 100 characters.  About time!

At the London Toy Fair January 23rd, Funko revealed the plans to debut six major The 100 characters into their Television Pop! line.  Included are Clarke Griffin,  Bellamy Blake, Octavia Blake, Raven Reyes, Lincoln, and Lexa.  Below are the character designs. 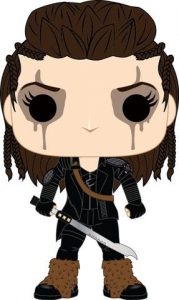 The 100 Funko Pop! figures will be available sometime in 2017.  These will be awesome for future prizes! ?