Conageddon Jigs Back Into Boston

What a glorious weekend Conageddon was!  Held at the Hilton Boston Logan Hotel, the intimate event, Conageddon, delivered and pulled all of the stops for the most memorable and personable The 100 con experience.  Brain-childed by Bob Morley, Eliza Taylor, and Zach McGowan, and pieced together by their talent manager, Mike Gillespie, Conageddon was truly a masterwork that offered informational (and interesting) panels, fun photo ops, the ultimate VIP experience, and much more.  There were memories in the making that fans will reflect back in years to come, and it is all thanks to the incredible and passionate The 100 cast and the Conageddon team.  The best part?  It’s coming back in 2020!

A Way To Celebrate All Things The 100

We all think of St. Patrick’s Day as a fun holiday to drink and do a few Irish jigs.   Yet, adding a The 100 event to the day was a pretty sweet way to add in the celebration.  Being press for the second year in a row, (hoping for a third) I was marveled by yet again, all of the positive and supporting outreach between both cast and fans.  When you attend this particular convention, you will capture the lightness and positivity through it all. 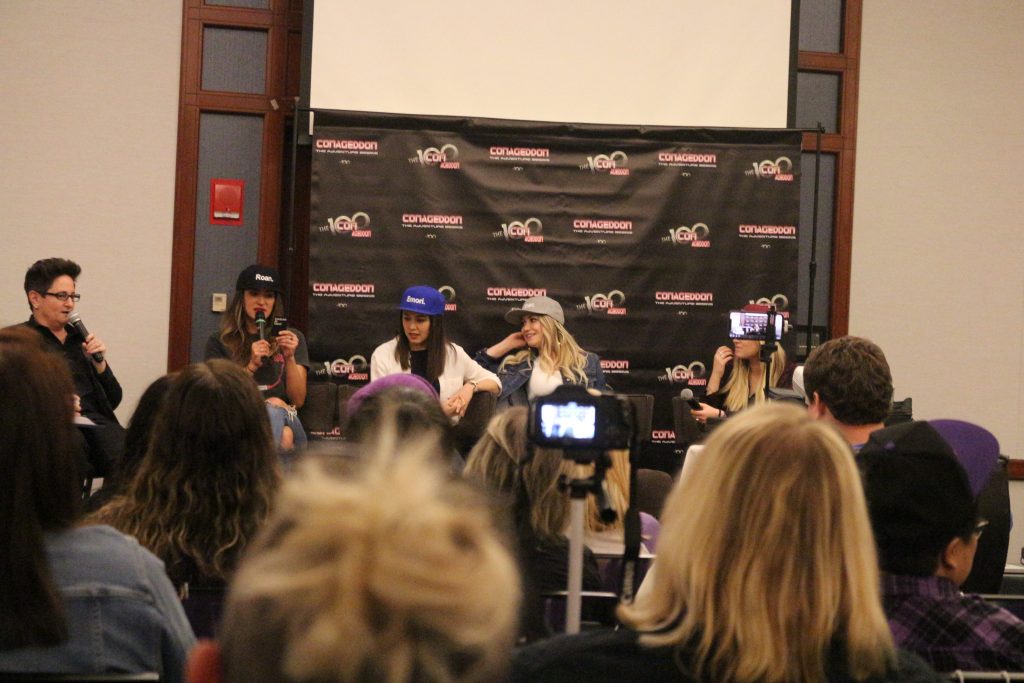 Conageddon 2 took place during the festive St. Patrick’s Day weekend March 16th-17th, 2019.  While there wasn’t much discussion regarding season 6, the cast did open up about Bob’s directing, favorite moments, and character inspirations.

One of the more fun events that took place was the beer pong game Friday night.  It was Bobby and Eliza vs. Richard and Luisa for the ultimate championship.  Of course, there was no actual prize being given, but it was the grand spirit that made it enjoyable and energizing. 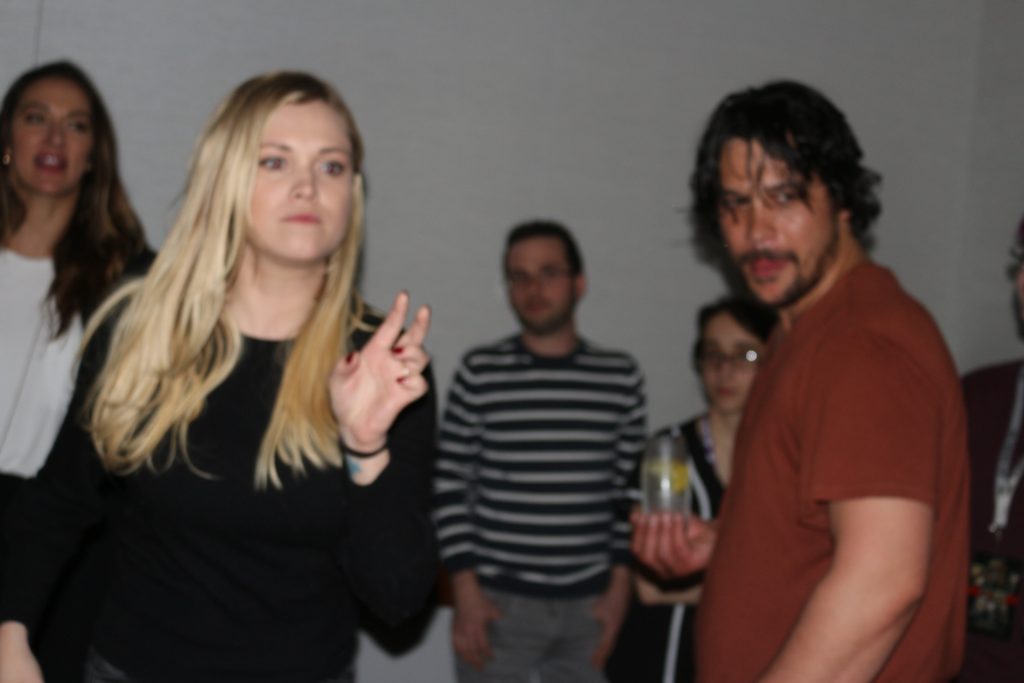 Besides, what’s a party without a few drinking games?

Following the convention tradition, Saturday was filled with in-depth panels, moderated by the lovely Jo Garfein.  Eliza shared that her biggest and most challenging acting role is yet to come.   Her talent exceeds when presented with challenges because it molds her craft and transports her into a new and creative dimension. She is the essence of working with her fullest potential and the results being developed onscreen is truly rewarding in multiple facets: the audience, the witnessing costars, and Eliza herself.

Another insight into the marvelous weekend was Bobby speaking about his directorial debut!  He enrolled in a workshop from Warner Bros. to learn all of the techniques when it came to working behind the cameras, as opposed to in front.  Everyone said that he has done a great job in the process; telling his side of the story. 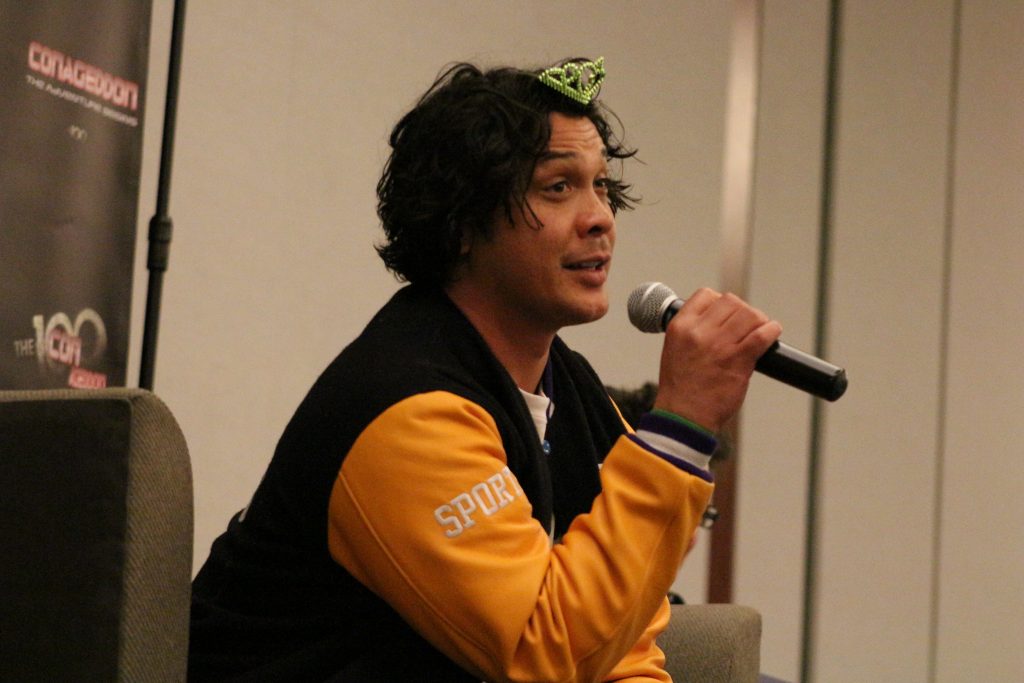 *His side was eloquently and remarkably told.

Exclusive to the con was the Beliza/Bellarke panel.  Fans came forward with questions regarding Bellamy and Clarke’s chemistry, development and what’s to come.  Yet, the chemistry between Bob and Eliza is very apparent offscreen (did I mention that these two are married?*) because being together for their own con came naturally for them. For the photo op lovers, Froggy’s Photos took delicate care of capturing the special moments with the cast and fans.  Both parties enjoyed one another’s exuberant company as they modeled in fun poses and reenacted scenes from the show.

If a fan was lucky enough to score an ultimate VIP pass, then they got to share an exclusive and personal time with their favorites and fellow fans within the group!  There was a photo op with everyone and a breakfast meet and greet.   With how friendly and down-to-earth The 100 cast is, it’s an emotional gift.

Congeddon was all of that all weekend long.  There was no stop to the party because Zach McGowan wouldn’t allow it.  He is the ultimate Con king and he’ll just pull you in. Scary?  No?  Fun and encouraging with a dab of spirit?  Absolutely.

To put it simply, the event has become a joyous and momentous occasion for me because I got to be surrounded by such a grand and love-affluent atmosphere.

#1:  You can now check out our exclusive photos from Conageddon 2018.  These are unedited, unfiltered, and free for you to use!  Get crazy, creative, use them as social media memes, edits, and whatever else floats your boat.

#2: If you are still excited over my happy cup-runneth over about this con, then you are in for a real treat!  Conageddon or #Conag3ddon will be returning for its third installment April 3rd-5th in Boston!   The dates had to be pushed back due to filming the seventh season. The guests will reflect the same as mentioned above, with a few newbies (is this 2004 again?) joining in.  Sachin Sahel, Jarod Joseph, and the ever sweet Christopher Larkin will be blasting up the volume even higher.

While Chris may be gone from the series, he certainly was not forgotten.

Passes including VIP and general admission will be available for purchase this upcoming Friday, August 23rd at 5 EST/4 CST.   Head over to conageddon.com for even more details and give them a follow on their Twitter  You’ll be glad that you did!  Also, when you book at the Hilton, there is a reduced rate special just for the con!  How cool is that?!

*=Updated since the original post.  Also, this was published back in April, but due to a system error, it wasn’t viewable. I hate technology.*