The 100 Sleeping Giants gave us all that much needed reunion and then some.  It had energy, emotion, and the line of moral.  Read my recap-review of Sleeping Giants to relive the moment!

Sleeping Giants felt and embodied a genuine The 100 episode-amplified a thousand times.  It delivered powerful and emotional storytelling, while remaining traditional to The 100’s elements.  It was proof of visionary artistry, thanks to director Tim Scanlan who brought the written imagination of Aaron Ginsburg and Wade McIntyre to life.

It carried out its promise of an emotional and wonderfully done (and much awaited) Bellarke reunion.

“She must be pretty important to you.”

Two simple lines is all that it took to create one of the finest reunions in television history.  I cannot even process how significant this was and how far Bellamy and Clarke came to be at this point.  They are clearly and truly the anchor and center of the show, and one of-if not the best relationships developed on current TV.  What is unique and amazing about the Bellamy/Clarke chemistry is that they’re not even romantic, and yet, my heart accelerates.  But, that is fine by me because what they have (I cannot even label it) works and is as beautiful as romance.  If they ever do hit the relationship status-and it’s a strong if, then it would be based on mutual trust and understanding of one another, along with shared experiences and care.  Bellamy and Clarke symbolize the head and the heart and Sleeping Giants took that and really harmonized them.  You truly cannot get any better or much more real than that. 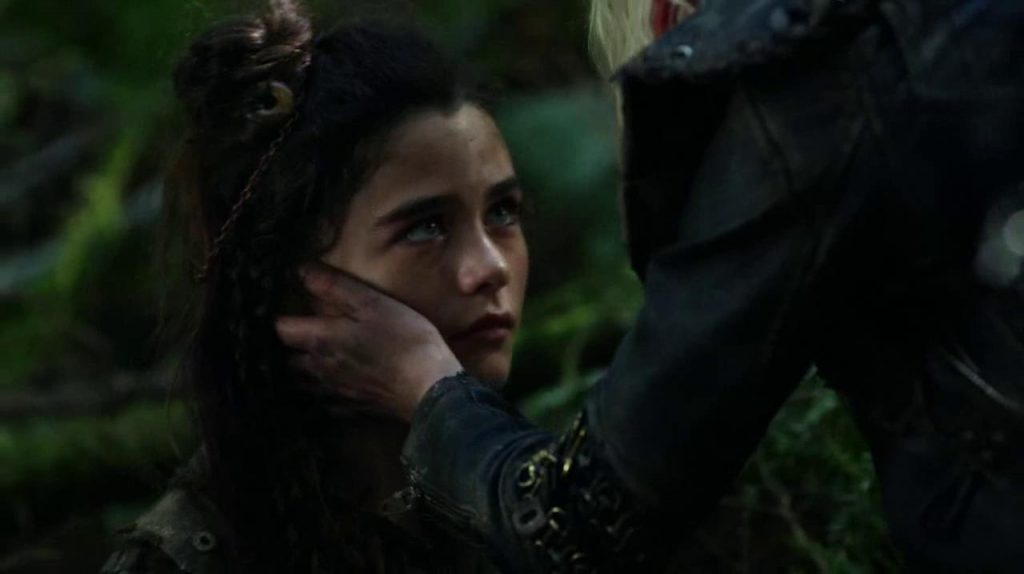 And there were the events that were leading us to that one incredible scene.

Eden told the story of what our people have done during the aftermath of Praimfaya.  Spacekru became a family understandably, Clarke adopted Madi, Eligius landed and frightened the hell out of everyone, and a reigning Octavia watched a gladiator fight.  It was the perfect premiere episode.

Sleeping Giants takes off where Eden ended, so there was an instant connection.  Like Eden, it was bursting with action, and the difficult choices our heroes-and villains came face-to-face with.   There was also some hidden redemption and the borderline of morality.

The stimulating conceptions of the Eligius prisoners lays more than their criminal backgrounds and ferocity.  Charmaine, for example is cold, cruel, calculating, and ruthless, but she is also a tough negotiator.   She is also not afraid to kill her own, and when you do that act, it screams psychopath.  Is Charmaine one?  Too early to tell, but considering what was witnessed so far, there is strong possibility.   We discovered that she was a navy seal before the first apocalypse, and using her training, she was able to successfully control and coerce her soldiers, as well as Clarke.  Which brings me to my next speculation of this lewd lady.  She knew Clarke’s vulnerabilities and way of thinking, and crafted manipulation to gain information about what happened to earth and if there are any more of her people.

And the outcome of Clarke’s history lesson is hilarious, if not dark on its own level.

Zeke Shaw was a primary example of the “golden boy” before his journey into the space mining field.  He was not convicted of any crime or felony; thus, he is not a prisoner.  He volunteered to join the mission to explore the depths of the universe and seek adventure.  Zeke, out of all the Eligius crew is the only one who offers kindness and sympathy towards Clarke and could level with Charmaine.  It is palpable that he does not want to have anything to do with the prisoners-but he must, otherwise he’d be killed. 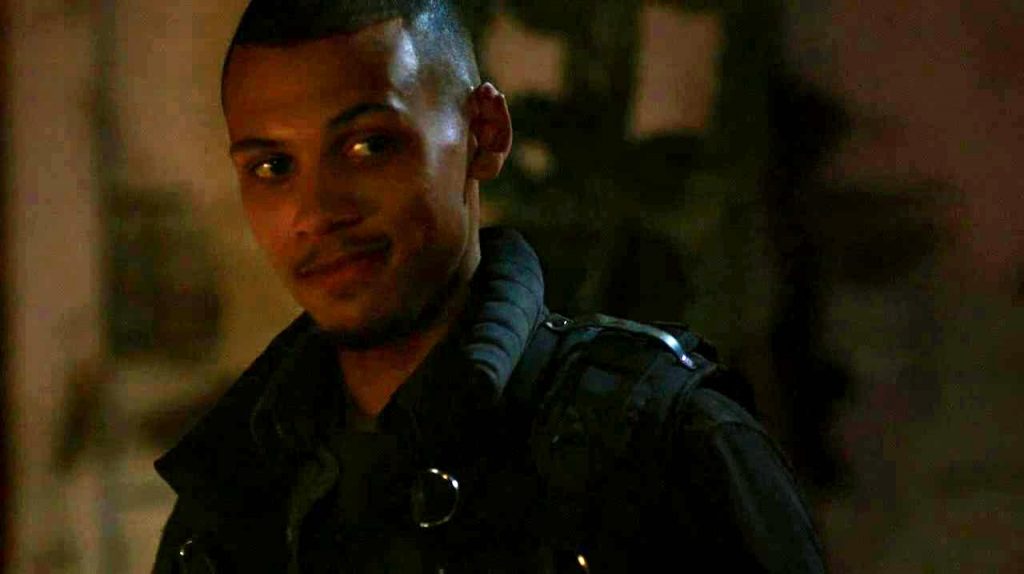 I find Zeke the least predictable of Charmaine’s gang because all the other so far have shown what they’re capable of and with Zeke, I feel like his whole multitude was not fully revealed.  What are his true motives, other than exploring?  And why is working for Charmaine if he is not particularly fond of her?  I know that she needed a navigator, but surely there must have been others with the same expertise and qualifications.  Hopefully, these questions will be scoped and have logical explanations as the season continues.

We get that the others are dangerous criminals, but why are they this way?  What imbalanced these people that they must go to such lengths?   This is one of the reasons why The 100 has such depth and dimension.  We can allow ourselves to  have empathy with the bad guys, while hating them.

Moving Onto Spacekru For the Moment

I love an awesome Spacekru adventure, and theirs really held down Sleeping Giants.  In fact, what we have seen how they harmonized and interacted together in the season premiere, and really became a family unit.  Despite a few circumstances, and no, it is not about a certain relationship.  In the third episode, Emori, Raven, Echo, and Harper formed a sisterhood, and it’s delightful because they watch out for one another and are each other’s support systems.

Emori was reeling from the pressures of being Raven’s second, but after encouragement from Raven, Emori leads the gang back to the ground successfully.  Harper also gives her thoughtful input on to her on the painful breakup and suggests that Murphy deserves a second chance.  And the thing about that is that he knows that he is solely responsible and feeling its wrath.  In the beginning, Murphy would not have given a damn about relationships, and their repercussions.  Over the seasons, Murphy has developed humane and sincerity in his character foundation and has become a greater staple to the storyline.    It was proven in Sleeping Giants when he stayed behind with Raven to keep her company.  Hmm, I wonder if he would have stayed behind if Raven didn’t lie.  Hopefully, by the end of episode thirteen, he and Emori will be back together.  If they survive that is. 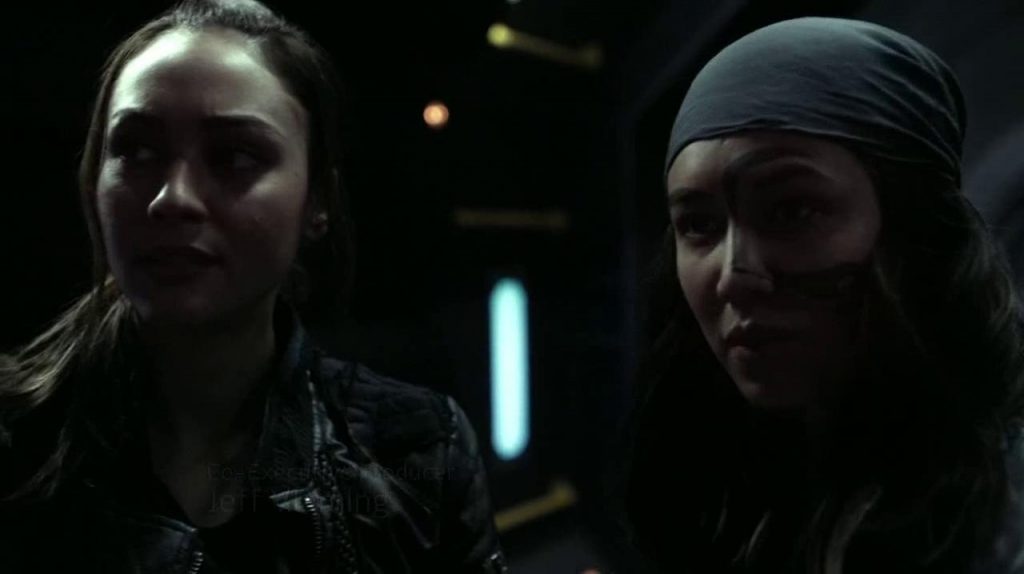 Speaking of character crafting and growth, Echo has shown a vivid contrast from her days from Azgeda.  She displayed quite the wave of devotion and honor for her new faction as she saved Bellamy and Raven from one of the awaken prisoners.  Yet, I wonder if her actions were a degree of transference as it possessed the old rigor of her warrior identity.  Echo may have left her old clan, but a small portion of her old life will always be instilled her.  But, she is trying to let go of it by making herself better and useful.  Which focuses back on character redemption and build. 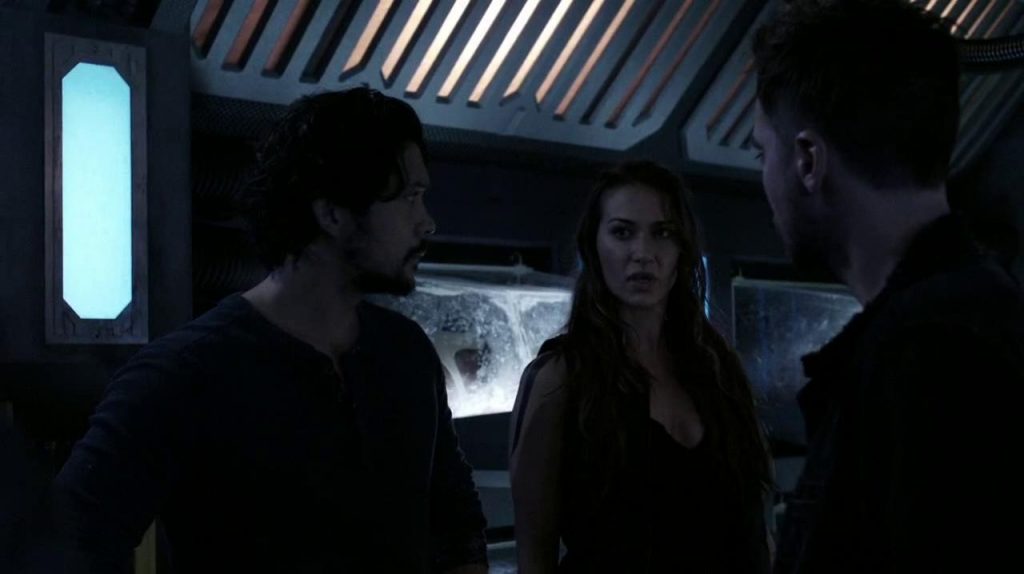 The line of morality runs profoundly as Bellamy questions of whether to kill the sleeping prisoners on the ship.  Even though that these people done horrific crimes, Bellamy doesn’t want to cross that path again of murdering hundreds.  Raven concocts a plan that will block the signal to the ground, so the prisoners will still be inactive, and will rig the system to kill them off slowly if Charmaine doesn’t listen.

In the same measure, Madi questions if making the first shot is the right thing to do, as once again, she is placed in a predicament with Eligius.  This tells us that she has major discomforts with Clarke’s methods, and has a tender heart.  Yet, Clarke firing at the prisoners amplifies her survival challenges and creates a whole new spectrum.  It also indicates that Clarke will stop at nothing for Madi’s life-no matter how dark and inhumane the resolution will be.  In the past, she would have tried to reason with the threat like she had done in season one with Anya, and season two with Cage.  But now, there will be no reasoning firsthand and that is because she has a new way of life, and there are no lines  that she will not cross in order to keep it.  Hey, you don’t mess with fierce Mama Bear Clarke!

All the while, Spacekru hears that there is life on earth, but are confused by it.  Which makes it even more important to get back on the ground.  If only they knew who is waiting for them (him) on the other side!

About that long-awaited reunion.  Bellamy is all in perplexity and shock when Madi seeks him out right after they landed.  He hasn’t a clue of why this kid is there, but he follows her after she tell him that Clarke knew that he’d come. The expression on his face is of disbelief and relief when he sees Clarke for the first time in over six years!  Six freakin’ years! 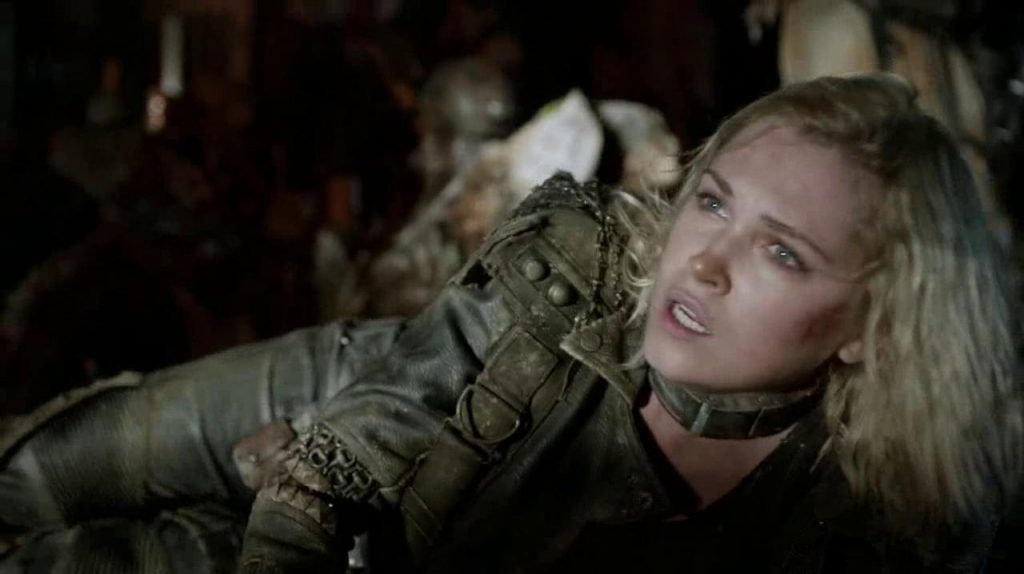 But getting to Clarke won’t be as easy as saying “I won’t let anything happen to Clarke. I promise,” to Madi as she drove him to her.  Charmiane and her crew are having a bit of enjoyment torturing Clarke with a shock collar, which peeled another morbid layer: sadism.  When you thought that The 100 could not step any more bounds, they take it over the edge yet again.  I believe that adding this element and context made the scene much more poignant and surreal.  What does Bellamy do in exchange for Clarke’s life?  He bargains with Charmaine-283 will die (Charmaine’s people) if they don’t hand over Clarke.  And he does it all with a simple object, a coffee mug that he found on the Gagarin ship.  It definitely emphasized the situation.

Of course, there is the cliffhanger, so we don’t know Clarke’s faith just yet, or whether Bellamy’s negotiation worked.  We just have to find out in the next episode, Pandora’s Box. 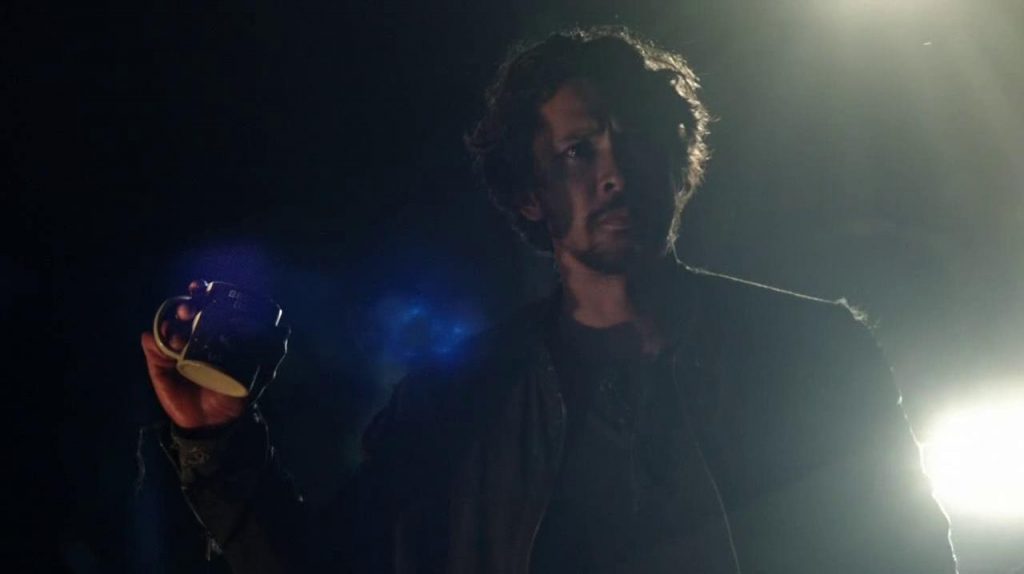 What did you think of Sleeping Giants?  Let us know!

Final Ratings For The 100 Sleeping Giants