Eliza Taylor And Her Birthday Project

October 24th is the Brave Princess’s birthday, and Grounders Source has invited The 100 fandom (Or Eliza fans), to be a very special part of it!  As any The 100 fan knows, Eliza Taylor portrays the strong, compassionate, and self-sacrificing Clarke Griffin.  In reality, though, Eliza is her own shining example of making life about just more than surviving.

On Sunday evening, October 1st, Kass Morgan, New York bestselling author of The 100 books (which is now a hit series on the CW Network) will be doing a live session with The Pixel Project.

With The 100 season four DVD dropping this Tuesday, July 18th, Grounders Source will celebrate the occasion wholeheartedly.  What better event to do just that?

As you all know, Eliza Taylor’s (Clarke Griffin) 27th birthday is just around the corner.  At Grounders Source, I’d not only think of this as a news site but also trying to get the fandom involved as well.  This project will exemplify just that. 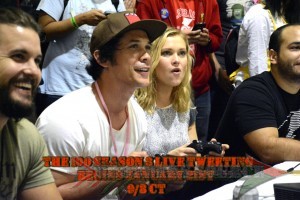 o days from the much anticipated premiere of The 100‘s third season, social media has been ABUZZ with fan and cast frenzy.  It will only elevate when Thursday night comes around, and many more after the 21st.

Layne Morgan, the PA for The 100, has posted the cast and writers’ Twitter handles so that people can easily follow and initiate.

I have the handles here, in case anyone missed it.

THE 100 SEASON THREE TRAILER HAS LANDED!

*Takes a very deep breath*  Okay, I am calm and ready to recap.  Oh, my God.  Just, oh my God.  Can you believe this?  Today, the brand new The 100 season three trailer has fallen, and it has already created a wave of excited media frenzy.  It has beaten out Star Wars on Twitter!  Yes, Star Wars!   And, I happen to be a Star Wars freak, but I could not help but feel over ecstatic!  Who would have thought?  Well, anyways, I am going to write the recap, and lastly,  the plane wreckage of my emotions.

The trailer as you can see, is quite graphic and gruesome.   Lexa is indeed back, and it appears that she and Clarke are once again allies. Bellamy is over distraught and guilt ridden over what had happened at  Mount Weather.  Yet, it looks like he is at his own personal war with his sister, as she pummels him in the end.  Although I do not approve, she is a strong little thing.  Then, you got that huge guard, trying to take over the camp like he is God, and if anyone dares to disobey or revolt against his ‘laws,’ then the answer will be death.  Ohhh, rough.  Poor Raven is being experimented on, and for what, I do not know, but please, leave that poor girl along already!  I can’t stand to watch her being tortured!  Now, Abby and Kane finally share a kiss together, and it is like the only light in the dark cyclone.  Hey, it cannot not all be death and destruction right?  Jaha is finding out what has caused the apocalypse with A.L.I.E, and Murphy is reunited with Emori.  There is a sex scene thrown in there for good measure, and I think it is a split of two different affairs. One of the lovers though is Clarke.   Ah, my heart has definitely died, and that is a very good thing in this case!

Those were some of the few key highlights, and my emotions and my mind are seriously gone.  Boom!  Gone.  You tried to mentally prep your body for something like this, but in reality, it does not work.  The scene that got me the most though is the feud between the Blake siblings.  They were always so close, always, looked out for one another, and had each others’ backs.  Something must have came between them to cause such an explosion.  There is no other explanation  for it.   Hopefully, they will reconcile their differences and be strong once again.   THEY HAVE TO BE!  I am still very much breathless after viewing the trailer multiple times. I don’t know for certain if I will ever recover.

Be sure to check back tonight as I will have screen caps of the trailer up in the gallery, and tweet your reactions and feels to Grounders Source or leave a comment. On December 20th, it will be Bobby’s 31st birthday!  So, Grounders Source would love to do something special for him.  Like Eliza Taylor’s birthday, fans sent in their own favourite photos, fan art, and personal messages, and they all created a video.  Now, I like to be as creative and expansive with any project.  This is what makes it fun and more sentimental, and personal.  You can all send in a special piece, whether it would be your own fan art, messages, favourite photo of Bobby, video clip, etc.  Here are the guidelines:

I cannot wait to see all of your lovely work!

First and foremost, I would like to thank everyone who has entered The 100 Writing Contest!  I will go through and read each entry soon, and the top five will be posted this week.  So, good luck to the contestants!

Everyone at Grounders Source wants to wish Eliza Taylor a very spectacular birthday today!  Fans emailed and tweeted me wishes and photos as part of a special birthday project just for Eliza.  Thank you all who have contributed!  I hope that you love the video card that I made!

All through December, we will be raising funding for the ASPCA in honor of Bob Morley’s birthday.  You can make an impact for the welfare of animals by visiting the donation page.

The Bob’s Love Campaign on ASPCA

The material of Grounders Source is original and must be accredited if it is used. This site is professionally run, with authorized sources, support from cast and crew, and will not have any fraudulent or decomposing information. The site does not and will not endorse and/or tolerate any degree of discrimination or hate. Anyone who posts such demean material will be punished. ©2014-2019 Grounders Source